North Korea may conduct a nuclear test in connection with a key anniversary on April 15 to mark the birthday of the country's late founder, U.S. special envoy to North Korea Sung Kim said Wednesday.

"I think it could be another missile launch, it could be a nuclear test," Kim said in a phone briefing, while noting that he did not want to speculate too much over which provocative action to expect from Pyongyang.

Following a slew of missile tests earlier this year, North Korea test-fired an intercontinental ballistic missile on March 24. It was the first such launch since November 2017 and marked the end of the country's self-imposed moratorium on ICBM launches dating back to April 2018. 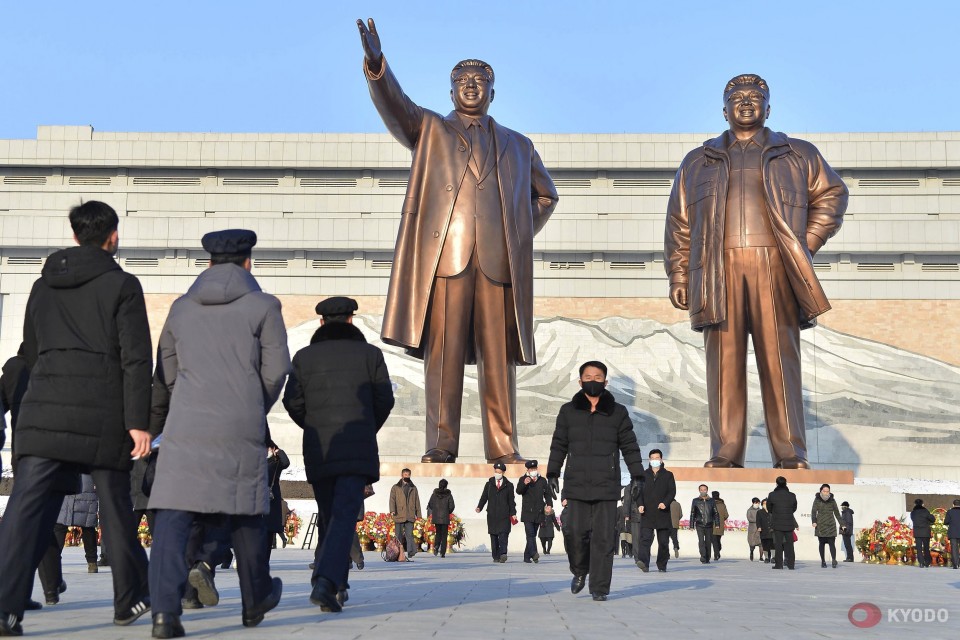 People visit the statue of Kim Jong Il (R) to lay flowers as North Korea marks the 80th anniversary of the birth of the late leader in Pyongyang on Feb. 16, 2022. To the left is the statue of late president Kim Il Sung. (Kyodo)

Pyongyang has not tested nuclear devices since September 2017, but speculation is growing that the secretive country is also moving closer to scrapping its moratorium on nuclear tests. On April 15 this year, North Korea will mark the 110th anniversary of the birth of Kim Il Sung, its founder and the grandfather of current leader Kim Jong Un.

Meanwhile, North Korean official media reported Tuesday that Kim Jong Un's sister, Kim Yo Jong, has threatened to use nuclear weapons against South Korea if Seoul opts for a military confrontation with Pyongyang.

Sung Kim expressed his concerns about Kim Yo Jong's statement, telling reporters he hopes that "instead of making such provocative statements" Pyongyang will focus on "some serious engagement" to promote stability on the Korean Peninsula.

The U.S. envoy also emphasized that the administration of President Joe Biden harbors "no hostile intent" toward the North and that it is willing to listen to Pyongyang's "full range of concerns" while seeking to chart a path forward on how to achieve progress toward denuclearization.

But Sung Kim admitted that so far the administration has not received any response from Pyongyang, which he called "very disappointing because we have sent several messages, both public and private, inviting them to a dialogue without any conditions."

"I still hope that they will respond positively to our many outreaches, but thus far, they have not," he added.

North Korea has no diplomatic relations with the United States. Their direct negotiations have been stalled for more than two years due largely to the gap between Washington's insistence on denuclearization and Pyongyang's demand for sanctions relief.