Finance chiefs of the Group of 20 major economies will likely do little more than highlight the deep rift that has formed among member nations next week when the forum holds its first ministerial-level meeting since Russia's invasion of Ukraine.

G-20 members, including Russia and the United States, have a plethora of issues to negotiate if they hope to pull the world's economy out of the COVID-19-induced doldrums and mitigate the impact of the Ukraine crisis.

U.S. President Joe Biden said in late March that Russia should be expelled from the G-20 framework as a response to its invasion of Ukraine, and Treasury Secretary Janet Yellen said last week the United States will boycott some G-20 meetings if Russian officials show up. 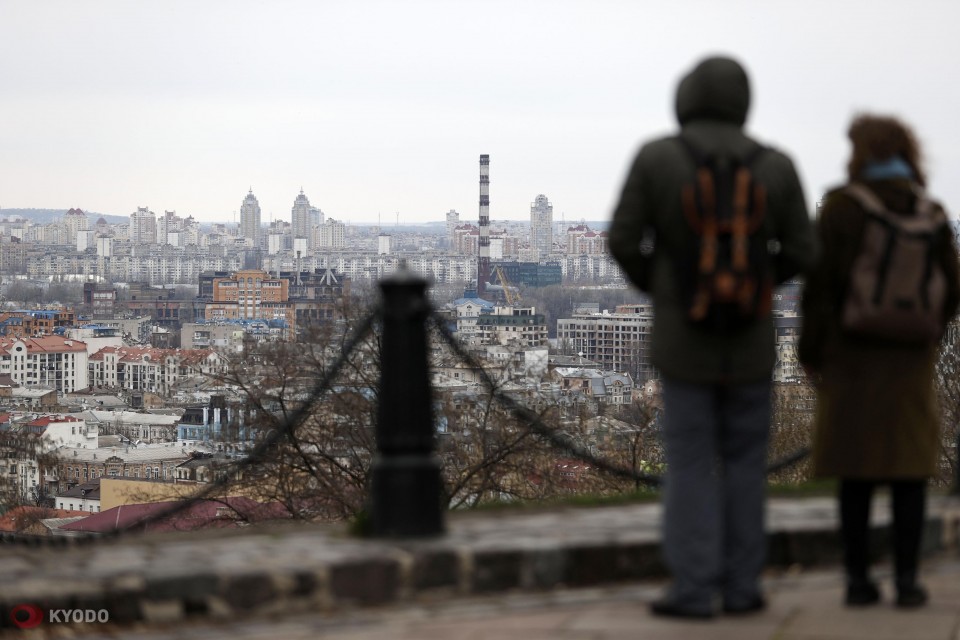 Photo taken April 10, 2022, shows a view of Kyiv from a high point after Russian troops completed their withdrawal from around the Ukrainian capital. (Kyodo) ==Kyodo

Russian Finance Minister Anton Siluanov has reportedly confirmed he will attend the gathering virtually, which means a clash is likely.

Russian President Vladimir Putin's spokesman Dmitry Peskov has said that the G-20 is an important format but his nation's exclusion would not be "fatal" given most members are "in a state of economic war with us," according to Russia's Tass news agency.

The G-20 meeting involving finance ministers and central bank governors will convene on Wednesday on the sidelines of the spring sessions of the International Monetary Fund and the World Bank in Washington.

"The G-20 has played a role in identifying global problems and raising awareness of them," Atsushi Takeda, a chief economist of the Itochu Research Institute, said. "But this time, whether it can function is entirely dependent on who will be at the meeting."

The potential division among members, who represent 80 percent of the world's gross domestic product, would serve as a significant setback at a time when coordinated efforts are vital to address emerging and ongoing challenges, economists say.

The economic outlook has been dimmed by high and persistent inflation, only exacerbated by Russia's late-February attack on Ukraine which caused energy and other commodity prices to surge.

The tightening of U.S. monetary policy, which began in March as a response to inflation which has been increasing at its fastest rate in more than 40 years, also puts emerging economies' currencies at risk of weakening and thus causing their foreign debt burden to increase.

Russia's potential default on its foreign debt, caused to come extent by Western sanctions, would also take a heavy toll on the financial sector.

The Group of Seven used to be the Group of Eight until Russia was expelled amid global outrage at its annexation of Crimea in Ukraine in 2014.

But there is no mechanism to exclude a country from the G-20, with a Japanese government source describing it as "difficult to bar Russia from the G-20 framework."

"If Russia attends the meeting, we must hold a majority and hurl diatribes toward it," the source added.

Brazil, India, China and South Africa, which along with Russia form the BRICS forum, have continued to support Moscow's participation in the G-20.

China's Foreign Minister Wang Yi said recently that no one has the right to break up the G-20. Brazilian Foreign Minister Carlos Franca has said his country clearly opposes excluding Russia from the group.

Australian Prime Minister Scott Morrison in late March called Putin's intention to attend the G-20 summit in Indonesia later this year "a step too far." Canadian Prime Minister Justin Trudeau has said Russia cannot be a constructive partner in the G-20 because of its invasion of Ukraine, according to Reuters.

The gathering in Washington would only offer another opportunity for Moscow and Western countries to play the blame game, economists say.

"The G-20 meeting may become an event that symbolizes a crack in the international community made by Russia's invasion," said Tsuyoshi Ueno, senior economist at NLI Research Institute.

Even with Russia absent, tough discussions were expected on surging energy prices between exporters and importers as well as on coordinated efforts for growth amid uneven recovery from the pandemic fallout, he said.