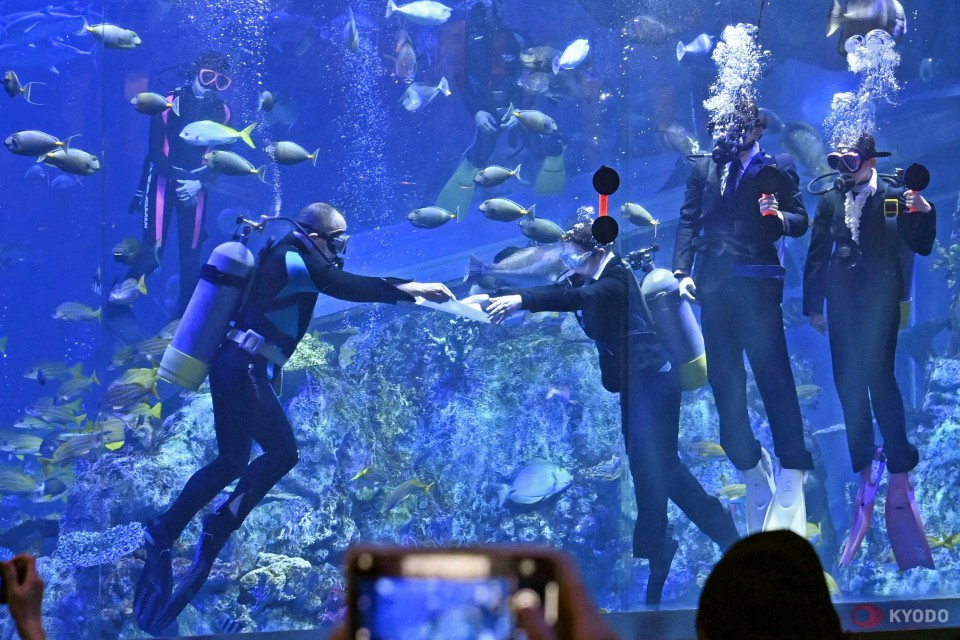 A new employee (2nd from L) of Toba Aquarium in Mie Prefecture, central Japan, receives a letter of appointment during an underwater initiation ceremony on March 31, 2022. (Kyodo) ==Kyodo

TOKYO - Japan on Friday eased its travel warning for 106 nations including the United States and India over the coronavirus pandemic, no longer recommending Japanese nationals against traveling to the areas.

The Foreign Ministry lowered its travel advisories for those countries also including Britain, France and Germany from the second-highest Level 3 on its four-point scale to Level 2, under which Japanese citizens are asked to refrain from all nonessential overseas travel.

TOKYO - Business confidence among major Japanese manufacturers worsened for the first time in seven quarters in March, hurt by energy and raw material costs that surged on Russia's invasion of Ukraine and pandemic-related supply bottlenecks, the Bank of Japan's Tankan survey showed Friday.

The key index measuring sentiment among companies such as automakers and electronics makers dropped to 14 in March from 17 logged three months earlier, the lowest level since June 2021. It was above the average market forecast of 11 in a Kyodo News survey.

TOKYO - The Japanese government on Friday expanded sanctions against North Korea by newly freezing the assets of four Russian organizations and nine individuals of the reclusive Asian country for their involvement in Pyongyang's nuclear and missile development programs.

Japan to allow up to 10,000 visitors daily from April 10: spokesman

TOKYO - Japan will raise its daily cap on overseas arrivals to around 10,000 from April 10, up from the current 7,000, the top government spokesman said Friday, as the country gradually relaxes its coronavirus border controls.

The latest move reflects the growing need for entry among returning Japanese nationals and foreign visitors, including students who wish to stay in Japan. But it still does not apply to foreign tourists.

TOKYO - The government said Friday that Seiko Noda, minister in charge of gender equality and children's policies, has been infected with the novel coronavirus, the first confirmed case among incumbents of the Japanese Cabinet.

Tokyo Gov. Yuriko Koike the same day warned that the more transmissible BA.2 form of the Omicron variant has been becoming dominant "rapidly" in new infections recently in the capital.

SHANGHAI - The western part of Shanghai, China's financial and business hub, began to be locked down Friday to carry out mass COVID-19 testing, as new infections with the novel coronavirus has been resurging recently.

Across the mainland, 7,229 people were confirmed to be infected with the virus on Thursday, while 4,502 new cases were recorded on the same day in Shanghai, with a population of around 24.9 million, according to Chinese health authorities.

TOKYO - New car sales in Japan declined for the third straight year in fiscal 2021, down 9.5 percent from a year earlier, as production slowed on shortages of semiconductors and other components amid the coronavirus pandemic, industry bodies said Friday.

A total of 4,215,826 cars were sold in the year ended Thursday, according to the Japan Automobile Dealers Association and the Japan Light Motor Vehicle and Motorcycle Association.

TOKYO - New recruits at companies, public offices, and other organizations in Japan began work Friday, the start of the fiscal year, with some firms reviving in-person ceremonies for the first time since the outbreak of the coronavirus pandemic more than two years ago.

Toyota Motor Corp., based in Toyota, Aichi Prefecture, and Osaka-based Kansai Electric Power Co. were among a number of major companies holding face-to-face entrance ceremonies again at their headquarters.