Ukrainian President Volodymyr Zelenskyy accused Russian forces invading Ukraine of committing "the most terrible war crimes" since World War II and demanded Moscow's accountability for cruel acts by its soldiers as he spoke via video Tuesday at a U.N. Security Council session on the military aggression now in its second month.

"The Russian military searched for and purposefully killed anyone who served our country," Zelenskyy said through a translator. "They killed entire families, adults and children. And they tried to burn the bodies."

He explained the gruesome nature of the crimes against Ukrainian civilians in the town of Bucha, including the raping of women in front of their children, torture and dismemberment, and the throwing of people into wells. 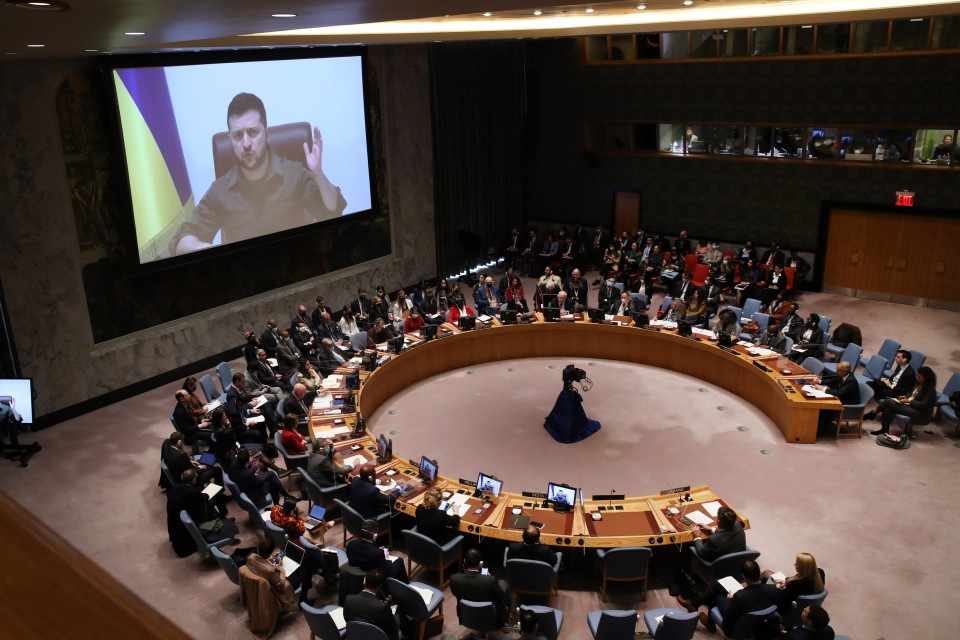 On Monday, following his trip to the town near Kyiv, Zelenskyy indicated that Russian troops had committed genocide there, with Ukrainian authorities finding the bodies of 410 civilians after the withdrawal of Russian troops.

Footage showing the scattered bodies of civilians on the streets of Bucha has drawn strong condemnations from the international community over the alleged war crimes. Russia has denied the allegations.

Zelenskyy also called for reform of the United Nations, saying the Security Council has failed to achieve its primary function due to Russia converting its veto power into a right to act with impunity.

Noting the brutal acts of the Russian troops, he said, "It is done by a member of the United Nations Security Council."

"It is obvious that the key institution of the world, which must ensure the coercion of any aggression to peace, simply cannot work effectively," Zelenskyy added.

"The Russian military and those who gave them orders must be brought to justice immediately for war crimes in Ukraine. Anyone who has given criminal orders or carried them out by killing our people will be brought before a tribunal" similar to the Nuremberg trials of Nazi war criminals after World War II, Zelenskyy said.

In his address at the Security Council meeting, U.N. Secretary General Antonio Guterres said, "The war in Ukraine is one of the greatest challenges ever to the international order and the global peace architecture founded on the United Nations Charter."

Russia has been involved in the war "with several aims, including redrawing the internationally-recognized borders between the two countries," he said.

"Far beyond Ukraine's borders, the war has led to massive increases in the prices of food, energy and fertilizers, because Russia and Ukraine are linchpins of these markets," the U.N. chief said, adding that the crisis has also affected global supply chains and put more pressure on developing countries.

All five permanent members of the Security Council -- Britain, China, France, Russia and the United States -- are nuclear weapons states and each holds veto power over the council's actions.

The five nations have often been divided over how to respond to security issues, from the Ukraine crisis to North Korea's nuclear and missile threats, with China and Russia preferring steps other than those proposed by the remaining three members.

"I deeply regret the divisions that have prevented the Security Council from acting not only on Ukraine, but on other threats to peace and security around the world," Guterres said.

He urged the council "to do everything in its power to end the war and to mitigate its impact."

Russia's war in Ukraine has continued since its military operation started on Feb. 24 due to stronger-than-expected resistance by Ukraine with the help of members of the North Atlantic Treaty Organization.