The International Monetary Fund on Tuesday projected this year's global economic growth to be 3.6 percent, slashing its January forecast by 0.8 percentage point due to the impacts of Russia's invasion of Ukraine and the subsequent sanctions imposed on Moscow.

Many major advanced economies faced downgrades in their growth outlooks, including the United States and Japan, as the war drives up energy and food costs around the world, while China's economy was forecast to slow more than earlier expected amid its stringent restrictions to cope with the coronavirus pandemic. 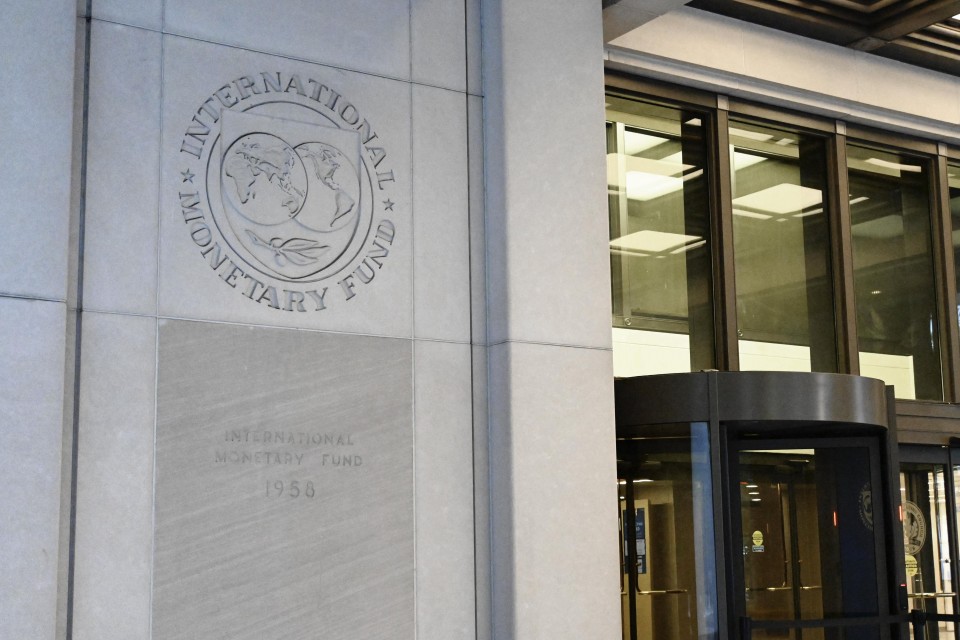 Photo shows the building of the International Monetary Fund headquarters in Washington on Aug. 11, 2021. (Kyodo)

"The war will severely set back the global recovery, slowing growth and increasing inflation even further," IMF chief economist Pierre-Olivier Gourinchas said in the semiannual World Economic Outlook report, the first issued since Russia began its invasion of Ukraine in late February.

Ukraine's real gross domestic product is estimated to contract by 35 percent in 2022 from the previous year, while that of Russia will fall 8.5 percent as its central bank and major domestic financial institutions are hit by sanctions, with some large economies enacting oil and gas embargoes.

The war in Europe erupted at a time when the global economy was yet to fully recover from the coronavirus pandemic, as the threat from the highly contagious Omicron variant was only just receding, while concerns were growing over rising inflation due partly to pandemic-linked supply disruptions.

The war adds to the series of supply shocks that have struck the global economy in recent years and the economic effects are spreading "far and wide," the IMF said, citing Russia's role as a major supplier of oil, gas and metals, and together with Ukraine, of wheat and corn.

The global growth forecast for 2023 was also revised downward by 0.2 point to 3.6 percent.

For the United States, which has only limited economic links with Russia, the outlook for 2022 was cut by 0.3 point from the January estimate to 3.7 percent, given the faster-than-expected tightening of monetary policy to tamp down inflation and the impact of lower growth on trading partners because of disruptions resulting from the war.

Japan, the world's third-largest economy and a major crude importer, is expected to see rising oil prices weigh on private consumption and investment, a factor that pushes down this year's growth estimate by 0.9 point to 2.4 percent, according to the IMF.

But the outlook for 2023 was upgraded by 0.5 point to a 2.3 percent growth, reflecting the Asian country's recovery from the pandemic after the Omicron variant spread rapidly earlier this year and cooled consumer sentiment.

China's forecast for 2022 stood at 4.4 percent, a 0.4-point downgrade from January, as China's "zero COVID" strategy has brought repeated mobility restrictions and localized lockdowns, including in key manufacturing and trading hubs such as Shenzhen and Shanghai.

The latest lockdowns in China could cause "new bottlenecks in global supply chains," the Washington-based institution warned in the report, adding that the output of the world's second-largest economy is also overshadowed by weaker external demand stemming from the war.

The euro area's GDP growth in 2022 was revised down by 1.1 points to 2.8 percent, with the biggest downgrades seen in economies such as Germany and Italy which have relatively large manufacturing sectors and greater dependence on energy imports from Russia, the IMF said.

World trade volumes were projected to increase 5 percent this year and 4.4 percent in 2023, marking respective decreases of 1.0 and 0.5 point from the January forecasts, according to the report.

For this year, inflation is projected to be 5.7 percent in advanced economies and 8.7 percent in emerging market and developing economies -- 1.8 and 2.8 points higher than the earlier outlook, respectively.

As the United States, the European Union and U.S. allies including Japan step up efforts to isolate Moscow economically and technologically, the IMF also warned of the "permanent fragmentation" of the world economy into geopolitical blocks with different technology standards and cross-border payment systems.

Such a "tectonic shift" would entail high adjustment costs as supply chains are reconfigured, while representing a major challenge to the "rules-based framework" that has governed international and economic relations for the last 70 years, the report said.