U.N. Secretary General Antonio Guterres and Russian President Vladimir Putin on Tuesday agreed "in principle" on the involvement of the United Nations and the International Committee of the Red Cross in the evacuation of civilians from a besieged steel plant in Mariupol, amid the ongoing war in Ukraine.

It was the secretary general's first visit to Moscow since the Russian invasion began on Feb. 24. Putin said recently that Russian forces had effectively seized Mariupol, a key port city in southeastern Ukraine, but the United States has expressed doubt about the claim. 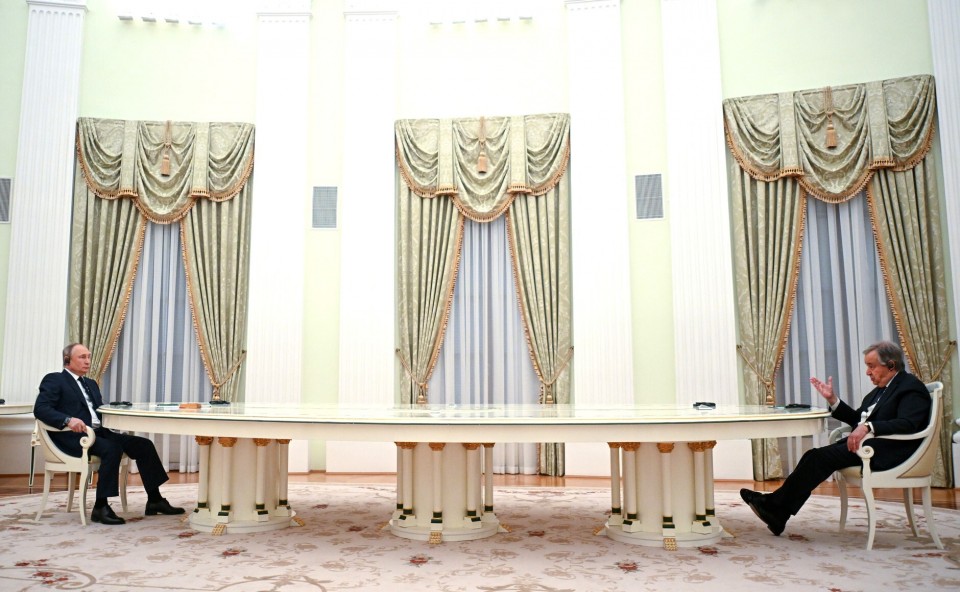 Mariupol is located between Ukraine's Donbas region, which is partly controlled by Russian-backed separatists, and the Crimean Peninsula, annexed by Moscow in 2014.

The statement said that following the agreement, discussions would be held between the U.N. humanitarian office and Russian Defense Ministry on the evacuation.

Around 1,000 civilians are estimated to be in the plant, where Russian troops are continuing to face Ukrainian resistance.

More than 5 million people have fled Ukraine since the start of the war. Several attempts to create evacuation corridors for civilians to leave Mariupol have failed.

In response to Guterres' concern over the civilians left in the steel plant, Putin was quoted by Russian state television as saying that fighting there had ended and any remaining civilians were the responsibility of Ukrainian forces.

In separate talks with Russian Foreign Minister Sergey Lavrov in Moscow, Guterres proposed the launch of a Humanitarian Contact Group to ensure the safe evacuation of civilians from war-affected areas.

"We urgently need humanitarian corridors that are truly safe and effective and that are respected by all to evacuate civilians and deliver much-needed assistance," the U.N. chief told a press conference after the meeting.

Guterres said he hopes establishing such a group would bring Russia, Ukraine and the United Nations together "to look for opportunities for the opening of safe corridors, with local cessations of hostilities, and to guarantee that they are actually effective."

Describing his talks with Lavrov as "a very frank discussion," Guterres indicated that they had failed to narrow differences over the steps to be taken to end the war in Ukraine. He reiterated the U.N. call for "cease-fires to protect civilians and to facilitate a political dialogue to reach a solution."

Guterres is scheduled to visit Ukraine and meet with President Volodymyr Zelenskyy on Thursday.