Japanese Foreign Minister Yoshimasa Hayashi on Sunday observed a border checkpoint in Medyka in southeastern Poland, where Ukrainian refugees have been arriving as Japan prepares to bolster humanitarian aid for the Eastern European country besieged by Russian aggression.

Having arrived in Poland on the previous day as a special envoy of Prime Minister Fumio Kishida, Hayashi also visited a refugee reception center before moving on to Rzeszow, where Japan has set up a temporary liaison office. 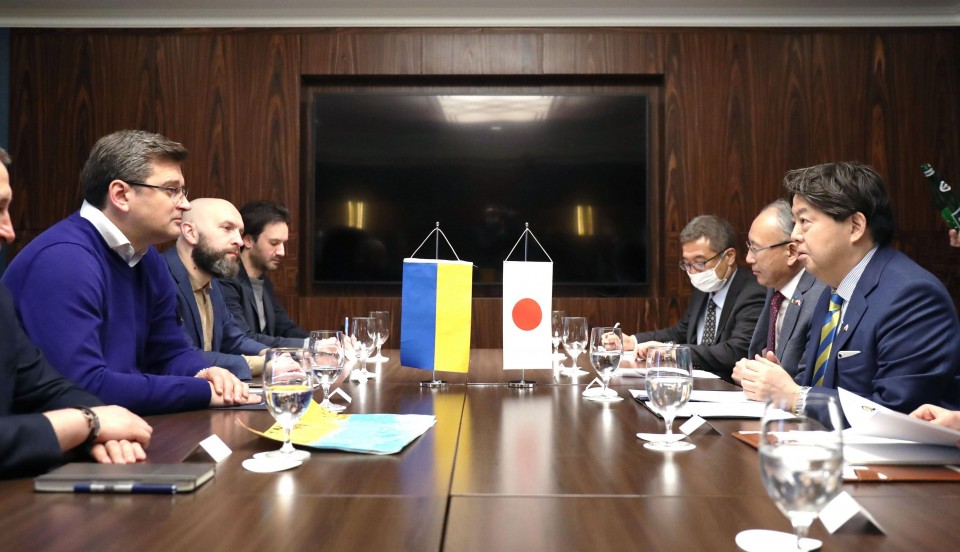 On Saturday, he held talks with his Ukrainian counterpart Dmytro Kuleba, assuring him of Tokyo's "firm resolve" to assist Ukraine.

During their meeting in the Polish capital of Warsaw, Hayashi said Japan is with the Ukrainian people and prepared to provide more humanitarian aid to civilians whose lives have been upended by Russia's invasion, according to the Foreign Ministry.

Hayashi also said the international community must act "unitedly and resolutely" against Russia, which invaded Ukraine more than a month ago, the Japanese ministry said.

Kuleba, who was given drawings of Japanese children hoping for peace in Ukraine as a gift, said in response that his country is appreciative of Japan's support and sanctions on Russia, the ministry said.

Hayashi plans to take Ukrainian evacuees to Japan on a government plane as he completes his five-day trip.

Following the meeting with Kuleba, Hayashi visited a shelter for Ukrainian refugees in Warsaw, where he learned from them what kind of help they are seeking.

Hayashi told reporters that the Japanese government will provide "maximum support so that they can return to their original lives as soon as possible" and that Tokyo is ready to airlift those wishing to come to Japan.

The number of evacuees traveling to Japan with Hayashi could be around 30, according to sources familiar with the matter.

Japan came up with the plan of using the government plane as airfares have skyrocketed since the invasion started on Feb. 24, making it difficult for Ukrainians now in Poland to flee onward to Japan even if they wish, according to the sources.

Hayashi's visit is aimed at showing Japan's commitment to global efforts to help Ukraine and Poland, which has received more than 2.3 million refugees from the war-torn country.

Japan accepted a total of 337 Ukrainian evacuees between March 2 and Wednesday, according to the Immigration Services Agency of Japan.