A hospital in eastern Japan has introduced a new and welcome approach to the fight against alcoholism, bringing an optional abstinence requirement while working to remove the stigma often associated with those who seek treatment for a drinking problem.

Started at Kitaibaraki City Hospital in Ibaraki Prefecture by the University of Tsukuba about three years ago, it has been attracting patients from both inside and outside the prefecture nearby Tokyo. 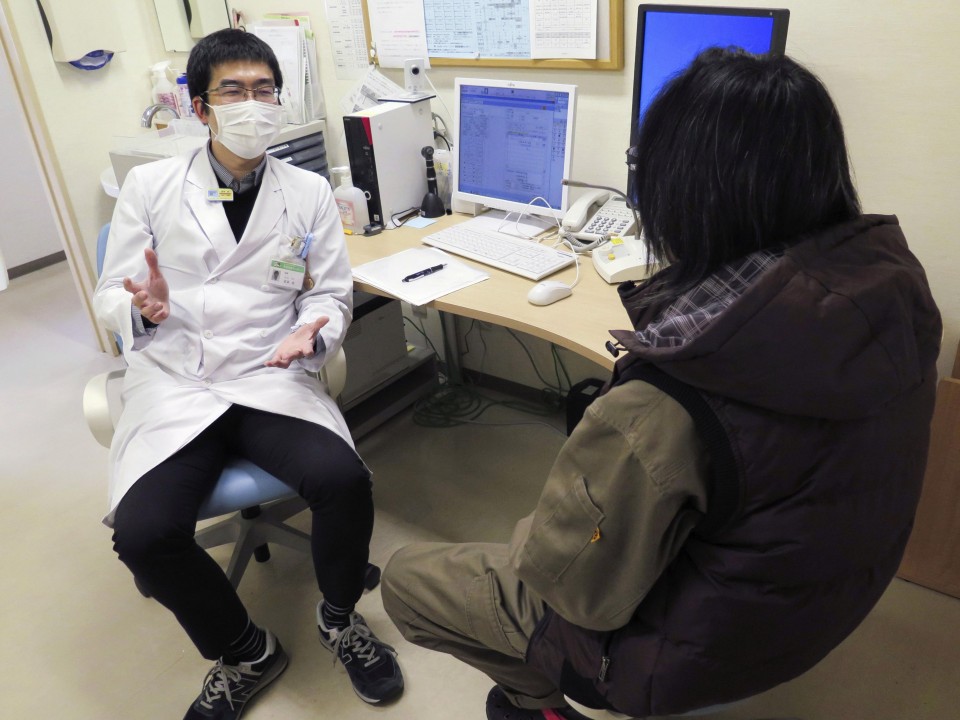 University of Tsukuba associate professor Hisashi Yoshimoto (L) speaks with a patient who has come to the alcohol reduction outpatient ward for a consultation on March 23, 2022, at Kitaibaraki City Hospital in Ibaraki Prefecture, north of Tokyo. (Kyodo)

With coronavirus pandemic stresses leading to more and more people hitting the bottle at home, the person in charge of the ward says it offers those worried about excessive drinking "no-pressure consultations."

The relaxed approach is a marked change from how alcoholism is treated in Japan, generally, with those seeking help often admitted to psychiatric wards -- considered socially unacceptable in a country in which people are careful to keep up a veneer of respectability.

On the morning of March 23, a man in his 40s from the prefectural capital of Mito visited the ward for alcohol reduction at the Kitaibaraki Center for Family Medicine. He was hospitalized for alcohol addiction last year but fell off the wagon during the year-end and New Year holidays.

"I wish I could stop drinking once and for all," the man said during his consultation with Hisashi Yoshimoto, associate professor at the university in charge of the program.

However, instead of admonishing the man for being weak or a failure, Yoshimoto said, "As long as you can control your volume, it's not bad. People have relapses, so don't beat yourself up about it."

Surprised by Yoshimoto's judgment-free response, the patient said, "Every doctor I've met till now has just repeated the same thing: 'You have to stop drinking.'"

The outpatient ward for alcohol reduction was opened in January 2019 by Yoshimoto, who studies the relationship between alcohol consumption and health disorders, establishing a relatively low bar for patients to seek out checkups and follow-up examinations when they feel alcohol is a problem.

Instead of pressuring patients to quit drinking right away, doctors set a target with their patients to reduce their alcohol consumption. The man from Mito agreed with Yoshimoto that he should cut down on drinking based on results from a blood screen and consultations, among other procedures.

Being part of the general medical ward of the hospital that treats a wide range of ailments, rather than the psychiatry department which only focuses on mental disorders, the program is more attractive to those looking for a path out of their alcohol addiction.

According to Yoshimoto, alcoholism in Japan is categorized as a mental disease and is thus usually treated by psychiatrists. But for this reason, many patients are reluctant to receive treatment for fear of being labeled an "addict" or a person suffering from a mental disorder.

Yoshimoto wants his patients to feel at ease when they come for consultations. "Ideally, they can visit us if, for instance, they have a bad test result for liver function in a health checkup" or those who think they are verging on becoming an alcoholic.

The outpatient alcohol reduction program has spread to three hospitals in the prefecture. Some 150 patients in Ibaraki, Fukushima, Tochigi and Tokyo, among other prefectures, have visited the wards.

Some patients became worried about their drinking when they found themselves spending most of their spare time at home during the pandemic. While idle, they began regularly having a tipple that turned into more.

Thirty percent of patients in the program have quit drinking, while half are on a pathway to cutting back, says Yoshimoto, who is also considering starting online medical checkups.

"As long as humans exist, alcohol will not go away. We want to convey the message of people learning the best way to handle it across society," he said.