The government is in consultation with other members of the Group of Seven advanced nations, and the specifics of new punitive steps will be announced possibly Friday, Kishida told reporters, hours after the United States slapped a new set of sanctions on Russia.

Underscoring its solidarity with Ukraine, the government will continue to extend humanitarian assistance and secure seats on direct flights linking Poland and Japan starting this week for evacuees from Ukraine, he said. Poland has provided refuge to such people.

"The killings of innocent civilians are war crimes. I've been in deep shock." Kishida said, using the term "war crime" for the first time to describe the alleged atrocities in Ukraine.

"The aggression and war crimes should never be tolerated," he said.

The United States on Wednesday expanded its sanctions regime to target key Russian banks and President Vladimir Putin's two daughters, and include a ban on new investment in Russia over Moscow's continued invasion of Ukraine.

Since Russia launched its Ukraine onslaught on Feb. 24, Japan has announced asset freezes on Putin and his subordinates, business oligarchs and some banks.

Tokyo also joined the United States and European nations in removing some Russian banks from the SWIFT international payment network and announced its decision to strip Russia of its "most favored nation" status that has given Moscow the best terms under World Trade Organization rules.

World leaders have been stepping up criticism in the wake of reports of Ukrainian civilians killed near Kyiv following the withdrawal of Russian troops. Russia has denied killing civilians, however.

Japan has already asked the International Criminal Court to investigate the situation in Ukraine after the Russian invasion. 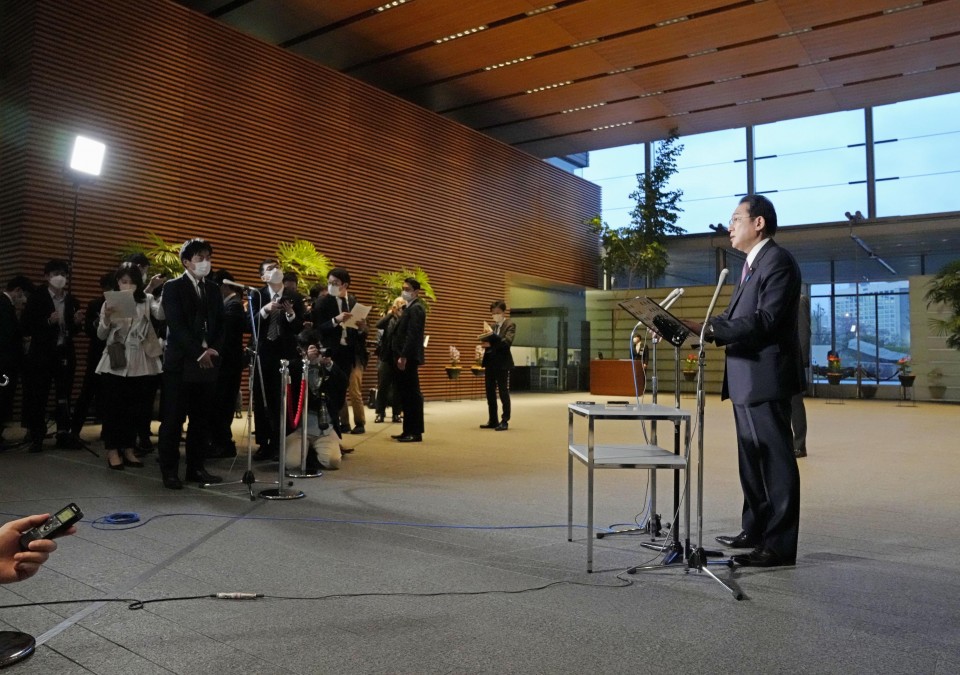 Japan has hardened its stance on Russia in the absence of tangible progress in decades-long negotiations for a bilateral territorial dispute and the signing of a postwar peace treaty.

At the same time, Tokyo has been ramping up its humanitarian assistance to the people of Ukraine, criticizing the unilateral use of force by Russia to change the status quo in breach of international law.

In a rare move for a country known for its strict immigration and refugee policy, Japan has begun taking in evacuees from war-torn Ukraine, bringing 20 to Japan on a government plane earlier this week.

Over 400 evacuees have arrived in Japan with hundreds of companies and municipalities offering to assist the evacuees.