India has denied a request by Japan to allow an Air Self-Defense Force plane to collect aid supplies for Ukrainian refugees, a lawmaker said Thursday, derailing Tokyo's plan for the flight later this month.

Under the original schedule, a C-2 transport plane was supposed to pick up relief items such as blankets stockpiled by a U.N. agency in India and the United Arab Emirates, and take them to Poland and Romania, both of which border Ukraine and have welcomed refugees from the war-torn country. 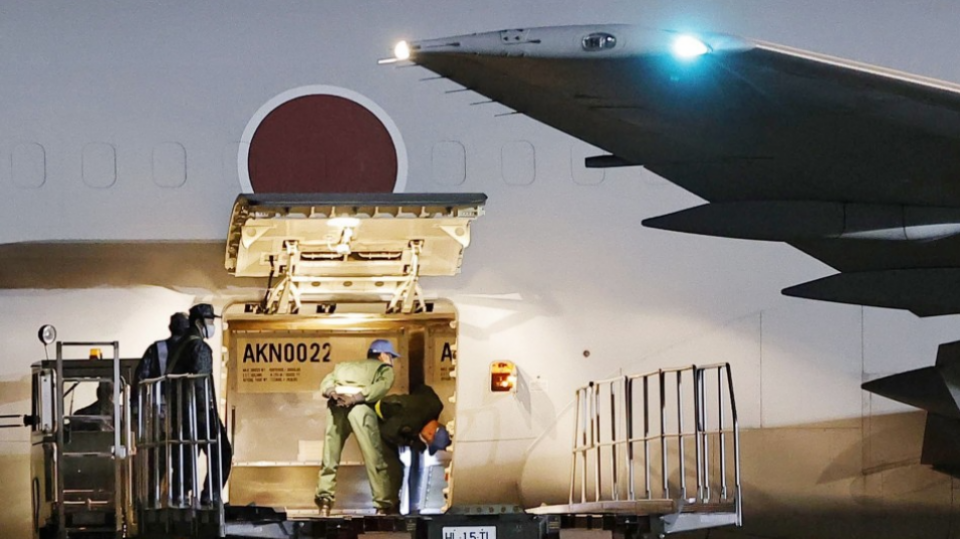 Preparation is under way at the Japanese Air Self-Defense Force's Komaki base in Aichi Prefecture, central Japan, on March 8, 2022, to airlift SDF bulletproof vests and helmets to Ukraine. (Kyodo)

"We had received a request from Japan for permission to land in Mumbai to pick up humanitarian supplies," Arindam Bagchi, a spokesman for India's ministry of external affairs, said at a press conference.

He said India had only approved Japan's use of a commercial plane to collect the items, but not the ASDF aircraft's landing.

India, which has traditionally maintained close military ties with Russia, has refrained from condemning Moscow over its invasion of Ukraine that began on Feb. 24.

However, the country has provided aid supplies including medicines and medical equipment for Ukraine through Poland and Romania since March, according to media reports. The assistance was given following a request from the Ukrainian government.

A Japanese government official said at a Liberal Democratic Party meeting that India had agreed at a working level to allow the transport plane to land, but it suddenly withdrew consent Wednesday, according to the lawmaker.

Prime Minister Fumio Kishida's Cabinet was slated Friday to formally approve the plan to send the aircraft, possibly late this month, but the flight will be put off following India's withdrawal of consent, said the ruling party lawmaker who took part in the meeting.

Some of those at the LDP policy meeting accused the government of failing to take into account the possibility that India, which is highly dependent on Russian military and energy supplies, could reject the plan, according to the lawmaker.

Japan will still try to dispatch the ASDF plane to transport aid supplies for Ukrainian refugees. The plan was made following a request from the Office of the U.N. High Commissioner for Refugees.

Defense Minister Nobuo Kishi said earlier this week that Japan will also use commercial flights to provide Ukraine with masks and clothing to protect against chemical weapons, as well as civilian drones, following a request from the Ukrainian government.