Kishida and Cassis, who doubles as foreign minister, also agreed in Tokyo that Russia should be held responsible for its killing of Ukrainian civilians, urging Moscow to heed the voice of the global community and stop the invasion, according to the ministry. 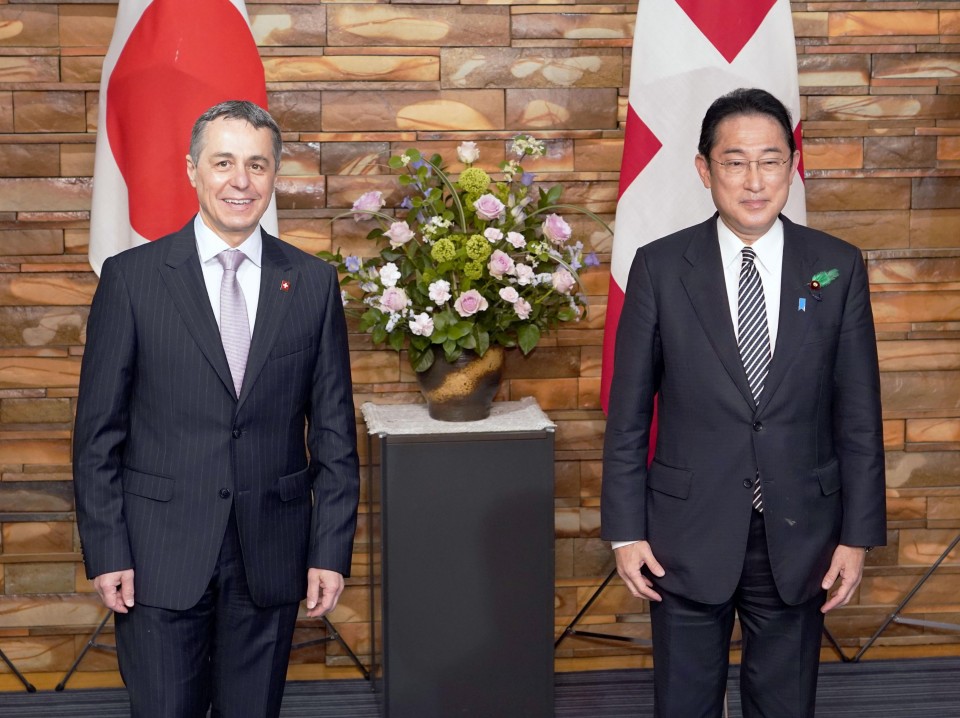 Japanese Prime Minister Fumio Kishida (R) and Ignazio Cassis, president and foreign minister of Switzerland, pose for photos ahead of their talks at the premier's office in Tokyo on April 18, 2022. (Kyodo) ==Kyodo

Cassis was quoted as saying that Switzerland will provide maximum support for Ukraine while continuing severe sanctions against Russia. He also expressed hope to strengthen cooperation with Japan in the fields of economy, science and technology.

Switzerland, despite being a non-European Union member and known for its permanent neutrality, moved ahead with imposing sanctions on Russia including freezing assets of President Vladimir Putin, keeping pace with the EU, the United States and Japan, following Moscow's invasion that began Feb. 24.

But the Swiss government has said that its response to the war does not mean it has abandoned its neutrality, and that the country will "not favor any warring party militarily."

The two leaders also discussed North Korea and reaffirmed to work together in dealing with Pyongyang's missile threats and its abductions of Japanese nationals in the 1970s and 1980s, according to the ministry.

Cassis, who is on a six-day visit to Japan through Saturday, later held talks with Foreign Minister Yoshimasa Hayashi. They shared the view that Russia's aggression against Ukraine is a "clear violation of international law."

Hayashi said at a press event after the meeting that he highly appreciates that Switzerland has adopted "as strong sanction measures as those imposed by the EU" against Russia.

The two nations, both candidates for nonpermanent members of the U.N. Security Council for two years from 2023, pledged to step up their cooperation over its reform, according to the ministry.

It is the first trip to Japan for Cassis since becoming Swiss president in January. During his stay in Japan, besides holding meetings with other Japanese ministers, the president is scheduled to attend a business event and visit the western Japan cities of Osaka and Kyoto.

Cassis, who is on a six-day trip to Japan through Saturday, later held talks with Foreign Minister Yoshimasa Hayashi. It is his first trip to Japan since becoming Swiss president in January.

During his stay in Japan, besides holding meetings with other Japanese ministers, the president is scheduled to attend a business event and visit the western Japan cities of Osaka and Kyoto.