Following his team's first-round exit from the NBA playoffs, Yuta Watanabe reflected Friday on a challenging season with the Toronto Raptors.

The 27-year-old Japanese national team forward was not part of coach Nick Nurse's playoff rotation and logged less than three minutes per game throughout the 4-2 series loss to the Philadelphia 76ers. 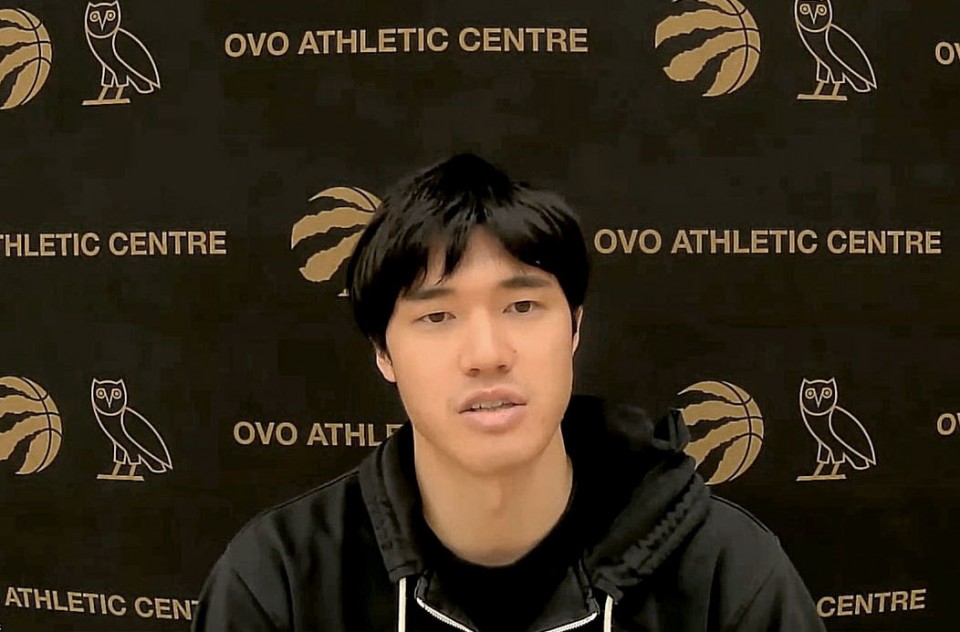 Watanabe also saw limited action in the regular season, playing 38 out of 82 games for a Toronto side that finished fifth in the NBA's Eastern Conference with a 48-34 record.

"There were good times, but there were also hard times where I couldn't play an active part," Watanabe said in an online press conference.

"Despite some big challenges, it was a reasonably satisfying season."

After making the final cut for Toronto's opening-day roster, Watanabe started his fourth NBA season, and second with the Raptors, on a full NBA contract for the first time.

His season highlights included a 26-point, 13-rebound outing against the Cleveland Cavaliers in December, but the defensive specialist also spent time sidelined by COVID-19 and saw his three-point percentage drop from a career-high 40 percent last season to 34.2 percent.

"I can definitely put up better shooting numbers and I'm confident I can make the necessary improvements in the off-season," said Watanabe, who averaged 4.3 points and 2.4 rebounds in just under 12 minutes per game.

"I need to hit 40 percent (from three-point range) to keep my spot."

The Tokyo 2020 Olympian said he discussed his strengths and weaknesses in his postseason interview with Raptors management, who underlined the need for improved shooting.

"I was told my defense was really appreciated and that if I can shoot a higher percentage, I can be a very good player," Watanabe said.

While he barely saw the court in his first playoffs, Watanabe said it was a major learning experience and left him wanting a further taste of the postseason.

"I realized I have to improve more," Watanabe said. "The intensity and level of play in the playoffs is completely different."

"I couldn't get on the court this time, but even from the bench I got a sense of how different things were."