The Japanese yen tumbled to a fresh 20-year low against the U.S. dollar on Tuesday, sliding past the 128 line, amid prospects for a divergence in monetary policy between the Bank of Japan and the U.S. Federal Reserve. 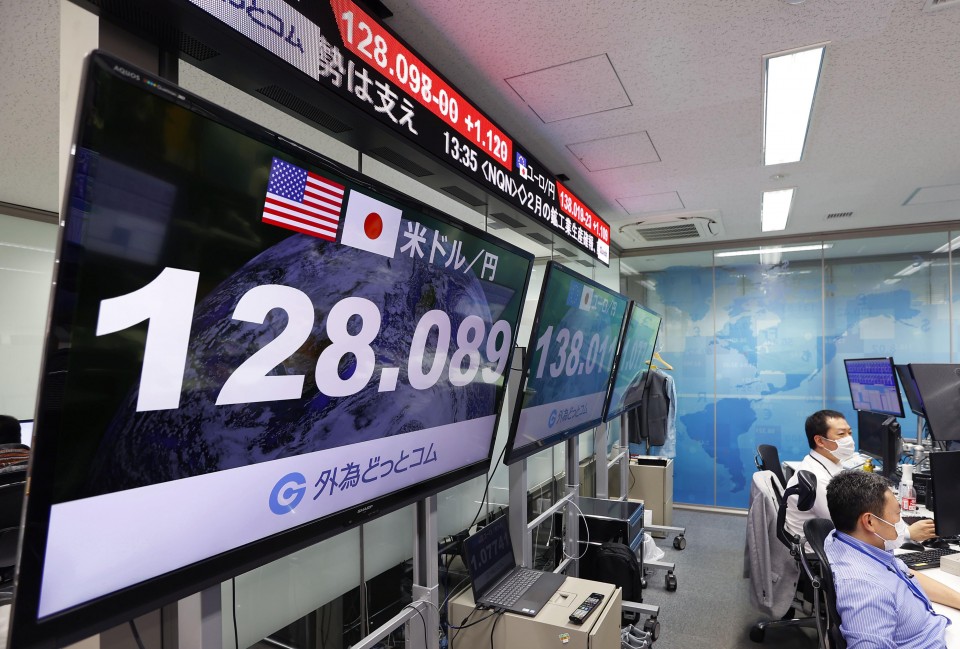 A display at the Tokyo office of money broker Gaitame.com Co. shows the yen tumbling to the 128 level against the U.S. dollar on April 19, 2022. (Kyodo)

Dollar buying was spurred by remarks from Federal Reserve Bank of St. Louis President James Bullard, who on Monday called for increasing interest rates to 3.5 percent by the end of the year to tame inflation.

His comments raised speculation that the U.S. central bank may become more aggressive in tightening its monetary policy as it attempts to tackle soaring inflation, analysts said.

The dollar accelerated its upswing against the yen in the afternoon to surpass 128 yen, its highest level since May 2002, from around the 127 yen line in the morning, additionally driven by the prospects of widening interest rate differentials between Japan and the United States.

Meanwhile, the market showed limited reaction to a remark from Japanese Finance Minister Shunichi Suzuki on Tuesday that the yen's rapid fluctuations are "undesirable."

Market participants have been seeking the dollar in recent weeks on the back of contrasting approaches by the Bank of Japan and the Fed, which last month decided to raise key interest rates for the first time since 2018.

The Japanese central bank, in contrast, has maintained its powerful monetary easing.

A financial data screen in Tokyo shows the U.S. dollar rising above the 128 yen line on April 19, 2022, a level unseen since May 2002 amid the continued weakness in the Japanese currency. (Kyodo) ==Kyodo

On the equities market, the Nikkei index initially opened higher to surpass the 27,000 mark on firm high-tech shares. But it later trimmed gains and briefly fell into negative territory, pulled down by Russia's intensifying onslaught on Ukraine and the upward trend of crude oil prices.

"Stocks were weighed down by Moscow's ongoing attacks on Ukraine, as investors worried about logistics disruptions and their increased negative impact on the global economy," said Shingo Ide, chief equity strategist at the NLI Research Institute.

West Texas Intermediate crude oil futures for May ended Monday at $108.21 per barrel, the highest level in around three weeks, as the climb extended to four trading days and continued to raise concerns over inflation.

Some investors are not optimistic about the upcoming earnings season in Japan, as elevated energy and commodity prices may limit revenue growth, Ide added.

Yoshinoya Holdings dropped 40 yen, or 1.7 percent, to 2,373 yen, as it said Tuesday an executive of its beef bowl restaurant chain has been dismissed over inappropriate remarks about young women.

Trading volume on the Prime Market rose to 961.96 million shares from Monday's 834.81 million.

The yield on the benchmark 10-year Japanese government bond was unchanged from Monday's close at 0.240 percent.