Japan's Defense Ministry has been ramping up its messaging on social media over Russia's invasion of Ukraine as it tries to prepare for "hybrid warfare," which combines conventional weapons and information warfare such as the manipulation of public opinion.

Recognizing that the need to handle disinformation and fake news is a critical security issue as manifested in the Ukrainian crisis, the ministry is creating a new specialist post in April to oversee such matters, while increasing communication over the internet. 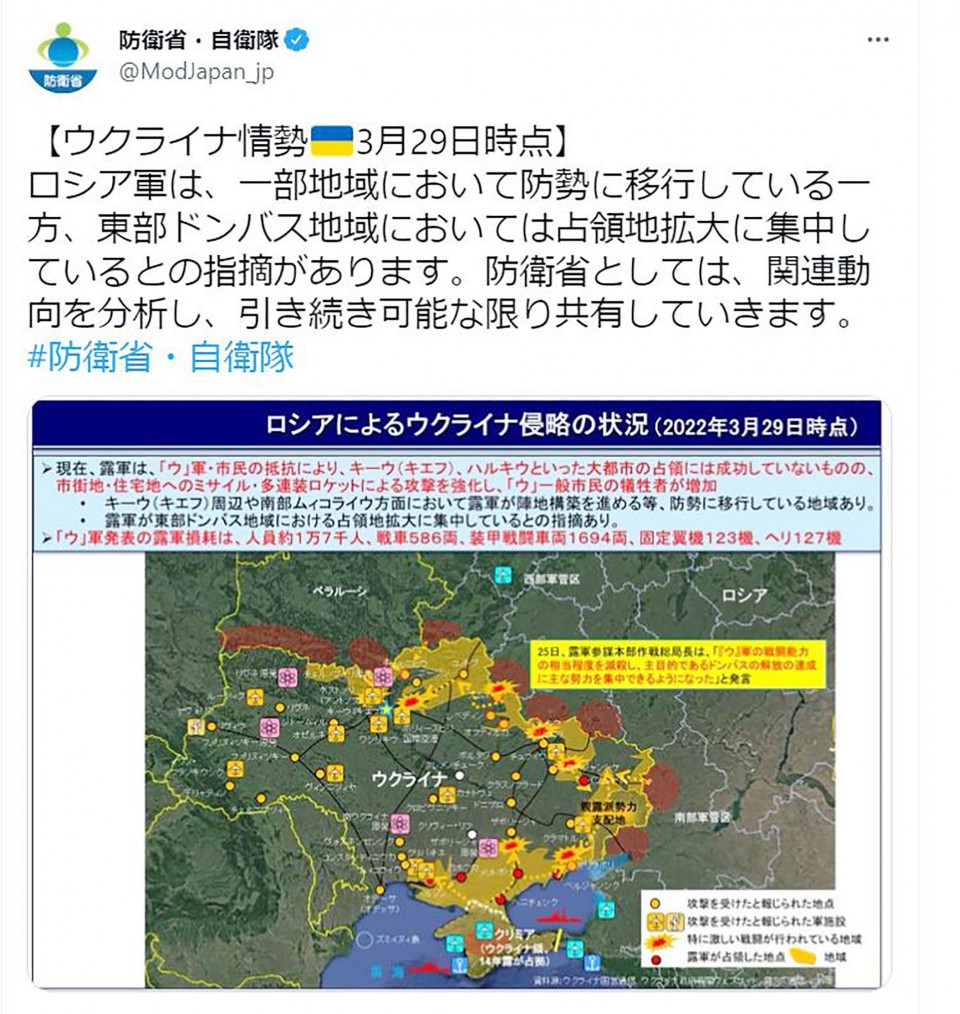 Photo shows a tweet by the Japanese Defense Ministry on March 29, 2022, detailing the situation of Russia's ongoing invasion of Ukraine in Japanese. (Kyodo)

The ministry made its first post on the war on Twitter on March 3, a week after the Russian invasion began, which detailed the situation of the ongoing battles in Japanese. It drew more than 30,000 likes, an usually high number for a post by the ministry.

Another post on March 29 pointed out that the number of civilian victims was increasing as Russian forces had ramped up missile strikes on urban areas, with a map of the country showing the areas under attack.

The move comes as a sense of crisis has developed at the ministry over the ever-increasing amount of disinformation on the internet.

Meta Platforms Inc., the operator of Facebook, removed a fake video posted on the service that showed Ukrainian President Volodymyr Zelenskyy calling on Ukrainians to surrender to Russia.

Another video posted on Twitter showing an apparent bombing on Mariupol, a southern Ukrainian city, before the invasion began Feb. 24, turned out to be a lightning strike and was deleted.

"Russia is trying to confuse Ukraine by making excuses designed to justify its military operations," a ministry official said. "Accurate information is becoming more and more important" as China may employ similar warfare tactics during a contingency involving Taiwan, the official said.

The newly created information specialist will be called senior coordinator for global strategic intelligence, a position within the Defense Intelligence Division of the ministry's Defense Policy Bureau.

The official will monitor and analyze operations that try to influence public opinion, putting the ministry on higher alert for potential operations from countries such as Russia and China.