Japan to expel Russian diplomats in concerted effort with allies

The Japanese government said Friday it will expel eight Russians including diplomats in a concerted effort with the United States and European countries, strongly condemning Moscow's killing of "many innocent civilians" in Ukraine.

Prime Minister Fumio Kishida said the decision was made "given the current situation in Ukraine," though he failed to elaborate on Japan's first expulsion of Russian diplomats over the Ukraine crisis.

Even as Russia is likely to take countermeasures such as sending Japanese diplomats there back home, Japan will "take all possible measures to protect activities of Japanese nationals and businesses in Russia," the premier said at a press conference. 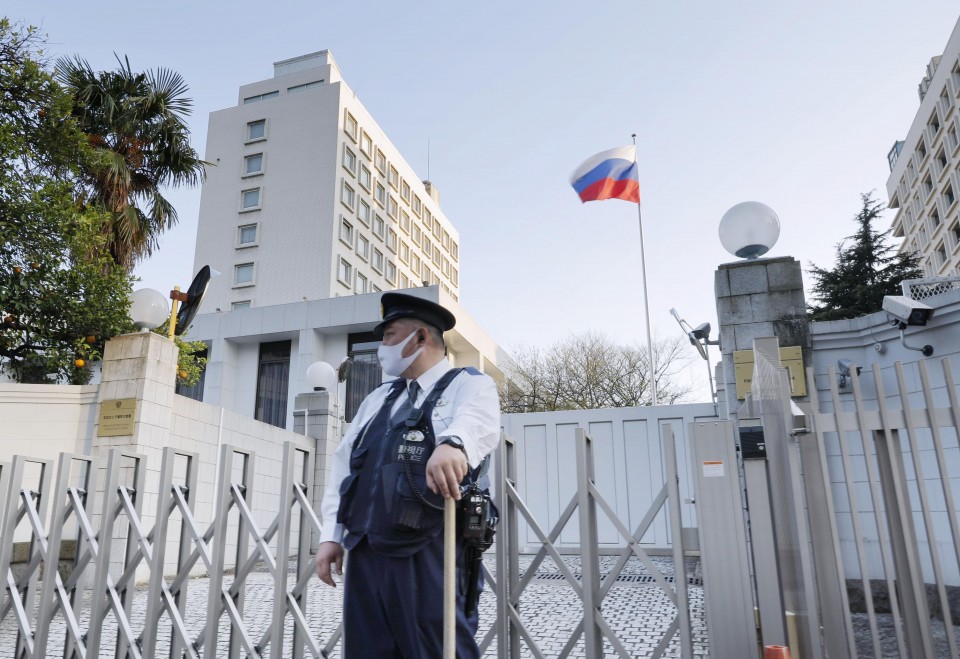 Japan's Vice Foreign Minister Takeo Mori summoned Russian Ambassador to Japan Mikhail Galuzin and told him about Tokyo's decision after he referred to recent reports of alleged atrocities of civilians in the suburbs of Kyiv, according to the Foreign Ministry.

"We are deeply shocked by many civilians killed by Russian forces in Ukraine," Mori was quoted by the ministry as saying. "The killing of many innocent civilians is a serious violation of international law and a war crime, which we condemn as absolutely unacceptable."

The eight Russians include diplomats at the Russian Embassy and personnel of Russia's trade representative, according to the ministry.

The decision follows a U.N. resolution on Thursday to suspend Russia from the Human Rights Council amid international condemnation over the brutal killings of civilians in Ukraine by Russian soldiers.

Western nations have recently announced the expulsions of hundreds of Russian diplomats on suspicion of involvement in spying and other activities.

The Japanese government declined to identify the eight and other details such as when they have to leave and whether Tokyo declared them persona non grata. A Japanese government official told reporters that Galuzin is not included in those to be expelled.

The last time Japan carried out an expulsion was in 2012 when the then Syrian ambassador was sent home in protest at violent actions against civilians by the regime of President Bashar al-Assad, the official said.