Prime Minister Fumio Kishida and a delegation sent by South Korean President-elect Yoon Suk Yeol agreed Tuesday on the need to improve bilateral ties that have sunk to the lowest level in years over wartime issues.

Kishida's meeting with the delegation signals his willingness to restore strained ties to a "healthy" state, though Tokyo has not wavered in its stance that Seoul should follow through on bilateral agreements aimed at settling thorny issues dating back to Japan's 1910-1945 colonial rule of the Korean Peninsula.

Hopes for a thaw in relations have grown as Yoon, who is calling for a "future-oriented" approach, is set to be sworn in on May 10. His delegation handed a letter from the conservative president-elect to Kishida during Tuesday's courtesy call. 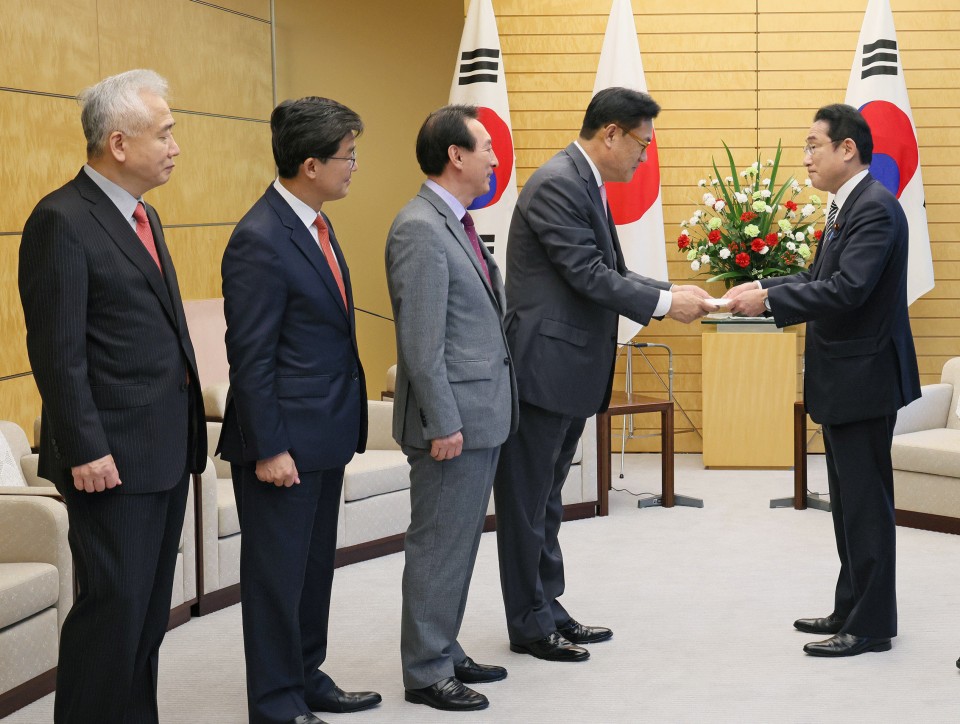 "Given that the rules-based international order is threatened, strategic cooperation between Japan and South Korea, as well as Japan, the United States and South Korea is needed more than ever," Kishida said, adding, "We have no time to spare in improving Japan-South Korea relations."

His remarks came as Russia's invasion of Ukraine continues, while Kishida and Yoon are also facing regional challenges including China's growing assertiveness and North Korea's nuclear and missile threats.

Kishida added, "We need to resolve issues lying between Japan and South Korea" including the wartime labor of Koreans, which has been a major sticking point.

The delegation led by Chung Jin Suk, deputy speaker of the National Assembly, said that bilateral relations are important and it hopes the sides work together in improving them.

The group, which is on a five-day trip to Japan through Thursday ahead of Yoon's inauguration on May 10, did not request Kishida's attendance at the inauguration ceremony, according to a Japanese government source.

In Seoul, incoming South Korean Foreign Minister Park Jin told reporters that the delegation is "discussing ways to resolve issues in a future-oriented manner based on a correct historic understanding."

Despite his wish to repair bilateral ties, Kishida also faces pressure from members of his conservative Liberal Democratic Party who remain cautious.

"It's important that states keep promises made between them," Kishida told a press conference, hours after his meeting with the delegation.

"We will communicate closely with the next president Yoon and his government based on our consistent stance, so our ties will return to a healthy state," Kishida said, adding that he will "carefully examine" the new administration's position.

The delegation met with Japanese Foreign Minister Yoshimasa Hayashi, and the defense and industry policy chiefs the previous day, during which they agreed to make efforts toward the improvement of bilateral ties.

Industry minister Koichi Hagiuda told a regular news conference that he told the delegation Monday "let's turn back the clock" to 2015 when the two countries struck an agreement to "finally and irreversibly" resolve the issue of "comfort women" procured for Japan's wartime military brothels.

The delegation also met with Chief Cabinet Secretary Hirokazu Matsuno on Tuesday and supported Matsuno's call for cooperation in resolving the issue of North Korea's abduction of Japanese nationals in the 1970s and 1980s.

During the administration of incumbent South Korean President Moon Jae In, bilateral ties have deteriorated over disputes stemming from Japanese colonial rule, namely the comfort women issue and compensation demands from South Koreans over what they claim was wartime forced labor.

In addition, the two sides have long been at odds over islets controlled by Seoul and claimed by Tokyo, known as Takeshima in Japan and Dokdo in South Korea, as well as over Japanese restrictions on semiconductor material exports to South Korea imposed in July 2019.

Tensions also grew on the defense front after an incident in December 2018 when the South Korean navy allegedly locked fire-control radar on a Japanese Self-Defense Forces patrol plane in Japan's exclusive economic zone.