President Vladimir Putin said Thursday that Russian forces have effectively seized control of the key port city of Mariupol as they launch a renewed offensive in eastern Ukraine, while calling off plans to storm a steel plant where thousands of people remained holed up.

U.S. President Joe Biden, however, told reporters Thursday there is no evidence yet that the Ukrainian city, which has been contested for weeks, has completely fallen. He also announced additional military assistance to Ukraine worth up to $800 million. 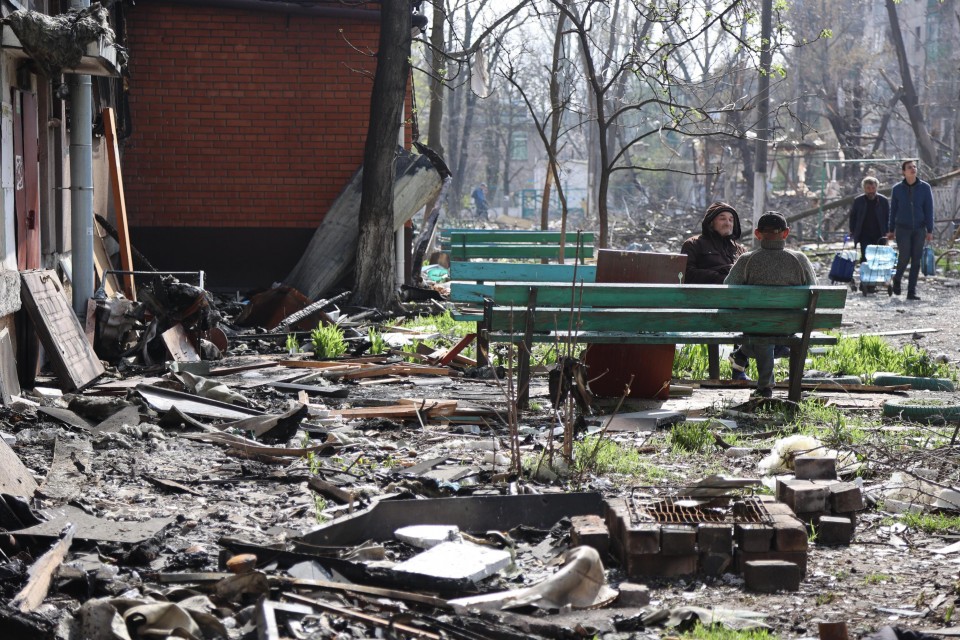 Residents sit on benches amid ruins in the Ukrainian city of Mariupol under the control of Russian military and pro-Russian separatists, on April 19, 2022. (Anadolu Agency/Getty/Kyodo)

In the latest move to further punish Russia for its aggression, Russian-affiliated ships will be banned from U.S. ports through a measure similar to one implemented by the European Union, Biden said.

While hailing Ukraine for successfully defending its capital city Kyiv from Russia, Biden said it is time to "accelerate" the provision of assistance by the United States and its allies to help prepare Ukraine for Russia's offensive, describing the impending military action as likely to be "more limited in terms of geography, but not in terms of brutality."

The capture of Mariupol would mark an important turning point in Russia's objective of seizing control of Ukraine's eastern region of Donbas, which contains pro-Russian separatists.

Mariupol is an area that links the Donbas region with Crimea, which was annexed from Ukraine by Russia in 2014.

Declaring the military operation in Mariupol a "success," Putin ordered his Defense Minister Sergei Shoigu to cancel plans to storm the Azovstal steel plant as it was "unnecessary," but demanded that the blockade continue.

Russia has called on the Azov battalion, a volunteer paramilitary militia, and others making their last stand at the steel plant to surrender.

In an effort to evacuate some 1,000 civilians estimated to be holed up at the plant, the Ukrainian government Wednesday proposed negotiations with Russia to be held inside Mariupol, stating it was prepared to go immediately and without conditions.

A response from Russia has yet to be confirmed, fanning fears that the humanitarian crisis may continue to worsen.

The United States also announced Thursday it intends to provide an additional $500 million in direct assistance to the Ukrainian government, bringing the total economic support for Kyiv to $1 billion in the past two months.

The funds are expected to help Ukraine stabilize its economy and support communities devastated by the war launched by Russia on Feb. 24, Biden said.