A set of proposals finalized by the ruling party last week, calling also for the development by the Self-Defense Forces of counterstrike abilities aimed at disabling enemy weapons, will serve as a basis for the government to update the National Security Strategy by the end of the year. 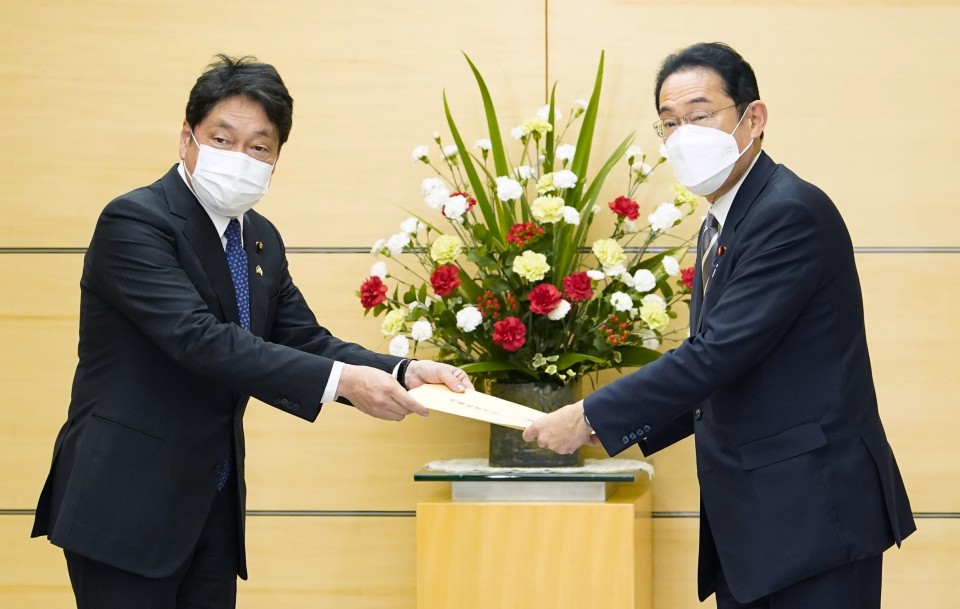 The LDP's push to allow Japan to fire upon and disable enemy missiles before launch from foreign territory and target command centers remains controversial given the country has long held an exclusively self-defense-oriented security policy position under its war-renouncing Constitution.

Kishida, also the LDP leader, said his party will need to discuss the policy review with its junior coalition partner Komeito, according to former Defense Minister Itsunori Onodera who heads the LDP's Research Commission on National Security responsible for compiling the proposals.

Komeito has shown reluctance in raising the defense spending target and Japan acquiring capabilities to attack enemy bases in counterstrikes. The two parties are not expected to undertake intensive discussions on how to amend Japan's security strategy before the upcoming House of Councillors election this summer.

The first revision of the long-term security guideline, which was originally approved by the Cabinet in late 2013, will come amid China's growing military assertiveness in the region, possibly emboldened by Russia's invasion of Ukraine, and North Korea's increasing missile and nuclear threat.

"Russia's invasion of Ukraine continues. In a situation that can be said to be the greatest (current) crisis for the international community, we must drastically strengthen Japan's defense capabilities," Defense Minister Nobuo Kishi said upon receiving the proposals earlier in the day.

With the defense spending target of more than 2 percent of GDP for North Atlantic Treaty Organization nations in mind, the ruling party has said Japan should aim to increase its spending to reach a level necessary to fundamentally reinforce defense capabilities in five years.

To meet the target, Japan, which has long capped its defense budget at around 1 percent of GDP, needs to secure almost 11 trillion yen ($86 billion) annually to be spent on national security, twice as much as a record 5.4 trillion yen set aside for the current fiscal year to March 2023 on an initial budget basis.

Some senior LDP lawmakers have, however, suggested that the 2 percent target should be treated as an "indicator," rather than an ultimate goal, with Toshimitsu Motegi, secretary general of the party, saying Tuesday that Japan should secure a defense budget of roughly 6.5 trillion yen for the next fiscal year.

In the recommendations submitted to the government, the LDP also called for the relaxation of restrictions on arms exports.

Regarding the proposal to obtain counterattack capabilities, the LDP moved away from using "enemy base strike capabilities" in its wording.

The switch from that expression was decided in response to public concern that Japan could be seen as departing from its defense-oriented security policy in pursuit of the ability to make a preemptive strike.

Komeito has also raised an issue about the originally used wording which it said could give the impression that the SDF would depart from the strictly defensive role.