A cross-party group of more than 100 Japanese lawmakers on Friday visited Yasukuni, a Shinto shrine in Tokyo regarded as a symbol of Japan's past militarism by its Asian neighbors, for its spring festival, but no Cabinet ministers were among them.

Hidehisa Otsuji of the ruling Liberal Democratic Party and head of the group told a press conference that they prayed for world peace, saying it is "on a precipice" amid Russia's invasion of Ukraine.

Otsuji said he is thankful Prime Minister Fumio Kishida sent a ritual offering to the shrine on Thursday, the starting day of the annual festival. 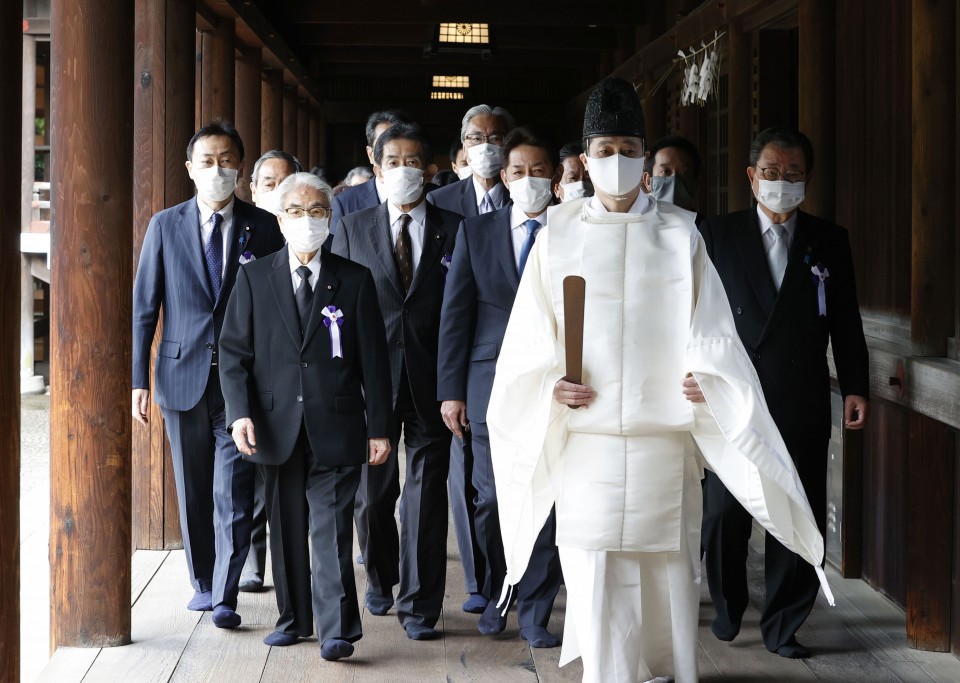 A cross-party group of lawmakers, led by its chief Hidehisa Otsuji (2nd from L), visits Tokyo's Yasukuni, a Shinto shrine seen by China and South Korea as a symbol of Japan's past militarism, on April 22, 2022. (Kyodo) ==Kyodo

Yasukuni has long been a source of diplomatic friction with China and South Korea as the shrine honors convicted war criminals along with millions of war dead, and Kishida did not make a visit during the festival period through Friday.

Among the 103 lawmakers who visited the shrine were the LDP's election strategy chief Toshiaki Endo and its Diet affairs chief Tsuyoshi Takagi, according to the group.

Other members were from the main opposition Constitutional Democratic Party of Japan, the Japan Innovation Party and independents.

The bipartisan group aims to make ongoing visits for the shrine's spring and autumn festivals and the anniversary of the end of World War II.

The group's members resumed visiting en masse in December for the first time in more than two years following a hiatus due to the coronavirus pandemic.

Normally, the shrine's spring and autumn festivals run for three days, but the latest event was again shortened to two days as part of efforts to prevent virus outbreaks.