U.S. reassures Taiwan of commitment amid Russian invasion of Ukraine

A U.S. delegation to Taiwan reiterated Wednesday Washington's commitment to peace and stability in the region during a meeting with President Tsai Ing-wen that came as Russia's invasion of Ukraine causes concern that China might seize the self-ruled island.

Mike Mullen, a former chairman of the U.S. Joint Chiefs of Staff and head of the bipartisan delegation sent by President Joe Biden, told Tsai at the presidential office that "maintaining peace and stability across the Taiwan Strait is not just a U.S. interest, but also a global one." 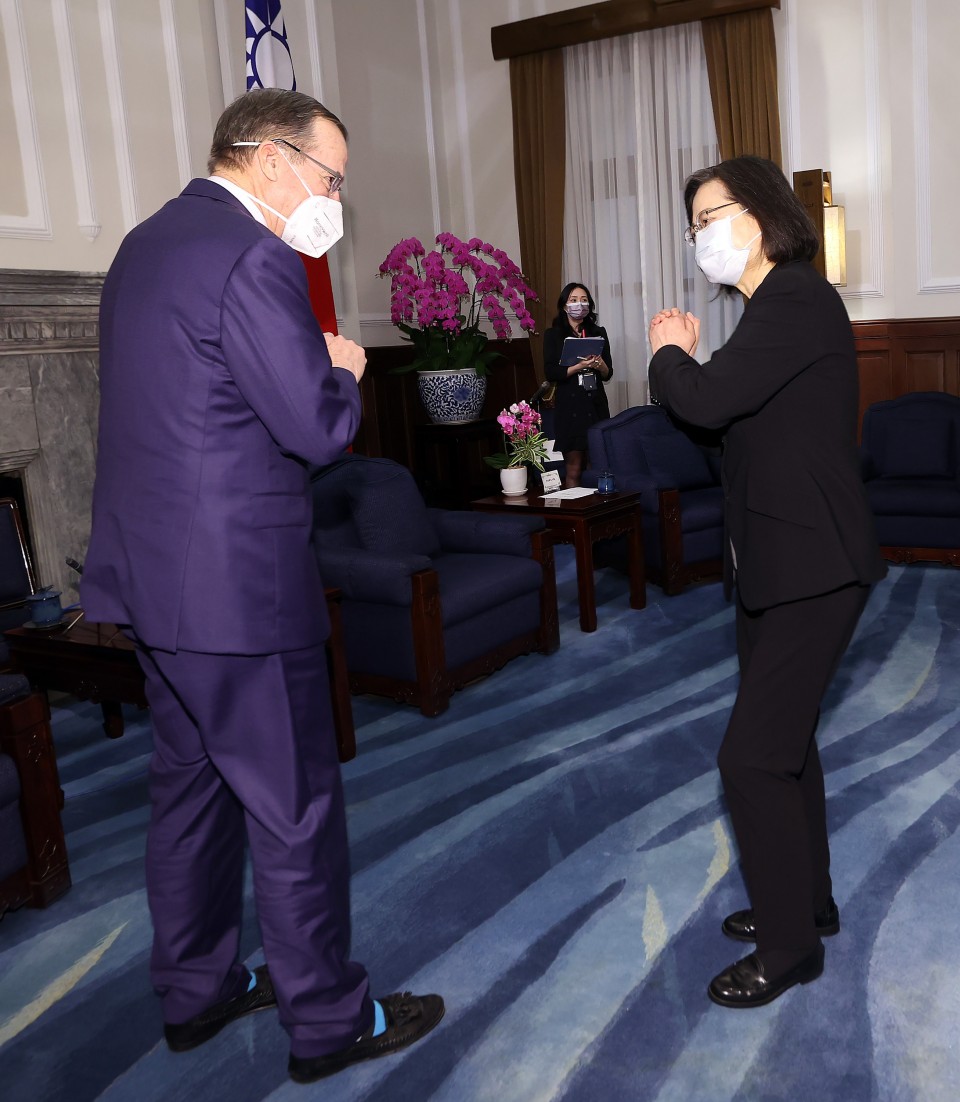 Taiwan President Tsai Ing-wen (R) greets Mike Mullen, former chairman of the U.S. Joint Chiefs of Staff and head of the bipartisan delegation sent by U.S. President Joe Biden, ahead of talks at the presidential office in Taipei on March 2, 2022. (Central News Agency/Kyodo)

"That is why the United States will continue to oppose any unilateral changes to the status quo and will continue to support a peaceful resolution of cross-strait issues consistent with the wishes and best interests of the people of Taiwan," he said.

Mullen expressed hope that the delegation's visit can reassure Taiwan and its people, as well as U.S. allies and partners in the region that Washington "stands firm behind its commitments."

Tsai welcomed the delegation's dispatch to Taiwan at a time when the international community is firmly focused on Ukraine, saying it demonstrates the importance the United States places on its "rock solid" partnership with Taiwan.

The president said that while China's military threat "continues to rise" and that what she called its efforts to erode Taiwan's democracy and divide its society "never cease," the Taiwanese people will never give up their convictions and will work even harder to make Taiwan a more resilient island of democracy.

China and Taiwan have been governed separately since they split in 1949 due to a civil war. Beijing regards the island as a renegade province to be reunified with the mainland by force if necessary.

The two-day visit from Tuesday has triggered a strong reaction from Beijing, with Chinese Foreign Ministry spokesman Wang Wenbin urging the United States to adhere to the "one China" principle and stop any form of official contact with Taiwan.

Wang reiterated Wednesday that the Chinese people's resolve to defend the country's sovereignty and territorial integrity is unwavering.

"No matter who the United States sends to show so-called support for Taiwan, their efforts will be futile," he said.

Separate from the delegation, former U.S. Secretary of State Mike Pompeo is also scheduled to visit Taiwan this week, where he will hold talks with Tsai and other officials.