The move came a day after the EU said the 27-nation bloc agreed to exclude seven Russian banks from a key international payment network known as SWIFT to disrupt Russian trade and money transfers. Tokyo had already decided to freeze any assets held by the three other banks.

By freezing assets of banks subject to EU sanctions, Japan will cooperate with other countries in blocking Russia from the Society for Worldwide Interbank Financial Telecommunication. Kishida said assets of Russian oligarchs held in Japan would also be frozen. 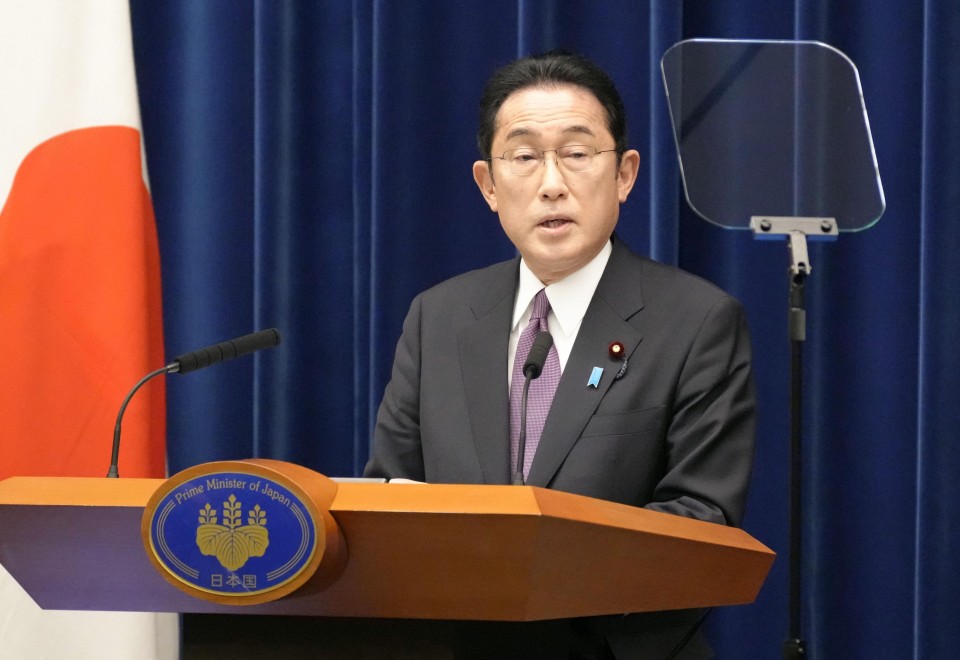 Japanese Prime Minister Fumio Kishida speaks during a press conference at the premier's office in Tokyo on March 3, 2022. (Kyodo)

In a press conference, Kishida condemned Russia's nuclear threats as "outrageous" after President Vladimir Putin said he was putting his country's nuclear forces on high alert.

"As the only nation to have suffered atomic bombings in war, and as a prime minister elected from the atomic-bombed Hiroshima, I have insisted in summit diplomacy and international meetings that intimidation by, or let alone a use of nuclear weapons will never be tolerated," he said.

Asked about the possibility of imposing more sanctions, such as restricting Russian aircraft from using Japanese airspace, Kishida said the government will continue to examine the situation and "take appropriate measures" in cooperation with the Group of Seven nations and other countries.

Japan's restrictions will be implemented on April 2, according to the Finance Ministry.

The four banks are Russia's second-largest bank VTB Bank, Bank Otkritie, Sovcombank and Novikombank. The banks have close ties with the Russian government, according to the ministry.

Other than the banks, the government on Thursday imposed an asset freeze against 18 more Russian individuals, seven Belarusian top officials including President Aleksandr Lukashenko and Defense Minister Viktor Khrenin, and two organizations in the country, which has served as an entry point for Moscow's forces invading Ukraine.

The government also said it will impose stricter export control measures for Belarus.

The United States and the EU said last weekend a select number of Russian banks will be removed from the Belgium-headquartered SWIFT, with Kishida later pledging that Japan will join the punitive effort.

The EU said Wednesday the seven banks will be excluded from SWIFT on March 12.

SWIFT connects more than 11,000 banks, other financial institutions and corporations in more than 200 countries and territories, according to its website.