A year has passed since a 33-year-old Sri Lankan woman died while in custody at a Japanese immigration center, and details of how officers disregarded her last gasps have come to light thanks to efforts by her bereaved family and their supporters.

To uncover the real truth behind the tragic death of Ratnayake Liyanage Wishma Sandamali on March 6, 2021, her family sued the Japanese government earlier this month, with the preparatory steps already leading to the disclosure of a portion of a video recorded via monitoring cameras. 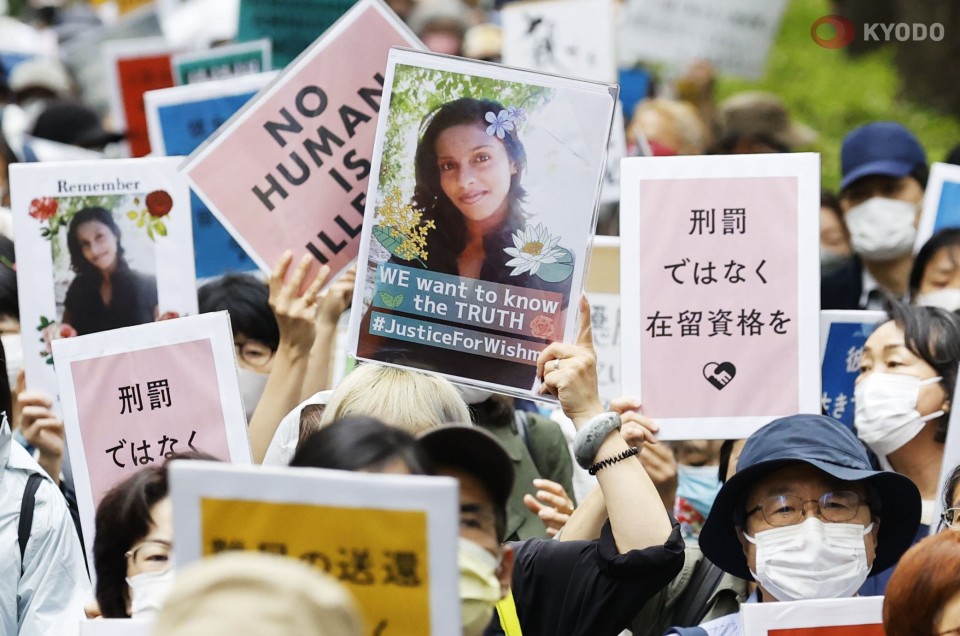 People opposing an immigration law revision to fully enforce deportation march in Tokyo on May 16, 2021, holding up pictures of Ratnayake Liyanage Wishma Sandamali along with their messages. (Kyodo)

The family, its lawyers and activists addressing the country's immigration issues are calling for a fundamental reform to the system of detaining all overstayers until deportation, as 17 detainees including Wishma have now died since 2007.

The Immigration Services Agency of Japan, meanwhile, has admitted inadequacies in the medical services it offers and is trying to improve the situation by increasing the number of part-time doctors it employs, among other changes. 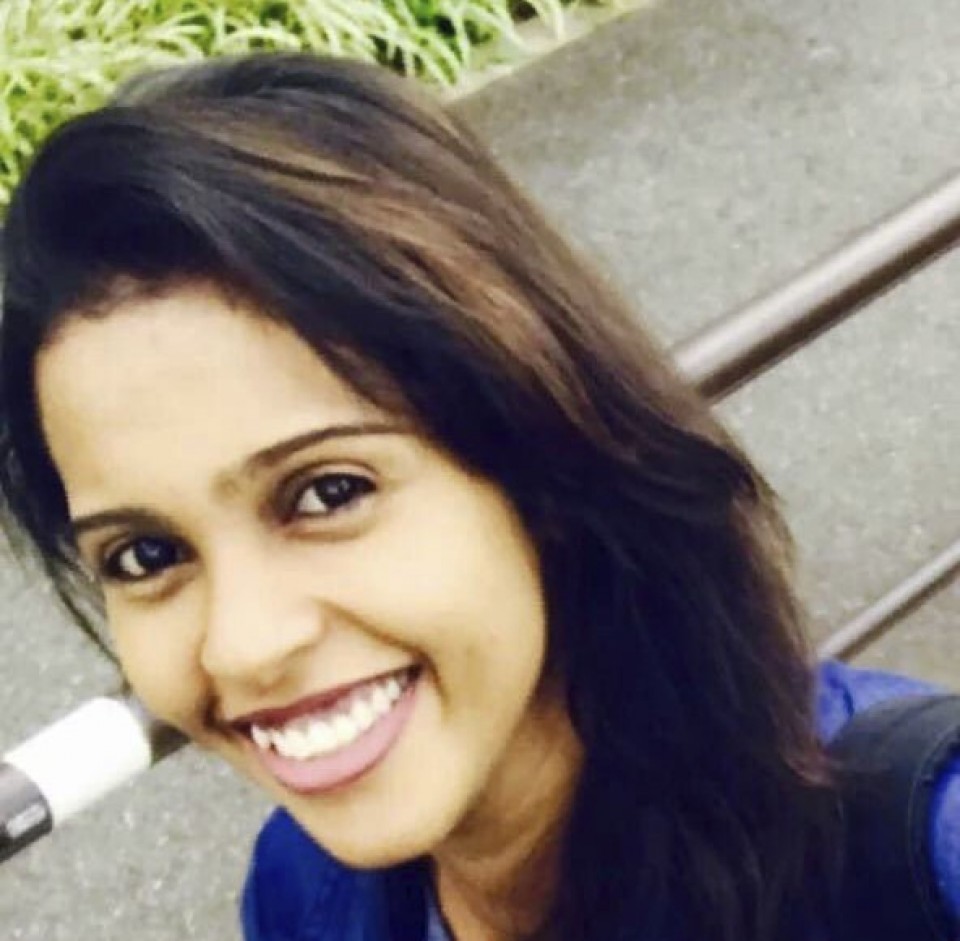 Wishma, who came to Japan in 2017 with the dream of working as an English teacher, was detained in August 2020 at the Nagoya Regional Immigration Services Bureau after she overstayed her visa.

Even though she complained she suffered domestic violence at the hands of the Sri Lankan man she lived with, the bureau in central Japan offered her no protection as an abuse victim, according to a report on her death the immigration agency released in August last year.

In mid-January 2021, her condition began to worsen and she was unable to take on enough food due to continued sickness. A part-time doctor at the bureau initially prescribed a painkiller and later a drug for an inflammation of the esophagus.

On Feb. 3, a supporter of Wishma saw her in a wheelchair, unable to walk, and requested the immigration bureau to temporarily release her.

She underwent a stomach camera test at an external hospital two days later, but no abnormalities were found.

On Feb. 15, a urine test showed she was suffering from dehydration and malnutrition, and another part-time doctor who saw her the next day suggested that she visit a psychiatrist because no organic problems were found, the report shows.

The bureau, however, did not allow her a provisional release or allow her to be hospitalized, suspecting that Wishma was faking an illness.

Bureau authorities determined instead that they needed to make her "understand her position by disallowing her provisional release" and they hoped to persuade her to return to Sri Lanka, the report says.

The immigration agency, whose regional bureaus sometimes record detainees to check on their behavior, initially refused to release the relevant footage, which totaled 295 hours of recordings.

But it did unveil about six and a half hours behind doors to lawmakers on the Committee on Judicial Affairs of both chambers of the Diet, after showing a little over an hour in August to Wishma's sisters on humanitarian grounds. The family and its lawyers saw some four hours in total through the court procedures. 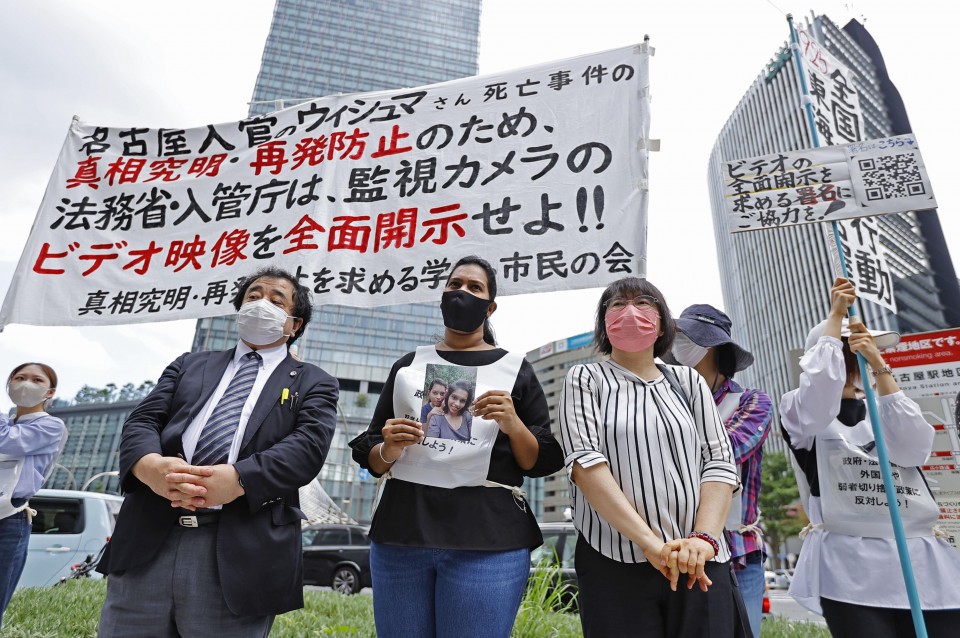 "Sir, blood from my mouth, blood from my nose. I'm dying," Wishma groaned loudly through the intercom on Feb. 24, in what opposition lawmaker Takeshi Shina described as "a voice like death rattle" after watching the scene in a meeting of the House of Representatives panel.

Shina of the Constitutional Democratic Party of Japan said, "Even so, the officer told her 'Be patient' and left her untreated. After that, Wishma-san seemed to have believed that nothing would be done no matter what she said and I got an impression that there was no longer a scene of her speaking her own intention." 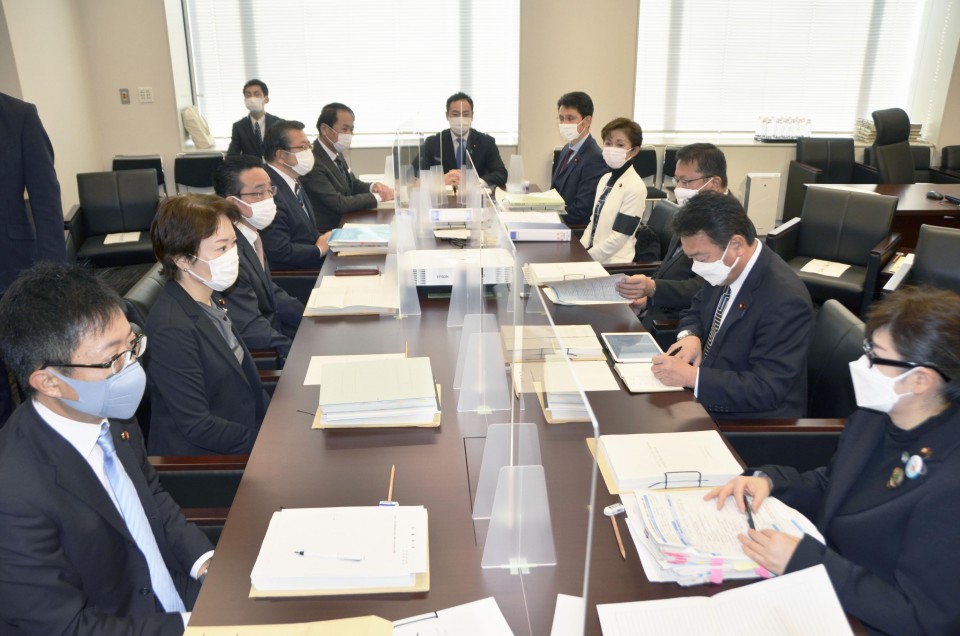 Members of the House of Representatives Committee on Judicial Affairs attend a meeting to watch video footage of Wishma Sandamali on Dec. 24, 2021, at the parliament in Tokyo. (Kyodo)

In the early morning of Feb. 26, Wishma fell out of bed and was unable to get back up on her own.

Two officers came to her cell but failed to help her and left, saying "Don't speak loudly, everyone's sleeping. Sorry," thus leaving her on the floor for three hours, according to House of Councillors member Taku Yamazoe.

"The officers were dealing ordinarily with a person in serious condition and showed no signs of a sense of crisis," said Yamazoe of the Japanese Communist Party.

When Wishma choked on her cafe au lait during dinner on March 1, one officer laughed at her saying "milk is coming out of your nose."

On March 2, two officers repeatedly complained, "She's heavy" as they helped her to her bed.

On March 3, Wishma told a visiting member of START, a support organization for foreign workers and refugees, "My head feels numb. It's like a train is running in my ear. My limbs don't work properly. I can't even drink water."

The START member told the immigration bureau, "She's going to die if this goes on," and requested that she be hospitalized immediately. 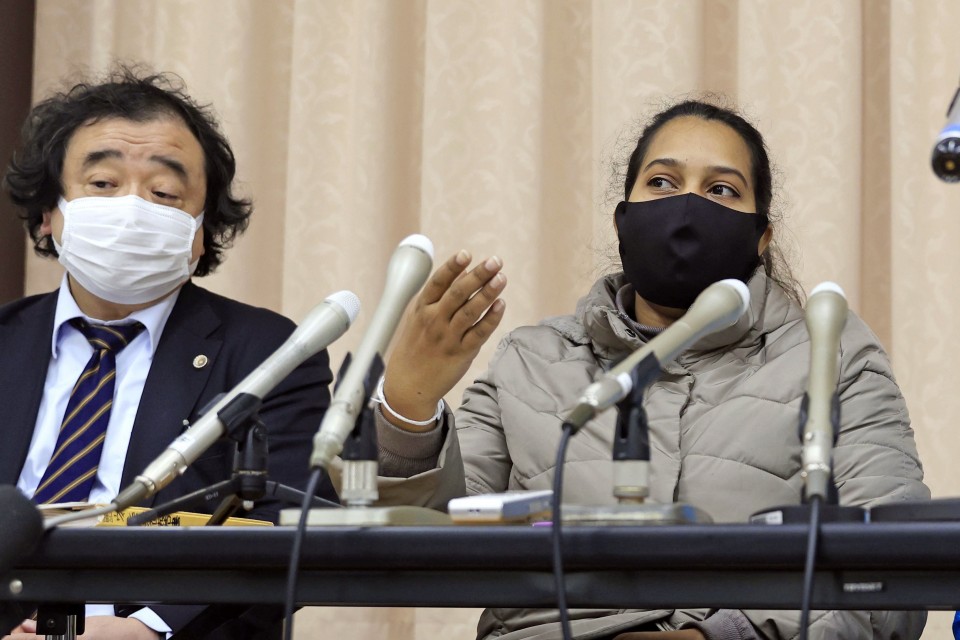 Wishma Sandamali's younger sister Poornima (R) speaks to reporters after watching video footage of her sister in detention on Dec. 24, 2021, in Nagoya, central Japan. Seen on her left is lawyer Shoichi Ibusuki. (Kyodo)

At a meal, she vomited each time an officer brought a spoon to her mouth to help her eat porridge, but the officer kept feeding her, said lawyer Komai. "It was very cruel that they continued to make her eat even when it was difficult for her to eat," she said angrily.

Wishma underwent a head CT examination at the psychiatry department of an external hospital on March 4, and no abnormality was detected.

The doctor diagnosed, "It is possible that somatization of a malingering disorder (or the so-called hysteria) happened out of the motive that she wanted to be provisionally released by falling sick."

The doctor told an accompanying immigration officer that she was unlikely to recover until provisionally released and wrote in her report, "It can be expected that she will get better if released provisionally. That may be the best for the patient's sake, but what shall I do?" 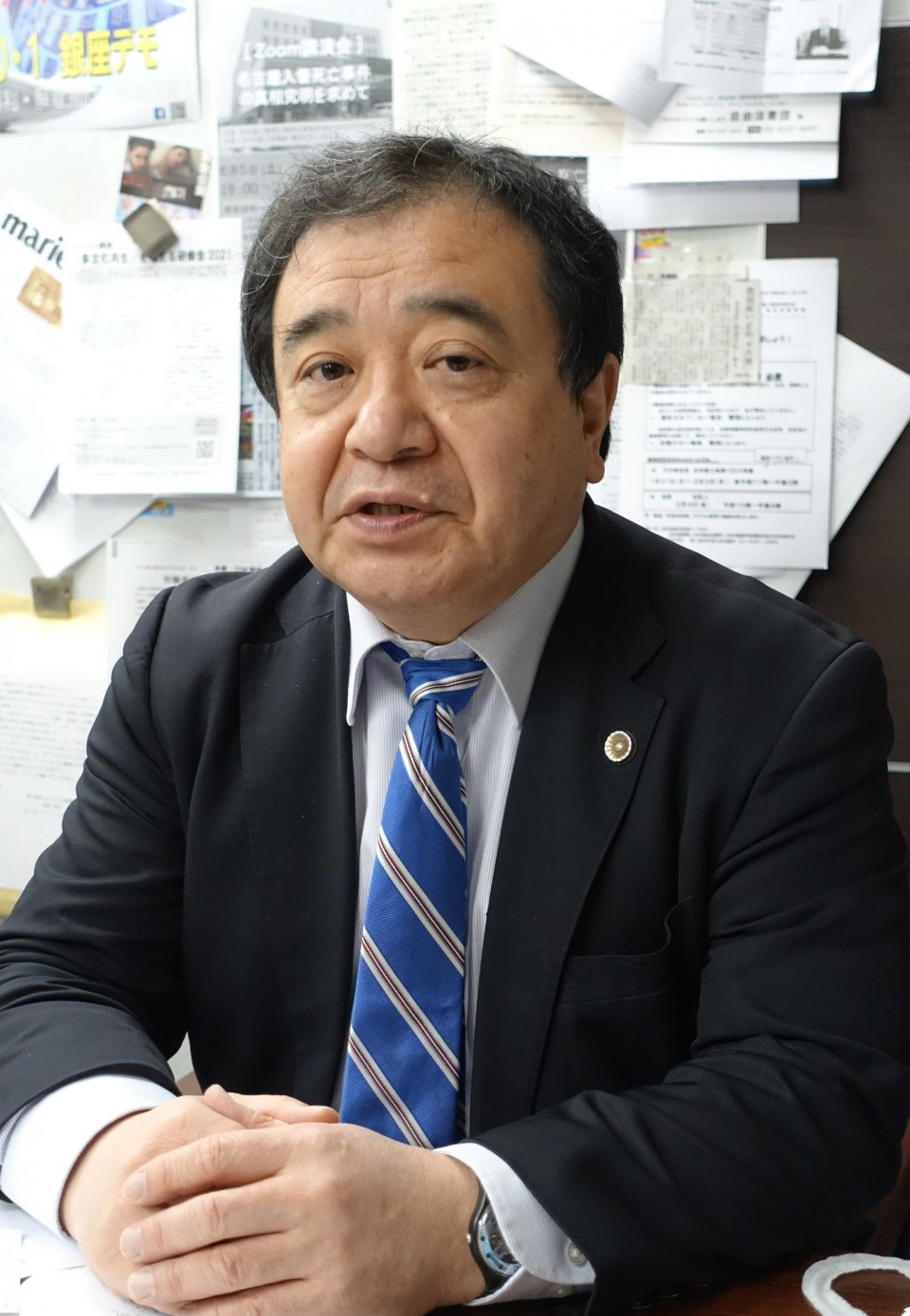 On the morning of March 5, Wishma's blood pressure and pulse were unmeasurable. She managed a high-pitched cry, but gave no further response when an officer waved at her, according to lawyer Shoichi Ibusuki who also represents the family.

"Why didn't they call an ambulance in that situation? It was the last chance," he said.

In the afternoon, a nurse helped Wishma with some rehabilitation exercises but "She was in pain and screaming. The nurse said, 'It's okay.' It was a picture of hell," Komai said.

The immigration bureau had decided by then to temporarily release her once her condition improved to some extent, and indicated its stance to Wishma the same day.

On March 6, however, Wishma gave no reaction no matter how many times officers spoke to her, said upper house lawmaker Yoshifu Arita.

She occasionally moved her head until 1:23 p.m. but had no pulse when an officer entered her cell at 2:07 p.m., and was taken by ambulance to a hospital where she was pronounced dead.

Her weight of 63.4 kilograms was about 21 kg less than it had been about half-year earlier when she was detained.

"Her life was lost as a result of medical abandonment and caregiver abuse. It was nothing short of a slow murder," said Arita of the main opposition Constitutional Democratic Party of Japan. 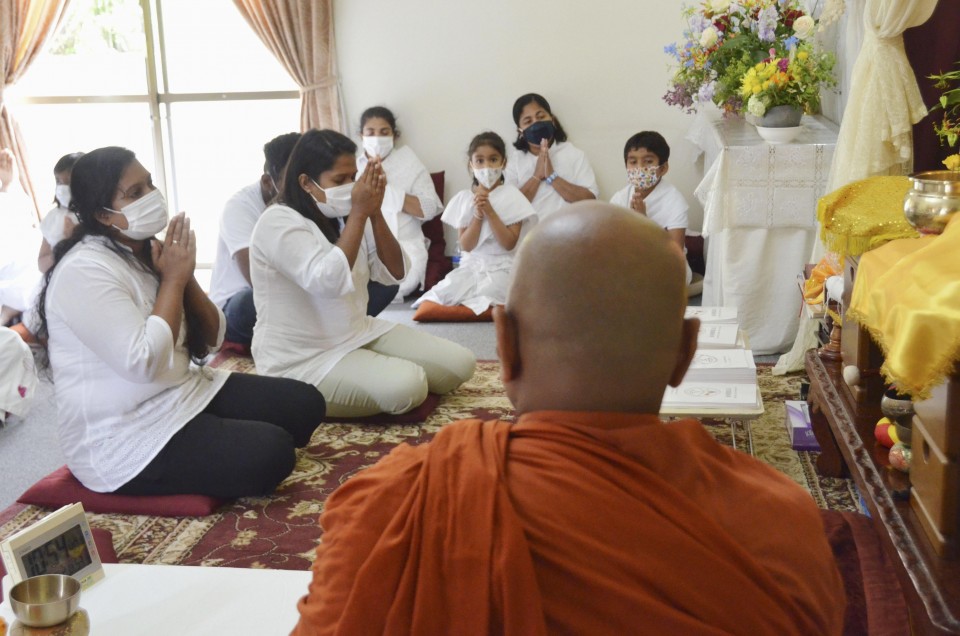 Wishma Sandamali's younger sisters (from L) Poornima and Wayomi put their palms together in prayer during her memorial service at a Sri Lankan Buddhist temple in Fujinomiya, Shizuoka Prefecture in central Japan on May 23, 2021. (Kyodo)

Poornima, who has been in Japan since May to learn the truth about Wishma's death, said, "It's been a year since my sister passed away but I still don't know the truth. I don't want this kind of sad thing to be repeated again."

Lawyer Ibusuki said, "She should have been hospitalized immediately as a urine test on Feb. 15 showed a state of starvation and she was already unable to move by herself on Feb. 22."

"Immigration authorities must have entrenched with the idea that Wishma-san was pretending to be sick. It was torture to inflict mental and physical distress by continuing her detention and pressure her to return home," he said. 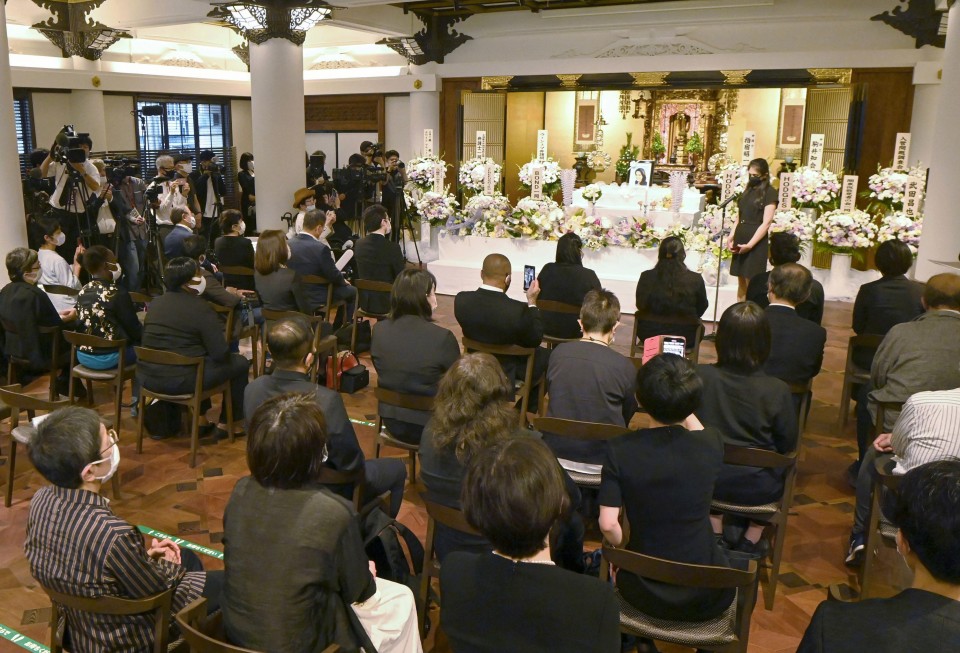 A gathering in memory of Wishma Sandamali is held in Tokyo's Tsukiji Hongwanji temple on May 29, 2021. (Kyodo)

To prevent any further tragedies, lawyer Ibusuki proposes that Japan revises its detention policy that currently covers all irregular stayers into one that is limited to those who may run away.

He is also calling for a court to be involved in whether detention should be upheld as in the case of arrest and detention in criminal cases, and an upper limit to the detention period such as six months.

The Immigration Services Agency admitted in a report in August officers had lacked risk awareness and there was insufficient medical care, but concluded it difficult to specify the cause of Wishma's death and still believed there was a good reason for disallowing her provisional release.

By taking no legal disciplinary action on the officers involved the agency shows "that it is taking the matter as a problem that can be dealt with by just a light admonishment even though it seems to be apologetic," Ibusuki said.

Japan will not seek immigration law amendment before summer election