Leaders from Japan, the United States, Australia and India agreed during their virtual meeting Thursday that they oppose any unilateral use of force to change the status quo in their region, the Japanese government said, as Russia's invasion of Ukraine brings renewed concerns over China's assertiveness in the Indo-Pacific.

The four major Indo-Pacific democracies also agreed to launch a new humanitarian assistance and disaster relief mechanism which will "provide a channel for communication" as they each address and respond to the crisis in Ukraine, according to a joint statement. 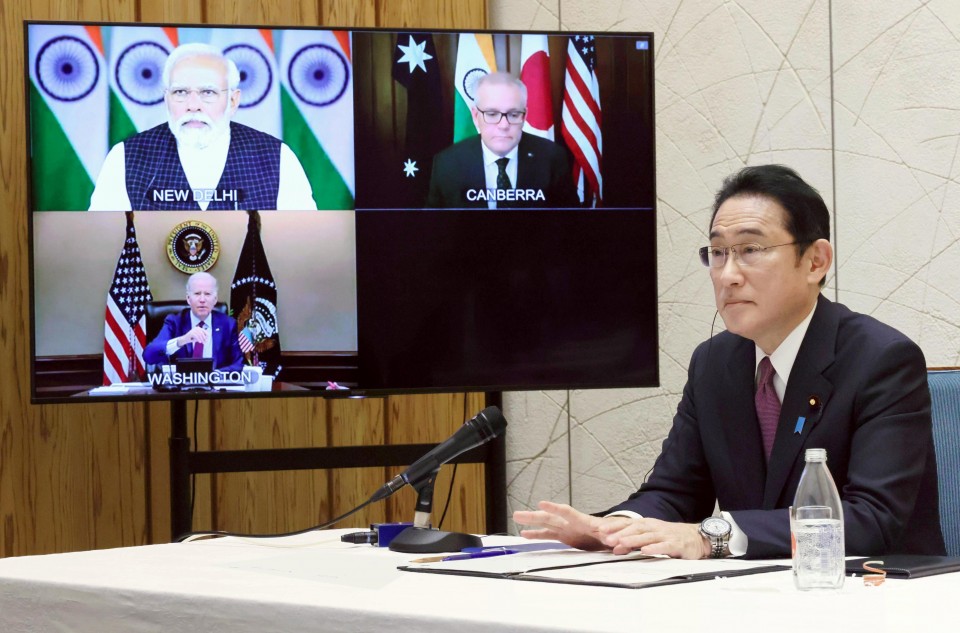 Japanese Prime Minister Fumio Kishida attends a videoconference at his office in Tokyo with his Australian, Indian and U.S. counterparts on March 3, 2022. (Photo courtesy of the Cabinet Public Affairs Office)(Kyodo)

"We agreed that we should not allow any unilateral change to the status quo by force in the Indo-Pacific region like the latest case (in Ukraine) and we need to step up efforts to promote a free and open Indo-Pacific in times like this," he told reporters at his office.

The four countries of the Quad group have been deepening their ties and cooperation in the Indo-Pacific region, where China is boosting its military and economic clout. Japan is planning to host a Quad summit in the first half of this year.

Among the Quad members, India's response to Russia's aggression against Ukraine has been in focus, given its traditionally close ties with Moscow.

India abstained from voting on a nonbinding resolution at the U.N. General Assembly condemning the invasion by Russia and demanding its troops withdraw immediately from Ukraine.

The joint statement did not explicitly criticize Russia for the invasion, over which Moscow has faced sharp condemnation and economic sanctions from countries including the United States, Japan and Australia.

"The Quad leaders discussed the ongoing conflict and humanitarian crisis in Ukraine and assessed its broader implications," the document said.

But in their commitment to a "free and open Indo-Pacific," they emphasized it means that "the sovereignty and territorial integrity of all states is respected" and "countries are free from military, economic, and political coercion."

Before the Quad meeting, Kishida said the Indo-Pacific region, especially East Asia, should not allow any unilateral attempt to alter the status quo by force.

Chinese ships have been repeatedly spotted in waters near the Senkaku Islands in the East China Sea, a group of uninhabited islets controlled by Japan and claimed by China.

China-Taiwan tensions remain high as Beijing considers the island as a renegade province to be reunified with the mainland by force if necessary.