The Japanese government on Monday issued a warning over tight energy supply, urging people in Tokyo and some other areas to save electricity as a large earthquake last week in the northeastern region caused some power plants to halt.

The Ministry of Economy, Trade and Industry's warning came after Tokyo Electric Power Company Holdings Inc. said earlier in the day a power shortage is possible Tuesday due to cold weather and suspension of some thermal power plants from the quake last Wednesday. 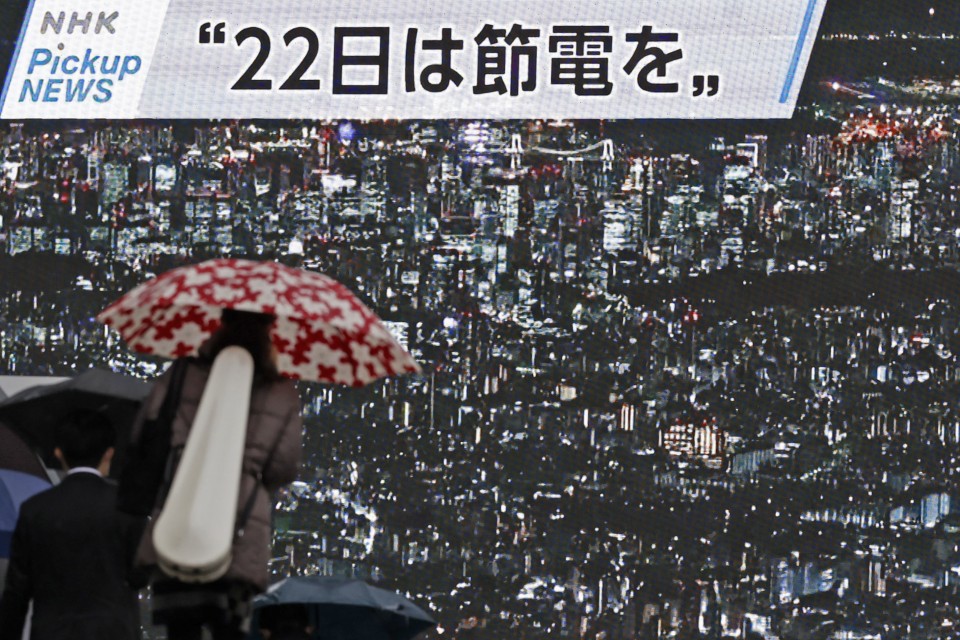 A screen on a street in Tokyo's Akihabara area shows on March 22, 2022, news that the Japanese government issued a warning over tight energy supply the previous day, asking people in Tokyo and some other areas under the jurisdiction of Tokyo Electric Power Company Holdings Inc. to save electricity. The utility expects a power shortage on March 22 due to cold weather and the suspension of some power plants due to the powerful earthquake that hit northeastern Japan on March 16. (Kyodo) ==Kyodo

According to the company, supply from its solar plants will likely be limited due to weather, even though demand for heating will likely increase. It expects the power consumption rate to stand at 97 percent between 6 a.m. and 7 a.m. on Tuesday.

The ministry indicated it could be the most severe electricity shortage since 2011, when TEPCO conducted a planned power outage amid the electricity crunch following a powerful earthquake and tsunami and the nuclear meltdown at its Fukushima Daiichi nuclear power plant in March that year.

TEPCO, which supplies power to Tokyo and eight other prefectures including nearby Kanagawa, Chiba and Saitama, said it expects to receive up to 2.37 million kilowatts of electricity from other utility firms.

TEPCO is asking households and companies to turn off unnecessary lights and set their heating at 20 C to save electricity.

The ministry said power saving will likely be needed between 8 a.m. and 11 p.m. on Tuesday for areas covered by the company.