Japan's lower house on Tuesday adopted a resolution condemning Russia's invasion of Ukraine in "the strongest possible terms," urging Russian troops to immediately stop the attack and withdraw from the Eastern European nation.

The resolution, approved by the House of Representatives, expressed opposition to Russia's use of force to unilaterally change the status quo after the aggression sparked an international outcry and led the United States and its allies, including Japan, to impose tough economic sanctions on Russia.

The Russian invasion goes against international law and the United Nations Charter prohibiting the use of force, the document said, adding, "It clearly infringes upon the sovereignty and territorial integrity of Ukraine." 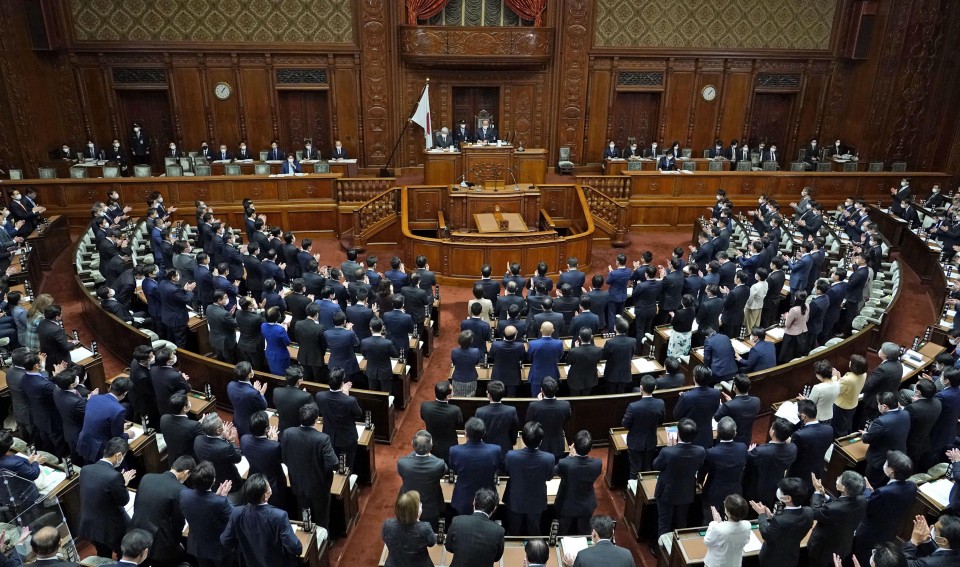 Japan's House of Representatives adopts a resolution condemning Russia's invasion of Ukraine during a plenary session in Tokyo on March 1, 2022. (Kyodo)

"It is an extremely grave situation that could shake the foundation of order, not only in Europe but also in the broader international community, including Asia," the document said.

The resolution is the second of its kind regarding the current Ukrainian crisis. The House of Councillors, or the upper house, is expected to endorse its own resolution, possibly on Wednesday.

The lower house resolution again expressed solidarity with the people of Ukraine, following a previous document adopted in February, urging the Japanese government to swiftly and firmly respond to the crisis by using sanctions or other means so that peace could be restored to Ukraine.

"We will work with the international community and respond appropriately by implementing powerful sanctions and other measures promptly," Foreign Minister Yoshimasa Hayashi said after the passage of the resolution.

The previous resolution on Feb. 8, prior to Russia's launch of its military attack, did not mention the deployment of Russian forces as the cause of heightened tensions near Ukraine's borders, saying only that the situation was destabilized by foreign forces.