With No. 7 maegashira Takayasu having fallen to sekiwake Abi (8-7), Wakatakakage had a chance to wrap up the Emperor's Cup with a win over ozeki Shodai in the last scheduled bout of the 15-day tournament at Edion Arena Osaka.

But Shodai (9-6), who started the meet as a demotion-threatened "kadoban" ozeki, had other ideas, forcing out Wakatakakage a day after defeating Takayasu, leaving the leaders tied at 12-3.

With both men fighting for a maiden championship, Wakatakakage earned a last-gasp victory in a thrilling playoff bout. 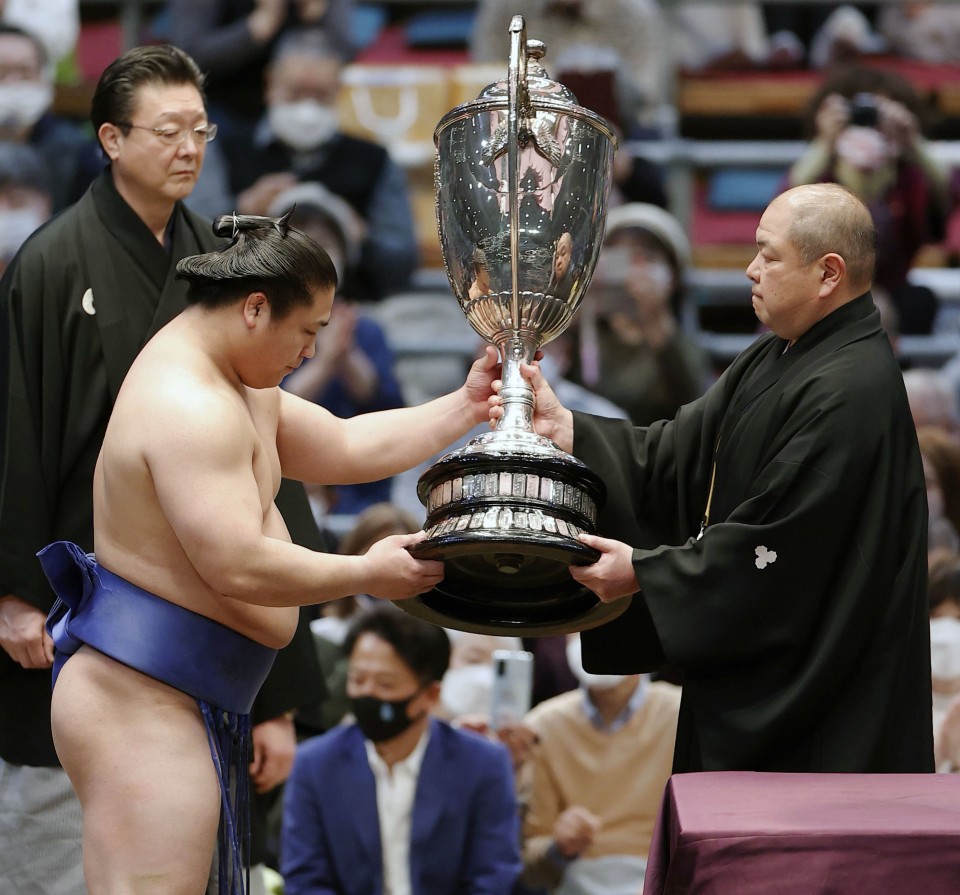 After sidestepping Takayasu's initial charge, Wakatakakage ceded the momentum to his opponent, who gave pursuit around the ring as the sekiwake backpedaled.

Having driven Wakatakakage back to the edge, Takayasu went in for the kill, but the sekiwake dodged his final shove and executed a pulling overarm throw with both feet just inside the straw.

The playoff victory made Wakatakakage the first newly promoted sekiwake to win a grand tournament in 86 years.

"I don't really have a sense of having won the championship yet," said Wakatakakage, who remembered only snippets of the playoff.

"I just remember that I kept myself there, that I was at the edge but stayed inside."

"My family came to see me, so I wanted to show them something good."

In his bout against Shodai, Wakatakakage delivered a strong opening hit and secured an inside grip, but after he unsuccessfully attempted a throw, the ozeki was able to knock the new sekiwake off balance and drive him out. 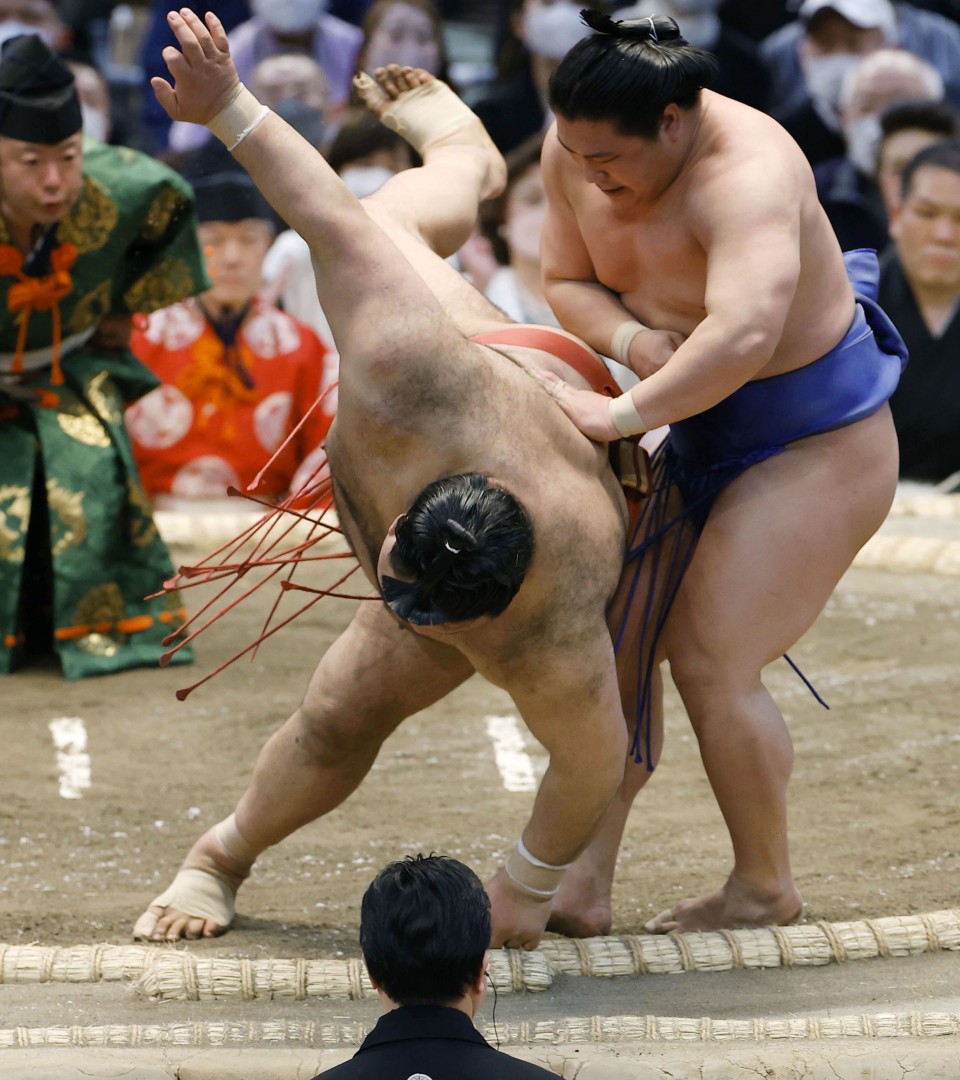 Wakatakakage (R) defeats Takayasu in a championship playoff on the final day of the Spring Grand Sumo Tournament at Edion Arena Osaka on March 27, 2022. (Kyodo) ==Kyodo

Fighting to avoid an eighth loss and keep his spot at sumo's third-highest rank after his recent promotion, Abi (8-7) flew out of the blocks and forced Takayasu into a retreat with his favored thrusting attack.

As the maegashira tried to find his footing, Abi spun him around and pushed him over the edge from behind.

For Takayasu, the result marked another disappointing ending to an otherwise strong March tournament. He was in contention for his first top-division crown a year ago before losing four of his last five bouts.

This time around, he held the outright lead entering the penultimate day until Saturday's loss to Shodai allowed Wakatakakage to move into a tie for first by beating ozeki Takakeisho.

Ozeki Mitakeumi (11-4) capped off a solid debut at sumo's second-highest rank by outmuscling Takakeisho (8-7), who lost four straight after avoiding demotion with his eighth win on Day 11.

After containing Takakeisho's normally powerful opening charge, Mitakeumi slung him to the sandy surface with a pulling overarm throw. 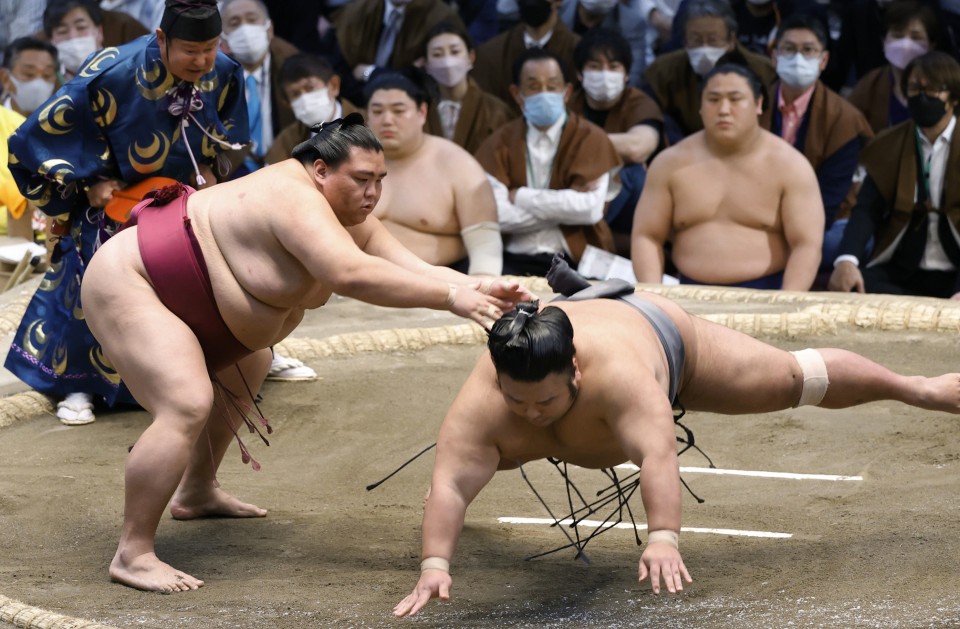 Taking place in front of spectators in Osaka for the first time since the start of the coronavirus pandemic, the tournament was guaranteed a maiden title winner on the final day.

The other wrestler who started the day in contention, No. 6 Kotonowaka, finished at 11-4 following a loss to another rising star, newly promoted komosubi Hoshoryu (8-7), the 22-year-old nephew of Mongolian great Asashoryu.

Needing a win to keep his place among the three elite "sanyaku" ranks below yokozuna, Hoshoryu broke Kotonowaka's grip before sending him to the clay with a pulling underarm throw.

"I don't really remember what I did (in the bout) but I'm just glad I won," Hoshoryu said. "There were more negatives than positives this meet, so I know I have a lot of things to work on."

Kotonowaka earned his third Fighting Spirit Prize at the tournament, which was thrown wide open by the Day 6 injury withdrawal of sole yokozuna Terunofuji, winner of two of the past three championships.

Former sekiwake Daieisho likely booked his return to the sanyaku ranks by pushing out No. 10 Aoiyama.

The No. 1 maegashira clinched a winning record at 8-7 by quickly overpowering Bulgarian-born Aoiyama, who finished one win short of the all-important eight-win benchmark at 7-8.