Ferdinand Marcos Jr. is leading in the May 9 Philippine presidential election campaign, supported by voters under the mid-50s who were not mature enough to understand the 1986 pro-democracy "people power" revolution that overthrew his father's authoritarian regime.

Public records show the Marcos administration from 1965 to 1986 embezzled as much as $10 billion and committed thousands of rights abuses including torture and killings. 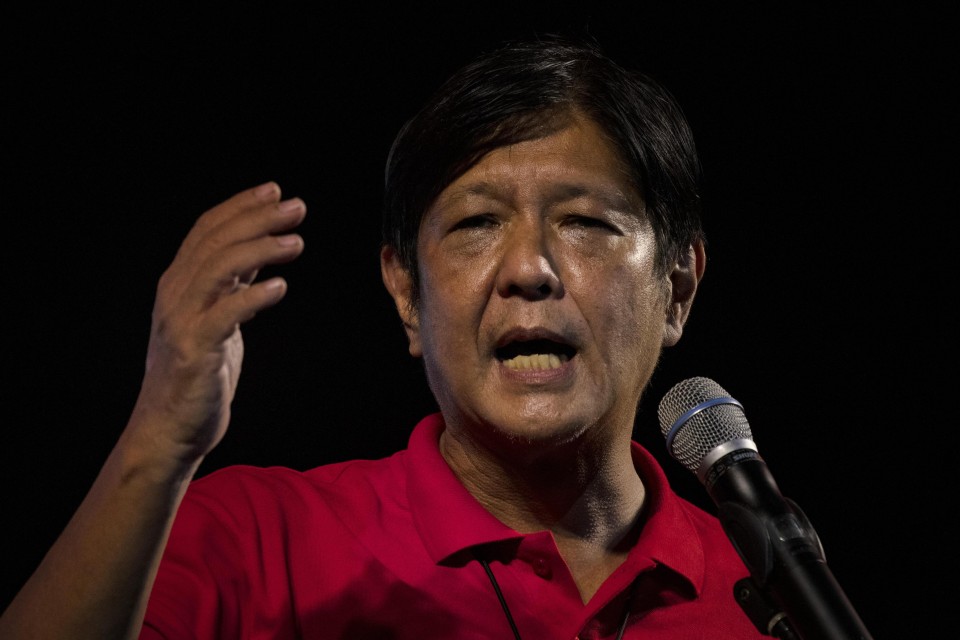 Ferdinand Marcos Jr. speaks during a rally as he campaigns for the presidency on Feb. 19, 2022, in Caloocan, Metro Manila, in the Philippines. (Getty/Kyodo)

But experts say propagandists of Marcos Jr. are using social media to sanitize history, leading to the present generation's "renewed appreciation" of the senior Marcos and support for his son in alliance with Sara Duterte-Carpio, the daughter of President Rodrigo Duterte who is limited to a single six-year term under the Constitution.

Victims of the Marcos administration's atrocities during its martial law era are unhappy about the popularity of Marcos' son and namesake, as well as the lower support for opposition candidate and Vice President Leni Robredo, a human rights lawyer and a vocal critic of Duterte who led war on drugs in which thousands of innocent people were reportedly killed.

The victims voice concerns that Marcos Jr., 64, may follow in his father's footsteps and stifle dissent if elected as the successor to Duterte, a Marcos fan.

Filipinos aged 18 to 41 make up 56 percent of the 65.7 million voters, the "prime movers" of this election, the Commission on Elections said. In the latest Pulse Asia survey in January, Marcos Jr. had the highest lead over Robredo at 53 points among 18- to 24-year-olds including first-time voters.

Marcos Jr.'s lead is lowest at 23 points among senior citizens, aged 65 and up, the survey showed.

A supporter of Marcos Jr., Ann Nunez, was not born yet when the senior Marcos introduced martial law to the Philippines in 1972 under the pretense of suppressing insurgency.

"But I have watched different documentaries about how good Ferdinand Marcos was. He built many schools, universities and roads," said the 20-year-old college student in Cavite province, south of Manila.

On Feb. 22 to 25 in 1986, millions of people went to Manila's Epifanio de los Santos Ave (EDSA) to protest Marcos' tyranny. But Nunez said the people committed the "biggest mistake" of overthrowing "a leader that could have made the Philippines better." 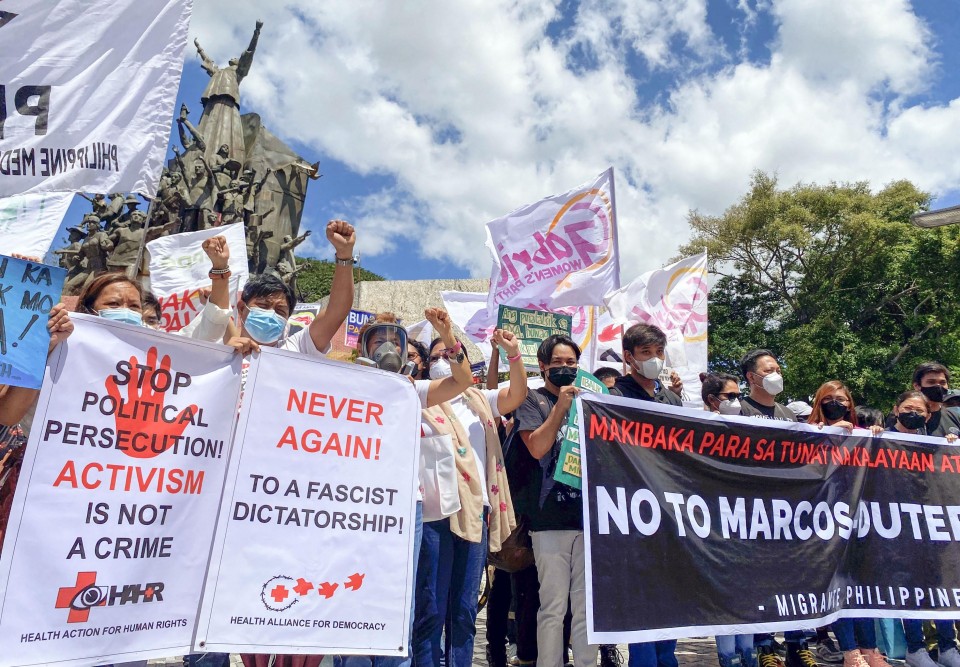 Protesters stage a rally in the Metro Manila area of the Philippines on Feb. 25, 2022, to mark the 36th anniversary of the People Power Revolution that toppled dictator Ferdinand Marcos. (Kyodo) ==Kyodo

Young voters like Nunez are the "dominant users" of the internet that make them "susceptible or vulnerable to alternative or revisionist history that is pushed on social media platforms, like Facebook and YouTube," said political strategist Victor Andres Manhit of the Philippine Stratbase Consultancy Inc.

This adds to the fact that half of the voters "have no recollection" of martial law, he said, in that a 54-year-old voter was barely an adult in 1986.

These alternative "narratives" project Marcos Jr. to be the most qualified candidate, saying that the martial law era from 1972 to 1981 saw the best of the Philippine economy and that reports on the era by mainstream media are biased, Manhit said, adding that the Marcos-Duterte tandem is perceived as strong and unstoppable.

Manhit points to social media as shaping public perception of Marcos Jr. in this election, while the 2016 presidential race gave a "glimpse" of the internet's power when Duterte's campaign relied on bloggers and influencers.

Marcos Jr. has shunned interviews and debates that tackled his father's dictatorship since the campaign started Feb. 8. But observers pointed to the polo shirt similar to the dictator's that he constantly wore and the "Bagong Lipunan" (New Society), a martial law propaganda song revived into a rock version, played in campaign rallies, as referencing the strongman's image.

In the 2016 election when Marcos Jr. ran but lost for vice president, he said, "There are many positive things to talk about from during that time," rejecting common narratives of oppression and failed government in his father's rule, according to a Reuters report. A 2017 interview quoted him as saying that he wanted to "fix" history in favor of his family.

"The Marcoses have been demonized for (36) years," Herdy Yumul, a sociology and public administration professor at Mariano Marcos State University in Batac, Ilocos Norte, said, but added that this is being changed as people began to realize overthrowing the senior Marcos in 1986 did not really help people's lives to improve.

Ilocos Norte province, where the family is from and Marcos Jr. held various local posts between 1981 to 2010, boasts a number of road and energy infrastructures as the achievements of the senior Marcos and his family members, said Yumul, although local media have said the construction includes many projects done by the private sector.

Journalists and data analysts have reported on false and misleading content across social media platforms to whitewash past atrocities. In January, Twitter flagged for manipulation hundreds of accounts supportive of the Marcoses, which Marcos Jr. later disowned.

"What the Marcos regime was is not a matter of opinion. It is a matter of reality and fact. We know very well the corruption, the theft of public money, the privatization of national patrimony," said Ninotchka Rosca, a novelist based in New York.

Rosca was a journalist in Manila when she was imprisoned for six months in 1972 for subversion.

Like her, activist and martial law torture victim Loretta Rosales finds herself in the same battle against the Marcoses half a century later.

"(I) may be not as strong as I used to be, but it's so strange. It's all about distortion of history for the self-interest of a family and their friends," the 82-year-old Rosales said.

Rosales said the Marcoses have "never really left" and rather, kept their influence on the political and military structure intact through cronies and government allies.

Rights watchdog Amnesty International has reported that some 70,000 people were imprisoned, 34,000 tortured and over 3,200 killed during the martial law era. But the government has acknowledged only 11,103 victims, though in 2013 it passed the Human Rights Victims Reparation and Recognition Act, an unprecedented law in Asia to hold the state accountable for its abuses.

On the 36th EDSA revolution anniversary on Feb. 25, Robredo said the "people power" recalls a story of "standing up and fighting for our democracy...whether (through) a peaceful revolt or a very crucial election."

Rosca said the Philippines faces another "historic juncture" in the May election that, "if...we make a mistake, the country will disappear. We, as a people, will disappear," referring to the nation's identity as one that once toppled a dictator.

Philippines kicks off campaign for May 9 presidential election 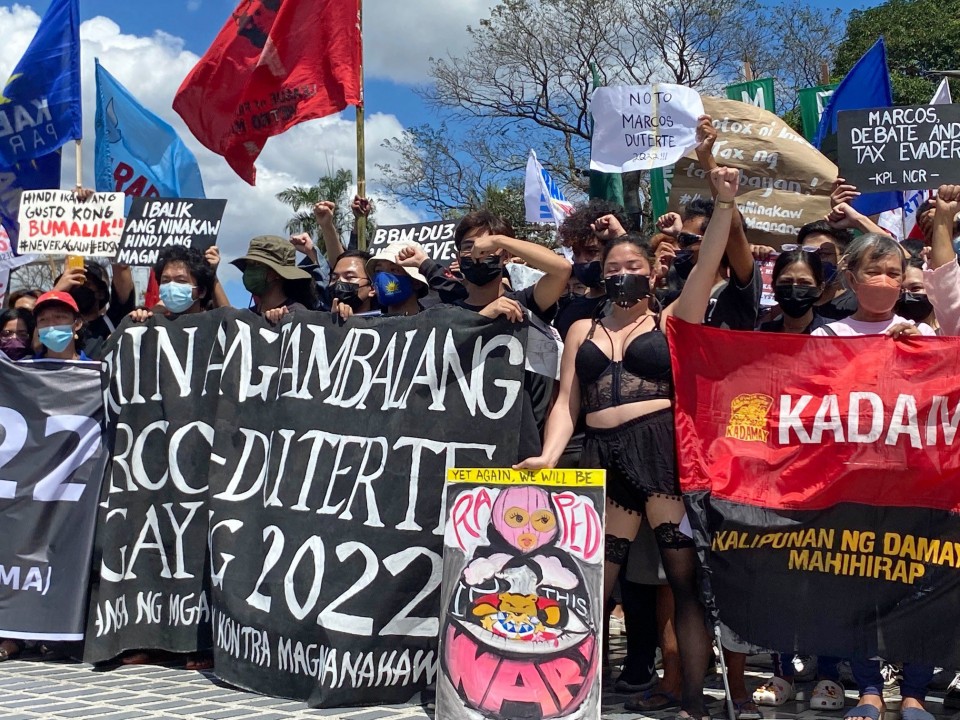 Protesters stage a rally in the Metro Manila area of the Philippines on Feb. 25, 2022, to mark the 36th anniversary of the People Power Revolution that toppled dictator Ferdinand Marcos. (Kyodo) ==Kyodo