Ministers from Japan and African nations highlighted the importance of democracy and the rule of law in their two-day online talks that ended Sunday, amid China's growing assertiveness and Russia's invasion of Ukraine.

"The participants underscored the need for the consolidation of democracy and good governance under the rule of law as a pressing priority," the Japanese Foreign Ministry said in the chair's summary released Monday following the meeting, which precedes the eighth Tokyo International Conference on African Development slated for August. 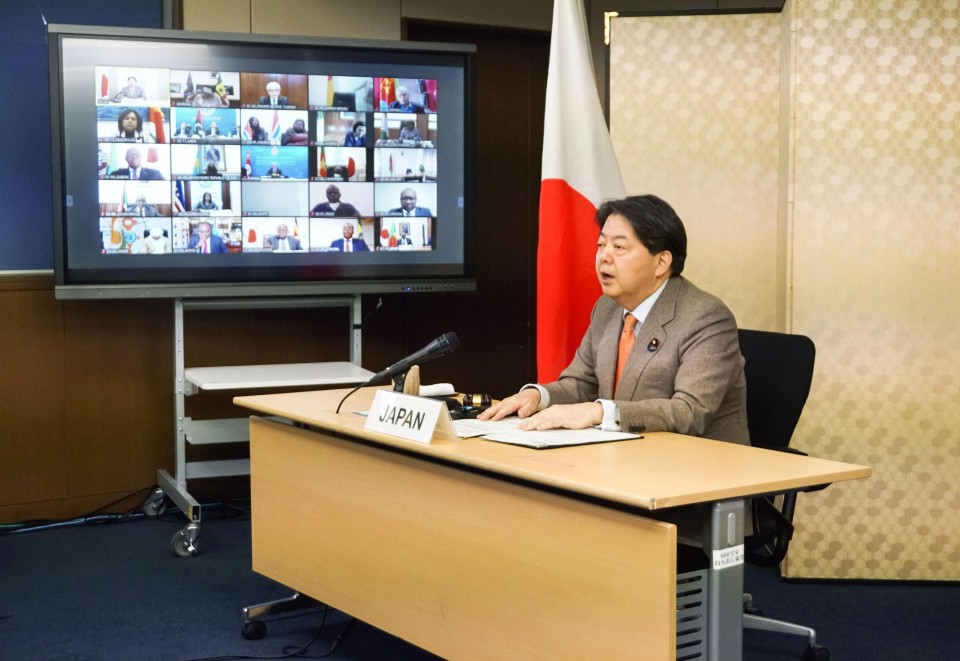 Japanese Foreign Minister Yoshimasa Hayashi addresses an online meeting with African counterparts of the Tokyo International Conference on African Development on March 26, 2022, at his ministry in Tokyo. (Kyodo)

At a time when Beijing has been stepping up its maritime activities in the Indo-Pacific region, the ministers also reaffirmed the importance of "maintaining a rules-based maritime order in accordance with the principles of international law," the summary said.

In an apparent criticism of Chinese financing practices in which countries receiving Chinese investment are sometimes saddled with loans they cannot repay, they agreed that "development finance adhering to international rules and standards, such as debt sustainability, enhanced transparency and mutual accountability" is vital.

China has been accused of adopting a "debt trap" policy in which debt is used as leverage to gain strategic concessions from borrowing nations, such as the long-term lease of port facilities in a resource-rich, strategically important region.

Referring to the Russian invasion of Ukraine launched last month, the ministers also stressed the importance of "respecting sovereignty and territorial integrity," although they fell short of blaming Moscow collectively. Japan has strongly condemned Russia's aggression as "totally unacceptable."

"The participants expressed concern about the situation in Ukraine and its impacts and called for the international community to work together," according to the summary.

As for the coronavirus pandemic, they confirmed the need for the international community to cooperate in addressing its economic and social impact on African nations, and to urge "a robust, sustainable and inclusive development to achieve build back better."

To encourage economic growth in a post-COVID era, the ministers pledged to promote investment in digital transformation-related businesses and a low-carbon and resource-efficient "green economy," underpinned by "a free and open international economic system."

The upcoming TICAD meeting is scheduled for Aug. 27 to 28 under the chairmanship of Tunisia, although whether it will be held in a virtual format is still being considered, according to the ministry.

Co-sponsored by Japan, the United Nations and a few other international organizations, TICAD was launched in 1993. It was last held in August 2019 in the port city of Yokohama, near Tokyo.