New sekiwake Wakatakakage ended No. 7 maegashira Takayasu's unbeaten run in the ongoing basho, forcing him out of the ring to seize a share of the Spring Grand Sumo Tournament lead on Wednesday.

Wakatakakage improved to 6-2 in his career against former ozeki Takayasu and both have 10-1 records after 11 days of the 15-day meet at Edion Arena Osaka. 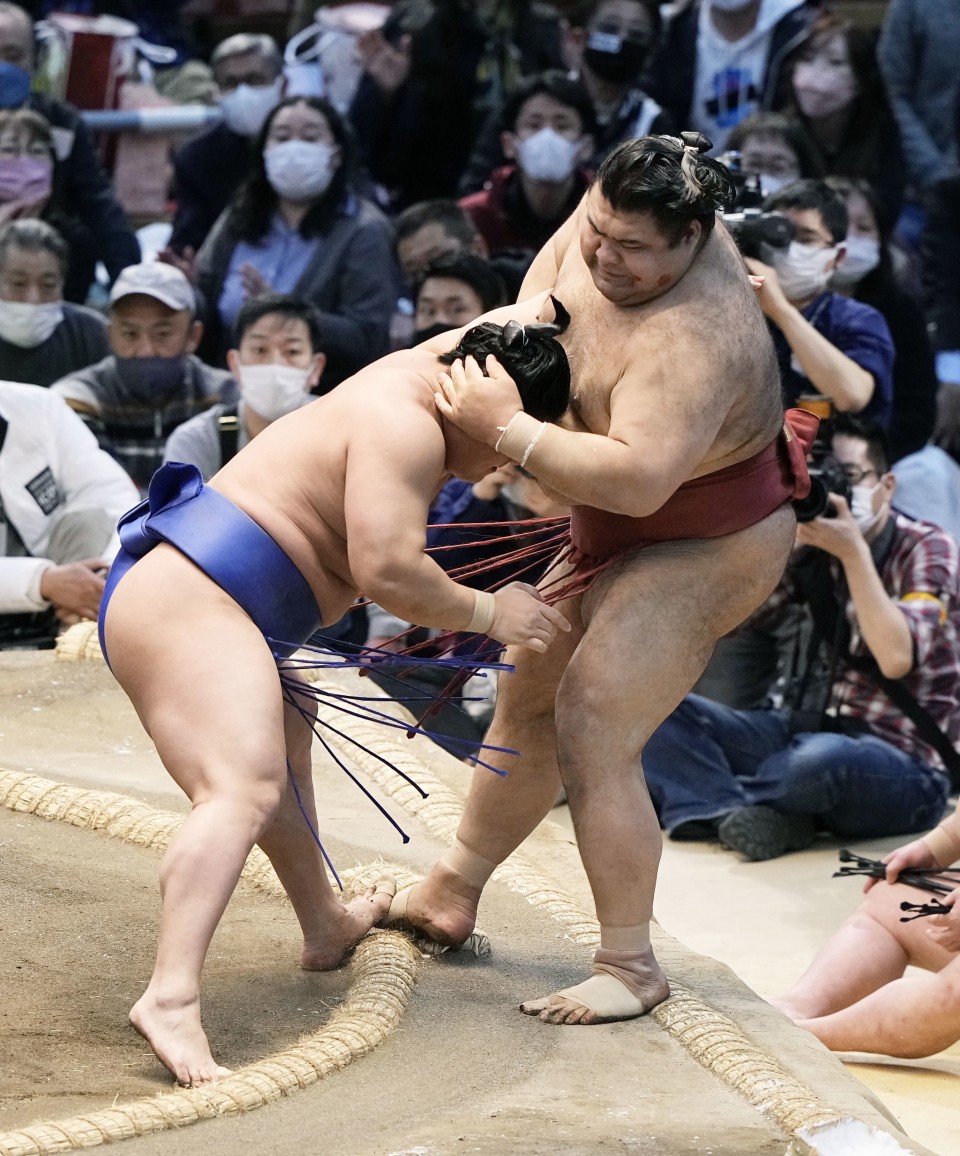 Seeking his first career grand tournament championship, Takayasu was undone by the sekiwake's combination of speed and strength. Wakatakakage came straight on, the top of his head impacting Takayasu's cheek bone, and slowing him slightly.

Takayasu squeezed his opponent's arms together as tightly as he could to avoid surrendering a belt hold, but Wakatakakage persevered, latched on to the back of the maegashira's belt and wrestled him over the straw.

In the day's final bout, ozeki Takakeisho survived an opening-charge misfire against No. 6 Kotonowaka (9-2) to improve to 8-3 and secure his position at sumo's second highest rank for the next tournament.

A demotion-threatened "kadoban ozeki," after withdrawing hurt and failing to win eight bouts in January, Takakeisho put himself at the disadvantage when Kotonowaka easily evaded his charge.

Kotonowaka pivoted, and with the ozeki's back to the straw bales, geared up to ram Takakeisho from the ring, but missed. Takakeisho stepped to one side and gave his opponent a hand as Kotonowaka propelled himself out of the ring.

The loss cost Kotonowaka a share of the tournament lead and left him tied with new ozeki Mitakeumi at 9-2, one win back of the leaders.

Mitakeumi withstood a series of shoves to his face and throat, pressed new sekiwake Abi (6-5) back to the straw and yanked him down when the sekiwake leaned too far forward.

Abi had won 12 bouts in each of his two tournaments since returning to the top-flight makuuchi division from a suspension for breaking coronavirus rules, but fell to 2-9 against Mitakeumi in his career.

Shodai (6-5) took another step toward securing his rank for the next grand tournament. Like Takakeisho, Shodai entered the tourney needing eight wins to avoid being relegated to sekiwake, sumo's third highest rank.

The ozeki won just one of his first six bouts here, but has now won five straight with a "tsukiotoshi" victory over No. 5 Takarafuji (3-8), against whom he is now 16-3 in his career.

New komusubi Hoshoryu was gifted a quick fifth win. The nephew of former yokozuna Asashoryu made a strong start, but the bout ended prematurely when No. 1 Daieisho's left knee buckled, and he slumped to his sixth defeat.

No. 15 Tochinoshin, a former ozeki, improved to 8-3 for his first "kachikoshi" winning record since November 2020. The Georgian finished off No. 11 Terutsuyoshi by hoisting him in the air and carrying him over the straw, a move that was one of his signatures during the height of his career.