Japan and the United States agreed Tuesday to work in close coordination in placing sanctions against Russia in response to its invasion of Ukraine, Finance Minister Shunichi Suzuki said after phone talks with Treasury Secretary Janet Yellen.

The talks were held as the Japanese Finance Ministry froze the assets of Russian President Vladimir Putin and five other Russian officials, including Foreign Minister Sergey Lavrov and Defense Minister Sergei Shoigu, and restricted transactions with the Russian central bank. 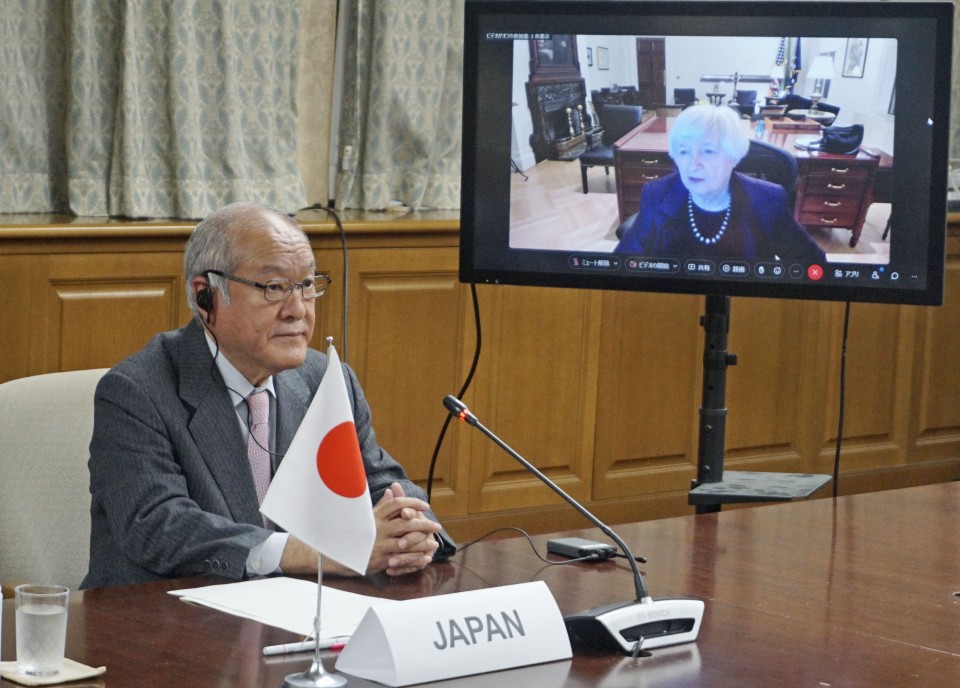 "To protect the foundation of the world order, Japan and the United States agreed to work closely to show that Russia's outrageous act comes with a heavy price," Suzuki told reporters after the talks.

The latest Japanese sanctions came two days after Prime Minister Fumio Kishida said Tokyo would impose asset freezes on Putin and other government officials as additional measures, keeping in step with the United States and Europe in punishing Moscow for its attack on Ukraine.

Kishida said at the time that Japan would also join efforts by other members of the Group of Seven nations to exclude some Russian banks from SWIFT, a key international payment system.

Besides the central bank, two Russian banks -- Promsvyazbank and Vnesheconombank -- are subject to the transaction restrictions. The sanctions on the two banks will take effect on March 31.

The Russians whose assets have been frozen include former Prime Minister Dmitry Medvedev, currently deputy chairman of the Security Council.

Kishida said Monday that Japan will also slap sanctions on Belarus over its "clear involvement" in the Russian aggression, zeroing in on President Alexander Lukashenko and other Belarusian individuals.

Belarus, known for its close ties with Russia, is serving as an entry point for Russian forces invading Ukraine. It will also be subject to Japan's export controls.

Yellen welcomed Japan's action toward the Russian central bank and intention to take action against Belarus during the Tuesday phone talks, according to the U.S. Treasury Department.

Japan's finance, foreign and trade ministries also said Tuesday that the government will ban Japanese companies from exporting goods to a total of 49 Russian organizations and corporations from Tuesday next week.

The 49 organizations include the Russian Defense Ministry, research institutions and companies such as the aircraft manufacturer that produces MiG fighter jets.

The government will separately ban exports of products that can improve Russian military capabilities such as semiconductors.

The finance ministers and central bank governors of Japan and the other Group of Seven nations are slated to meet later Tuesday and expected to discuss procedures to block some Russian banks from SWIFT.

Tokyo unveiled a first set of sanctions against Moscow on Wednesday, a day before Russia launched the invasion, including a ban on the issuance and trading of new Russian sovereign bonds in Japan.