The Nikkei stock index plunged nearly 3 percent on Monday, ending at its lowest level in about 16 months, amid fears over higher fuel costs as the United States and its European partners are actively considering the banning of Russian oil imports in the wake of Moscow's onslaught in Ukraine. 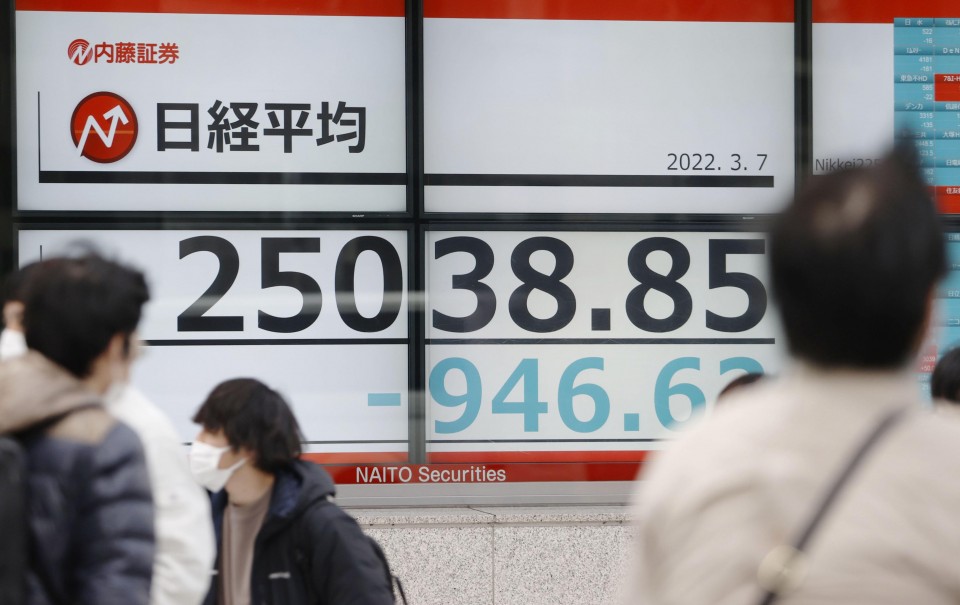 A financial board in Tokyo shows the Nikkei stock index losing more than 900 points at one point on March 7, 2022. (Kyodo)

Crude oil futures jumped after U.S. Secretary of State Antony Blinken said in an interview with CNN on Sunday that Washington is talking with its European partners and allies to "look in a coordinated way" at the prospect of a ban on oil imports from Russia, a major producer.

Meanwhile, growing demand for the perceived safety of gold amid the ongoing conflict in Ukraine also lifted the price of the asset sold by Tokyo's Tanaka Kikinzoku Kogyo K.K., a major precious metal firm, to a record-high 8,109 yen per gram.

The euro briefly dropped to the lower 124 yen range, its lowest level since late November 2020, as investors sold the unit on fears over escalating tensions in the Ukraine conflict, dealers said.

The yield on the benchmark 10-year Japanese government bond fell 0.010 percentage point from Friday's close to 0.140 percent as investors bought the safe-haven debt on the intensifying crisis in Ukraine and a sharp fall in Tokyo stocks.

Tokyo stocks sank from the outset, with the Nikkei briefly nose-diving nearly 1,000 points, as investors unloaded a wide range of shares on concerns over Russia's invasion and its impact on the global economy.

The index dropped to just above the 25,000 psychological threshold in early trading.

"As Russia is a major producer, a potential ban on its oil imports would have a significant impact on the economy. Along with a rise in other commodities, such as wheat, surging oil prices could lead to soaring inflation," said Norihiro Fujito, senior investment strategist at Mitsubishi UFJ Morgan Stanley Securities Co.

Fujito said that companies could also see their profit margin shrink as it would be difficult to offset soaring costs through price raises.

The benchmark Nikkei index plunged over 5 percent since closing at 26,577.27 on Thursday, as market participants have turned risk-averse amid growing pessimism over the Ukraine crisis, brokers said.

Market participants are monitoring developments regarding the third round of talks between representatives of Ukraine and Russia, expected to take place later Monday, although hopes for a cease-fire remain low, brokers said.

On the First Section, declining issues outnumbered advancers 1,920 to 225, while 35 ended unchanged.