Japan will ease its COVID-19 border controls further from March 14, raising the daily cap on entrants from overseas to 7,000 from the current 5,000, Prime Minister Fumio Kishida said Thursday.

With some 150,000 overseas students said to be waiting to enter Japan following roughly two years of coronavirus travel restrictions, Kishida unveiled a new scheme to give priority to such students when business travel demand is not high.

The phased easing of the strict rules, which became the target of criticism at home and abroad, comes in response to calls for Japan to allow more entries, especially by foreign students ahead of the April start of the country's school year. 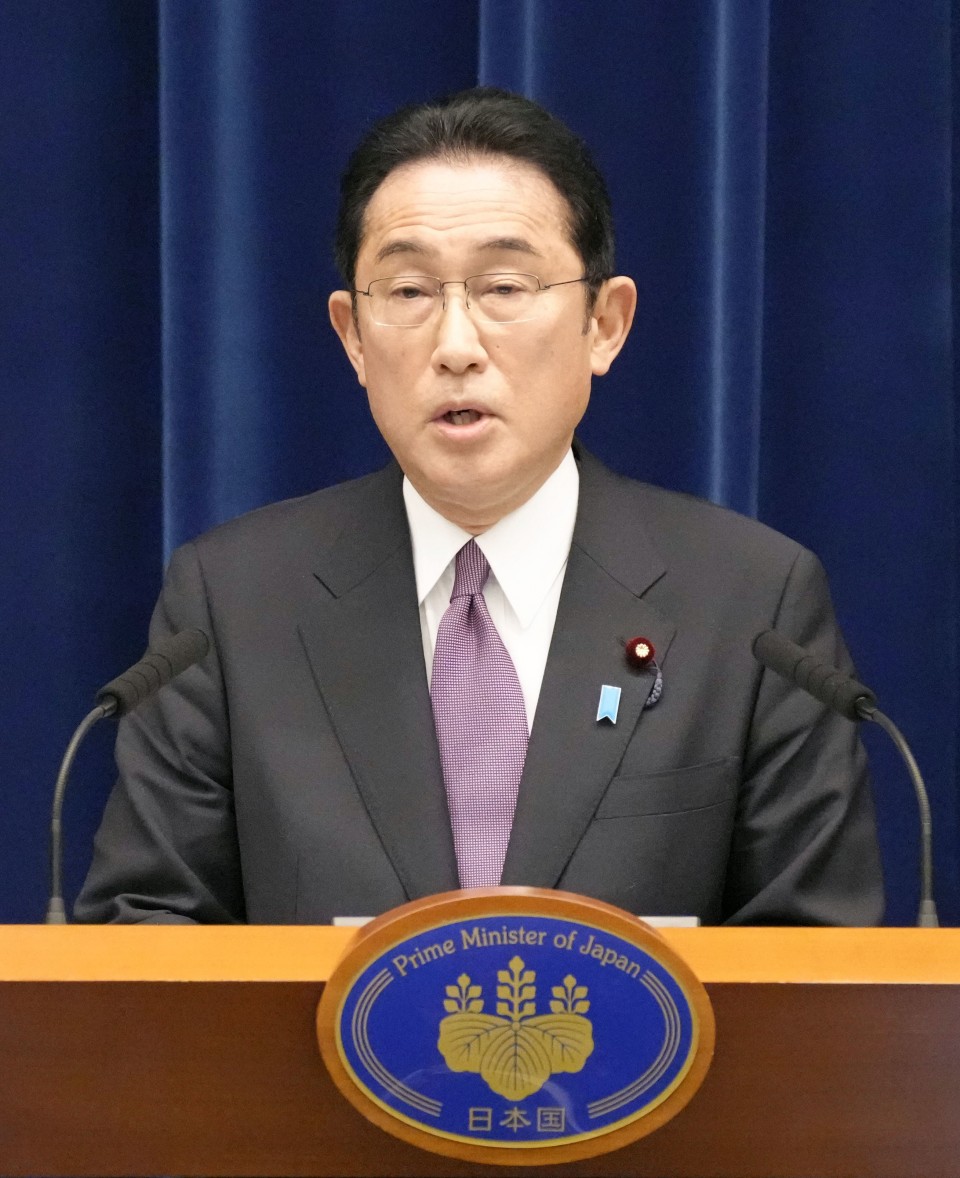 Japanese Prime Minister Fumio Kishida speaks during a press conference at the premier's office in Tokyo on March 3, 2022. (Kyodo)

"We will help students come to Japan by giving them (use of) vacant seats, especially on weekdays when there are not many business travelers," Kishida said, adding that around 1,000 will be allowed on top of the 7,000 daily cap.

"Many foreign students are worried if they can enter Japan before school starts in April," he said.

Japan effectively enforced an entry ban on nonresident foreign nationals in late November as the world grappled with the emergence of the highly transmissible Omicron strain.

Up to 5,000 people, including Japanese nationals overseas, are currently allowed to enter Japan daily following an increase from the previous limit of 3,500 that took effect on Tuesday. Japan still does not allow the entry of foreign tourists.

Nearly 30,000 foreign nationals arrived in January, only a fraction of around 2.4 million before the pandemic, according to immigration data.

Kishida said a further easing of what he used to call "the most stringent" border measures among the Group of Seven nations will come "in stages," taking into account the infection situation at home and abroad and border control measures enforced by other nations.

Around 400,000 foreign nationals have not entered Japan even though they received official documents certifying their eligibility for resident status in 2020 and 2021, Kishida said.

The COVID-19 response has been a top priority for Kishida ahead of a House of Councillors election this summer.

Thirty-one of Japan's 47 prefectures are under a quasi-state of emergency to rein in infections driven by Omicron. The government will extend by two weeks the curbs for Tokyo, Osaka and 16 other prefectures until March 21, Kishida said. 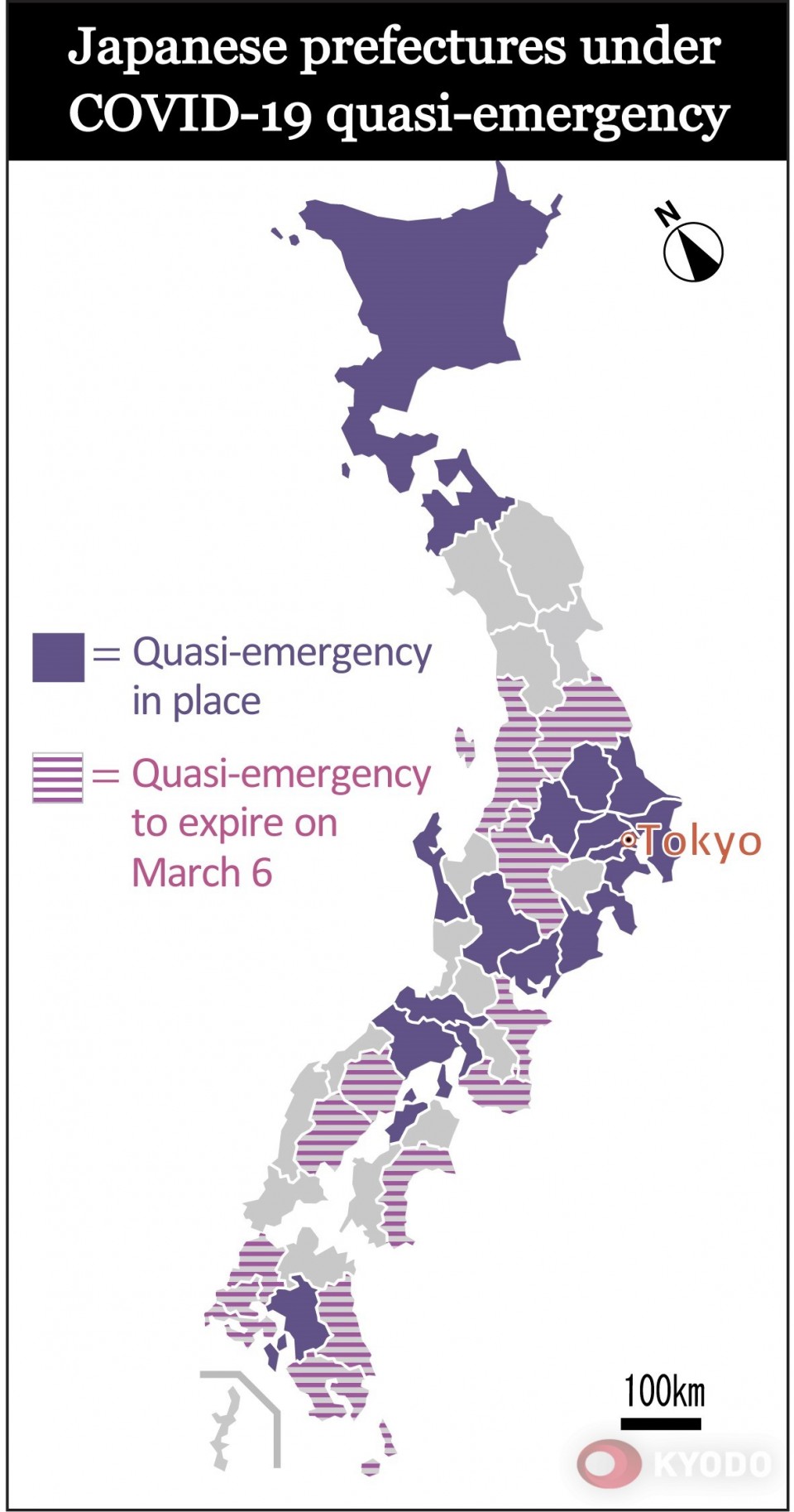 In the remaining 13 prefectures including Fukuoka, Hiroshima and Nagasaki, the anti-virus measures entailing governors' requests to restaurants and bars to close early and stop or limit the serving of alcohol will end as scheduled on Sunday.

The extension comes as the pace of increase in COVID-19 cases has not slowed enough to ease the strain on hospitals. Nationwide, the daily count of newly confirmed cases came to 70,348 on Thursday, of which 12,251 were in Tokyo and 7,749 in Osaka.

"The occupancy rate of hospital beds remains high and we decided to make a judgement with caution after listening to the voices of the local governments," Kishida said.

The quasi-emergency is more limited in terms of restrictions and geographical coverage than a full-blown state of emergency. The government will consult with an advisory panel of health experts and formalize its decision to extend or end the anti-virus measures for the targeted areas on Friday.

During the press conference, Kishida said more economic activity will be allowed if Japan can see an exit from the current sixth wave of COVID-19 "more clearly" but he warned against the BA.2 sub-variant of Omicron that is seen more contagious than the original.

The government has accelerating its program of vaccine booster shots with the goal of 1 million administered a day. The percentage of people who received their third shot stood at around 22 percent Thursday.