A 130-year-old sake brewery in northeastern Japan devoted to manual labor has gained a unique reputation for putting aside any thought of protecting its normally closely-guarded trade secrets to train staff of rival producers.

The acceptance by Dewazakura Sake Brewery Co. in Tendo, Yamagata Prefecture, of trainees from around the country, many of whom are the heirs to famous breweries, is rare in an industry in which processes are kept confidential and even facility tours are often not offered.

But for Dewazakura President Masumi Nakano, 60, sharing his knowledge with other brewers is more important than protecting his intellectual property. "I hope the industry will grow as a whole, stimulated by the growth of each brewery," he said. 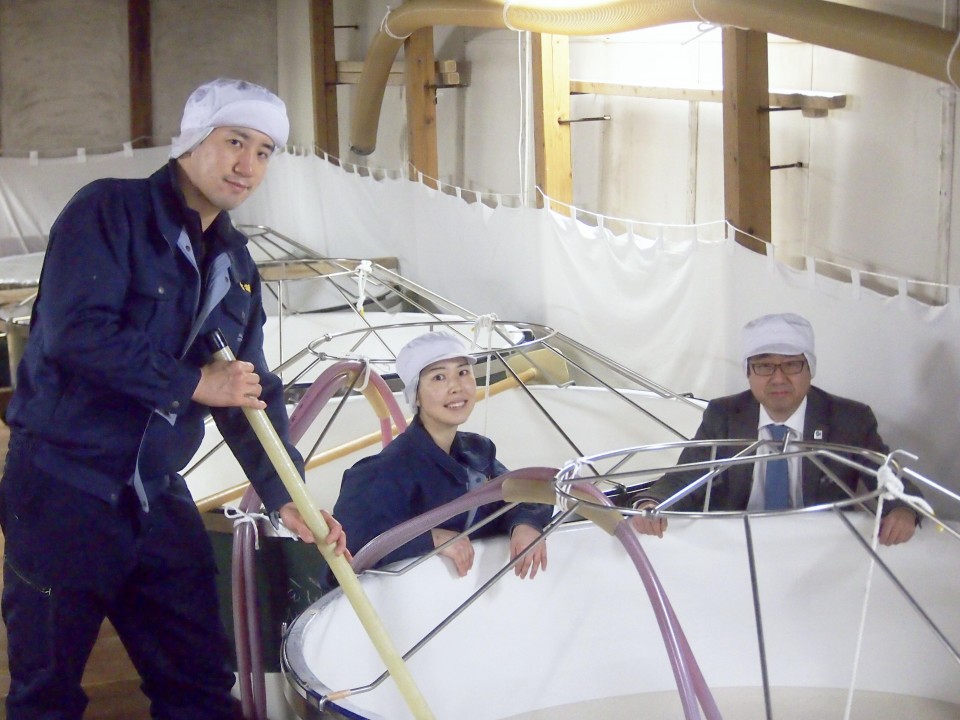 Last December, at Dewazakura's brewery in the city of Yamagata, Risako Kinoshita, 27, a trainee and the person who is set to inherit Kitaya Co. in Yame, Fukuoka Prefecture, appeared perplexed when trying to determine the correct temperature setting as she peered into a large brewing barrel.

Although partially mechanized, Dewazakura's production method has remained more or less unchanged for 100 years. For two years, trainees learn the whole production process, including bottling. Manual labor is involved at almost every step.

"As the overnight work here of producing koji is rare these days, I have learned what should be left to machinery and what shouldn't," said Heiki Isawa, 31, the heir to Katsuyama Shuzo Co. in Sendai, Ibaraki Prefecture, who joined the training course last autumn.

Nakano's father, who also ran the company, started the training program in 1986. Since then, Dewazakura has accepted more than 20 trainees, starting with one from Urazato Syuzo in Tsukuba, Ibaraki. Trainees find out about the course via recommendations from acquaintances of the Nakano family and by word of mouth.

Other breweries that have sent trainees also include Yoshida Sake Brewery Co. in Hakusan, Ishikawa Prefecture, and Miyatahonten Co. in Nichinan, Miyazaki Prefecture.

During the program, trainees also work at the Yamagata Research Institute of Technology, operated by the prefectural government and a center of local sake production.

While Japan has many regional sake brand products known for high quality, unique production methods, and natural characteristics of the production areas, Yamagata Prefecture's sake is protected as intellectual property under the government's geographical identification, or GI, system.

Yamagata is the first of the nation's 47 prefectures to have received the GI designation in the "refined sake" category, reflecting prefecture-wide efforts to promote its sake.

Through the institute, breweries conduct an active information exchange in the prefecture. They can establish a network with local brewers and learn management know-how, including exporting sake.

Takeshi Sakurai, 42, a former trainee and now president of Asama Shuzo Co. in the town of Naganohara, Gunma Prefecture, said, "The prefecture-wide efforts in Yamagata have been amazing."

Kinoshita said the program influenced her as the next generation of her family's business. "If I'd learned business practices at home, I'd be seen as "future president in any case." But I am not treated that way here. I understand now what it is to play a supporting role," she said.

Isawa added, "I now think about how a leader should act."

Answering the oft-asked question of whether other breweries are simply stealing Dewazakura's trade secrets, Nakano said, "Comparable technology emerges sooner or later even if you hide yours," adding that conversely, new information comes to those whose production methods are open. This leads to a variety of good regional sake.

"The way to enjoy sake is to compare regional tastes offered by each brewery. To make the enjoyment sustainable, I want to educate as many young entrepreneurs as possible," he said.