Former ozeki Takayasu, who has led the Spring Grand Sumo Tournament since Day 1, regained the sole lead on Friday with his 12th win.

Takayasu, currently a No. 7 maegashira, entered the 13th day of the 15-day meet at Edion Arena Osaka tied with new sekiwake Wakatakakage (11-2), who lost the preceding bout to new ozeki Mitakeumi (10-3). 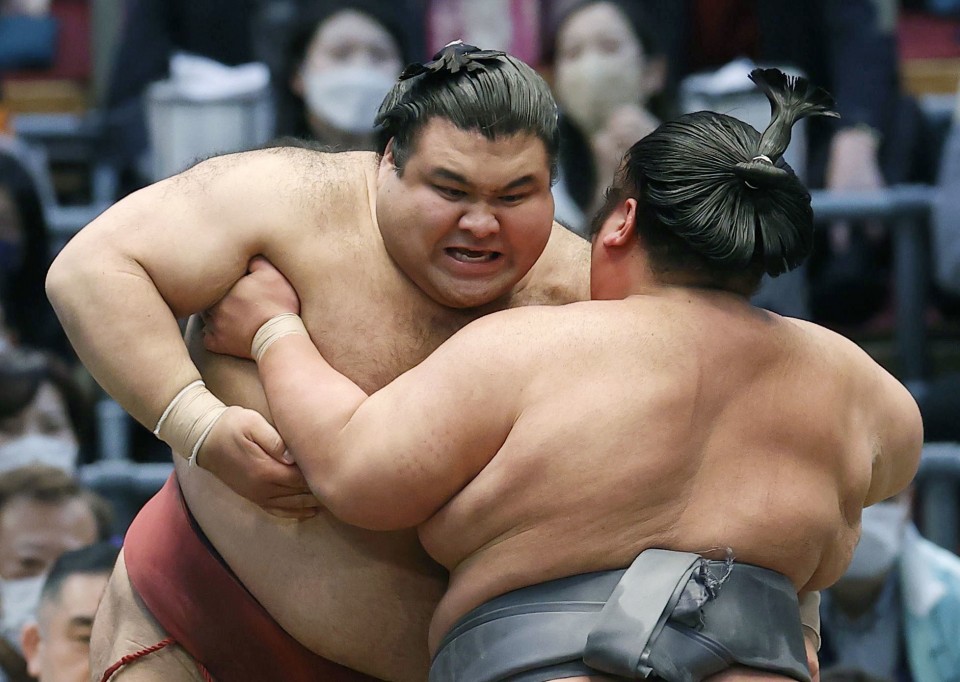 Against Takakeisho (8-5), the sport's top pushing and shoving master, Takayasu refused to be cornered. He sparred with the ozeki, keeping Takakeisho from building up a head of steam while constantly presenting a moving target.

Takayasu, who has long excelled at moving laterally, repeatedly outflanked his opponent, seized a belt hold and finished off the ozeki with a slick overarm throw.

"I was able to execute some high-paced sumo," said Takayasu, who is aiming for his first career grand tournament championship.

Wakatakakage, a speedy powerful and unpredictable wrestler, was quickly cornered. On the opening charge, Mitakeumi lodged both of his arms under his opponent's, and remained in complete control until forcing him out.

The win keeps the ozeki in the hunt for a second straight championship to add to his victory in January.

No. 6 Kotonowaka (10-3), who started the day two wins back of the joint leaders, forced out lackluster ozeki Shodai to his sixth loss to also remain in the hunt for a possible championship.

Shodai, a demotion-threatened "kadoban" ozeki, will try to secure the eighth win needed to avoid demotion to sekiwake, sumo's third highest rank. On Saturday he will take on Takayasu, against whom he is 15-9 in his career.

Also on Saturday, Mitakeumi will face Kotonowaka, while Wakatakakage will go against Takakeisho, who has won five of their six career bouts.

New sekiwake Abi moved to within a win of earning his winning record, with a ferocious counterattack that drove Endo (7-6) out of the ring after the No. 4 maegashira got the better of the opening charge.

New komusubi Hoshoryu (6-7) fell to within one loss of a losing record. The nephew of former Mongolian yokozuna Asashoryu toppled over backward under pressure from towering former sekiwake Ichinojo (9-4).

Fellow komusubi Takanosho salvaged some dignity in what has been a disappointing tournament, improving to 4-9 with a win over veteran No. 5 Takarafuji (4-9).