A Japanese court ordered the central government Friday to compensate a man over his forced sterilization under a now-defunct eugenics protection law, the second such ruling among similar suits filed nationwide, potentially affecting the outcome of future cases.

Overturning a lower court decision, the Tokyo High Court found the 1948 law unconstitutional and awarded 15 million yen ($128,000) in damages to the 78-year-old plaintiff, who uses the pseudonym Saburo Kita. The Tokyo resident had demanded 30 million yen.

Kita had been sterilized without informed consent in 1957 when he was around 14 years old and placed in a child welfare facility for alleged delinquencies in the northeastern prefecture of Miyagi. He sued the government in May 2018 at the Tokyo District Court. 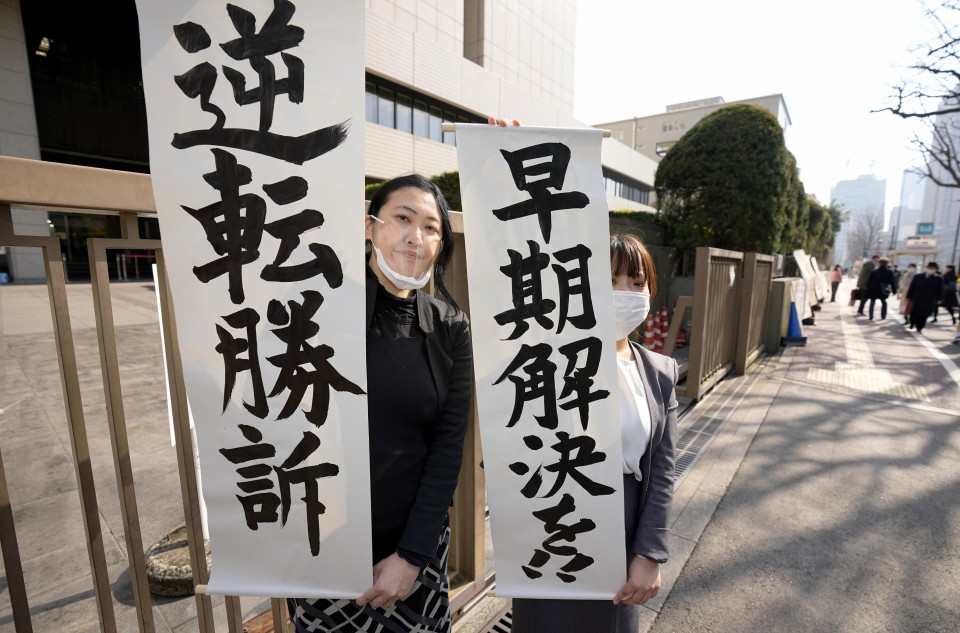 Lawyers hold banners declaring victory in a lawsuit outside the Tokyo High Court on March 11, 2022, after the court ordered the government to pay damages to a 78-year-old man who was forcibly sterilized in 1957 under a now-defunct eugenics protection law. (Kyodo)

"It was a long road. I feel like I'm dreaming to have gotten this ruling and full of emotion," Kita said at a press conference following the high court ruling.

Presiding Judge Yutaka Hirata made a comment after the ruling, which is rare for a judge to do, saying, "I want the plaintiff to live happily after this. It is, of course, the government's responsibility, as well as everyone within society, to create a society where discrimination does not exist."

Starting in 2018, similar suits have been filed with nine courts across Japan, but until now, only the Osaka High Court had ordered state compensation in February.

Some Japanese courts had earlier underlined the law's unconstitutionality but rejected claims of damages because the statute of limitations had expired 20 years after the forced surgeries.

In the Kita case, the Tokyo District Court recognized in June 2020 that the forced surgery infringed on his freedom to choose whether to have a child guaranteed under Article 13 of the Japanese Constitution. But it turned down the damages claim, saying the statute of limitations had expired.

Last month, the Osaka High Court became the first to award damages over forced sterilization, saying the statute of limitations should not be applied as it "extremely contravenes justice and fairness." It told the state to pay a total of 27.5 million yen to three plaintiffs.

Chief Cabinet Secretary Hirokazu Matsuno said Friday the government will consider whether to appeal the Tokyo High Court verdict after examining it with relevant ministries.

"For the victims who had most of their lives stolen, the last atonement that the government can make is not to appeal the Tokyo High Court ruling," they said.

Between 1948 and 1996, the eugenics protection law authorized the sterilization of people with intellectual disabilities, mental illnesses or hereditary disorders.

About 25,000 people were sterilized, including 16,500 who were operated on without their consent, according to government data.

The Osaka court also accused lawmakers from that time of being "negligent" for enacting the law even though it was clearly "inhumane and discriminatory."

Legislation was enacted in 2019 to pay 3.2 million yen in state compensation to each person who underwent forced sterilization.

As of late February, the government has authorized the lump-sum payment to 974 people, according to the welfare ministry.

The law was finally scrapped in 1996 after a disabled Japanese woman called for its abolishment at the U.N.-coordinated International Conference on Population and Development two years earlier.