Japan eased COVID-19 border controls on Tuesday, setting its limit on new entrants at 5,000 per day, up from the previous 3,500, and reducing or exempting quarantine periods for both Japanese and foreign nationals.

Within the daily cap, which was relaxed for the first time in three months, foreign nationals will be able to enter Japan for purposes other than tourism.

But more than 400,000 people already eligible for visas have been unable to enter the country as of Jan. 4, according to the Immigration Services Agency of Japan, and calls for further easing of the controls remain strong among business and academic communities at home and abroad. 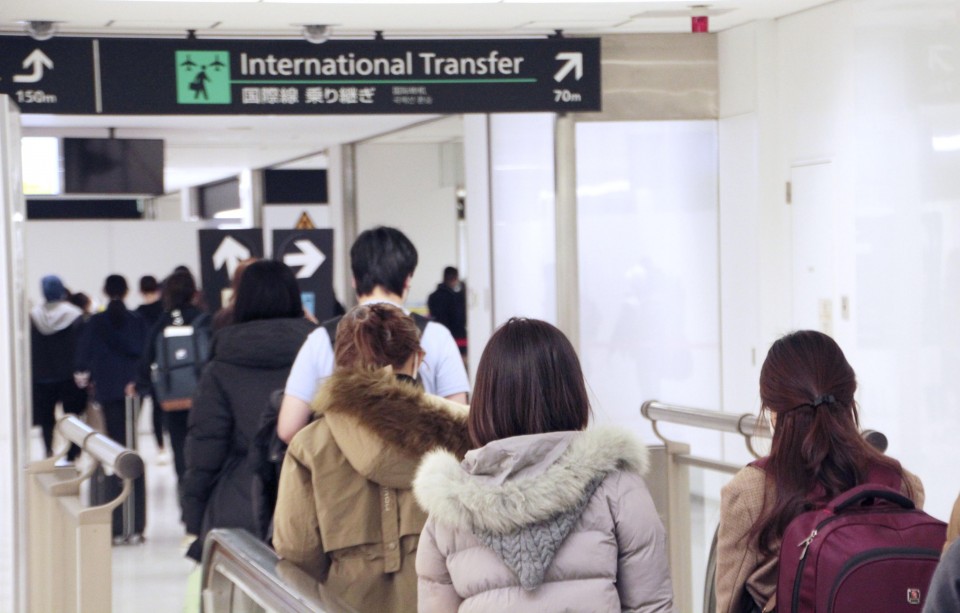 People arrive at Narita airport near Tokyo from Hanoi, Vietnam, on March 1, 2022. Japan eased its cap on the number of daily new entrants from overseas, introduced to prevent the spread of the coronavirus, from 3,500 to 5,000 the same day. (Kyodo) ==Kyodo

Japan's entry ban on nonresident foreigners effective from late November to the end of February, initially aimed at keeping the Omicron variant of the coronavirus at bay, has sparked a chorus of criticism for being too strict and not based on epidemiological reasoning.

After arriving in Japan, travelers will now be asked to quarantine for three days and required to test negative for the virus on the last day of that period.

Those who have been vaccinated three times and depart from countries where infections are stabilizing will not need to quarantine.

"I was able to smoothly return to Japan since I have completed my third round of inoculation and was exempt from quarantine," said Akira Onodera, 57, who arrived at Narita airport near Tokyo from Hanoi, Vietnam, after working there.

"But I am worried about whether the easing would cause a resurgence of the infections," he said.

Chief Cabinet Secretary Hirokazu Matsuno said foreign students and technical interns have been waiting for entry into Japan and that the country is seeking to allow more people in.

"By considering infection situations in Japan and abroad as well as demand of Japanese nationals returning, we will increase international traffic in steps," Matsuno said.

Since late November, only a fraction of nonresident foreigners wishing to enter Japan had been granted entry as exceptions. The relaxation came ahead of the start of the new school and business year in April.

While business leaders, academics and even ruling party lawmakers have argued Japan's policy is still too tough and the disadvantages far outweigh the benefits, the government is considering raising the daily ceiling in stages to allow in up to tens of thousands of new entrants in the near future.