Japan will strip Russia of its "most favored nation" status to punish Moscow for its aggression in Ukraine, following in the footsteps of the United States and European nations, Prime Minister Fumio Kishida said Wednesday.

To hold Russia accountable for its "irrational and inhumane" onslaught, Japan will take additional sanctions by expanding the scope of asset freezes targeting elites and business oligarchs close to President Vladimir Putin, he said. 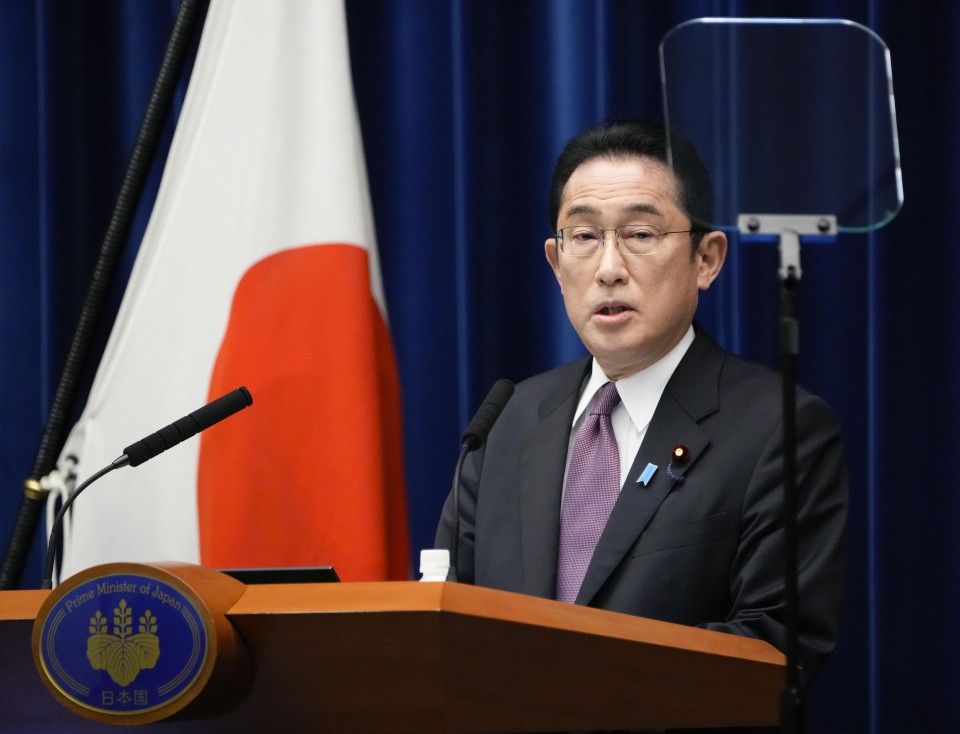 Japanese Prime Minister Fumio Kishida meets the press at his office in Tokyo on March 16, 2022. Japan will end its COVID-19 quasi-state of emergency as scheduled the following week in all 18 prefectures currently under the measure, including Tokyo and Osaka, as the number of new infections has been trending downward, Kishida said. (Kyodo) ==Kyodo

"We will take severe sanctions against Russia in coordination with the United States and European nations in the G-7," Kishida said at a press conference, noting that "resolute" action is necessary.

"Do we want an international order based on universal values such as freedom, democracy, the rule of law and human rights, or one that tolerates the use of force to change the status quo and is based on the rule of force?" he said.

The "most favored nation" status under World Trade Organization rules has given Russia the best possible trade terms on key products.

The Group of Seven -- Britain, Canada, France, Germany, Italy, Japan and the United States, plus the European Union -- had vowed to take independent actions to stop their favorable treatment of Russia.

The status removal would mean higher tariffs on Russian products. Consumers in Japan would see Russian crabs, salmon and other seafood items sold at higher prices.

Revoking the status by itself does not immediately affect energy resources, ranging from liquefied natural gas, crude oil and coal, to palladium, a key metal used in electronics, because they are tariff-free.

For resource-poor Japan, how far it can go in punishing Moscow is a delicate balancing act, given Russia is one of the major LNG exporters to the country.

"For a net importer of energy and food items, the blows to the economy and people's livelihoods are concerning," he said, as Russia has begun to take retaliatory steps and commodity prices have been surging.

"But we can never give in to threats posed by Russia to show that we are with the people of Ukraine and to protect the peace and order of the international community," he said.

Asked about the future of oil and gas projects on Sakhalin island in the Russian Far East, the prime minister stressed the need to factor in energy security before deciding on cutting reliance on Russian resources.

The government and Japanese companies hold interests in the projects. The Russian military attack since late February has prompted U.S. oil major Exxon Mobil Corp. to announce its withdrawal from the Sakhalin 1 and Britain's Shell PLC from the Sakhalin 2.

Japan has joined other members of the G-7 in removing some Russian banks from the international payment network SWIFT but not an oil embargo imposed by the United States, a net energy exporter.

Following through on the G-7 pledge, Japan will block Russian access to financing by international organizations, such as the International Monetary Fund and the World Bank, Kishida said.

The war in Ukraine has sent ripples beyond Europe to the Indo-Pacific region where China's economic and military clout has heightened tensions and raised regional concerns. With China and Russia having close relations, eyes are on Beijing's response as pressure mounts on Moscow to end its offensive, a violation of international law.

Any unilateral use of force to change the status quo should not be tolerated in Ukraine or anywhere, Kishida said, adding, "We call on China to take responsible action."

Kishida vowed to send additional supplies to Ukraine on top of bulletproof vests and helmets and to extend humanitarian assistance by taking in people fleeing the conflict-hit Eastern European nation and assisting them in their daily lives in Japan.

The government has begun accepting people from Ukraine via third countries, giving them short-term visas. Those who have relatives and acquaintances have received priority in entering Japan, but the government is arranging to open the door for those who do not and allow them to work if their stay is prolonged.

"In Japan, we say, 'We have each other when in trouble,'" Kishida said. "We would like to offer help to people evacuating Ukraine."

Japan to ban exports of nearly 300 items to Russia, Belarus