FOCUS: China may warm to Japan to tackle economic slump, but faces hurdles

China may try to cozy up to Japan in the short run to curb a possible economic downturn, as President Xi Jinping has been keen to secure a controversial third term as leader at the ruling Communist Party's twice-a-decade congress in fall.

But Tokyo is unlikely to take a softer approach toward Beijing, with the two Asian powers recently at odds over China's security challenges to Taiwan, its temporary detention of a Japanese diplomat and its unwillingness to condemn Russia's invasion of Ukraine. 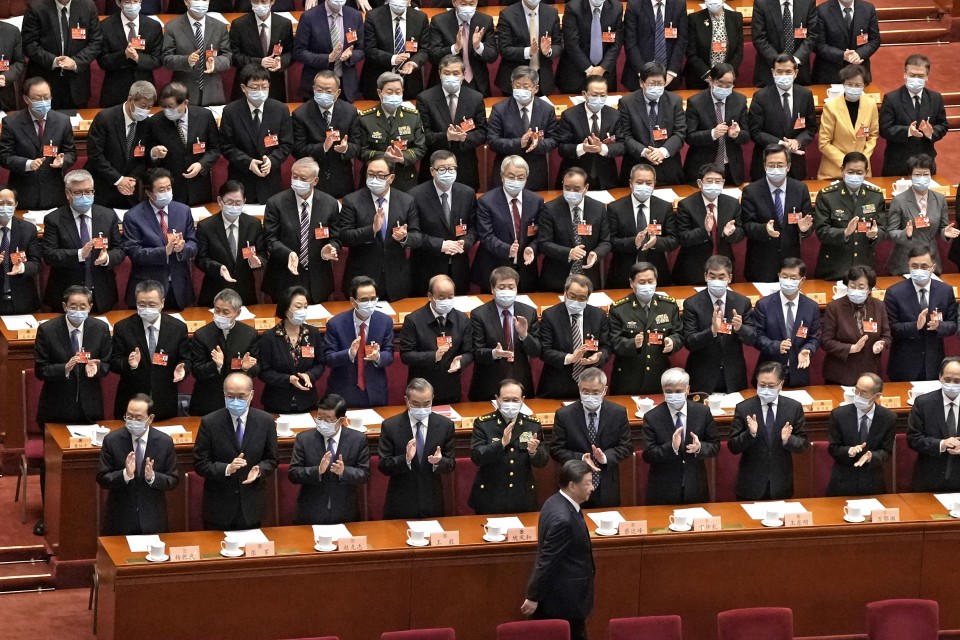 Chinese President Xi Jinping (front) is pictured before the closing ceremony of the Chinese People's Political Consultative Conference at the Great Hall of the People in Beijing on March 10, 2022. (Kyodo) ==Kyodo

At this year's annual session of parliament that ended Friday, China's top leadership mapped out steps to stabilize economic development to prevent social disorder from eroding public support for the ruling party headed by Xi.

On the diplomatic front, China has refrained from making policy decisions provoking its neighbors such as Japan, while avoiding expressing clear support for Russia's attack on Ukraine, launched just four days after the closing of the Beijing Winter Olympics.

One month before parliament in 2021, Beijing also enforced a law allowing its coast guard to use weapons when foreign ships involved in illegal acts in waters it claims disobey orders, making Sino-Japanese ties more fragile over maritime security.

"It appears that President Xi has prepared the groundwork for his re-election at the party's congress. There was no storm at this year's congress. The next aim is to prop up the economy for real," a diplomatic source in Beijing said.

In a bid to offset tame domestic demand amid the COVID-19 pandemic, China might attempt to increase exports, especially those to Japan, as this year marks the 50th anniversary of the normalization of their diplomatic relations, he said. 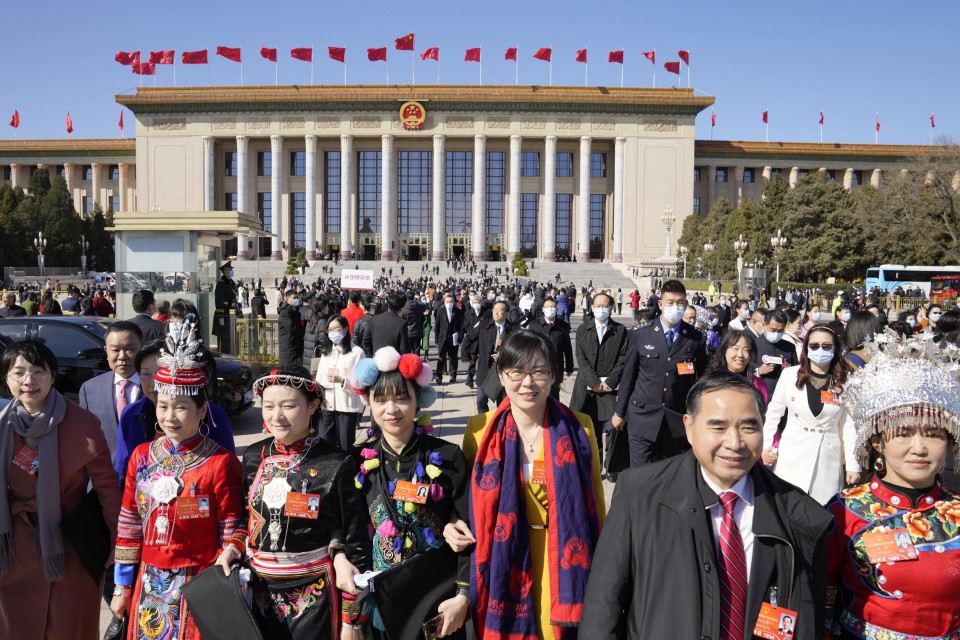 Representatives from across China leave the Great Hall of the People in Beijing after attending the opening ceremony of the National People's Congress on March 5, 2022. (Kyodo) ==Kyodo

As China "does not want to run into trouble" in the diplomatic field ahead of the party's congress, the 50th anniversary "would give Xi a good incentive to get closer to Japan in economic terms," the source said, but he added, "Things may not go as China expects."

In 2021, China's economy expanded 8.1 percent from a year earlier. In the October-December period, however, it grew a tepid 4.0 percent against a backdrop of worries about potential financial market turmoil and another wave of novel coronavirus infections.

During his policy speech at the opening of this year's seven-day National People's Congress, Chinese Premier Li Keqiang said the government has cut a gross domestic product growth target for 2022 to around 5.5 percent from last year's over 6.0 percent.

"In our work this year, we must make economic stability our top priority," the premier said.

Li, meanwhile, voiced fears about the prospects of the global economy, but he added China will "continue to expand international economic cooperation and trade," suggesting that the Asian nation has been eager to boost exports to shore up the broader economy.

He also said, "The prudent monetary policy should be both flexible and appropriate, with reasonably ample liquidity being maintained," with some analysts saying China might be hoping to keep the yuan, also known as the renminbi, lower against other currencies.

The yuan's depreciation usually bolsters exports by making products of Chinese companies cheaper abroad and driving up the value of overseas revenue in yuan terms.

Although the future of the world economy hinges on how the Ukraine crisis will develop, China has "adhered to the policy of aggressively utilizing foreign capital," said Toru Nishihama, chief economist at Dai-ichi Life Research Institute in Tokyo.

Gao Hong, a former director of the Institute of Japanese Studies at the Chinese Academy of Social Sciences, said in an interview with Kyodo News that Beijing and Tokyo have a "relatively strong foundation" for economic cooperation.

"The Japanese business community is friendly to China," Gao said, adding that if economic cooperation, a "stabilizer" for bilateral relations, functions effectively without interruption, Beijing and Tokyo can "secure stable political ties to some extent."

Nevertheless, the relationship between the two Asian countries became frayed after former Japanese Prime Minister Shinzo Abe in December said any emergency concerning self-ruled Taiwan would be an emergency for Japan and for the Japan-U.S. security alliance.

Abe, Japan's longest-serving prime minister, still heads the biggest faction within the ruling Liberal Democratic Party after stepping down as the nation's leader in 2020.

Communist-led China and democratic Taiwan have been governed separately since they split in 1949 as the result of a civil war. Beijing has regarded the island as a renegade province to be reunified with the mainland, by force if necessary. 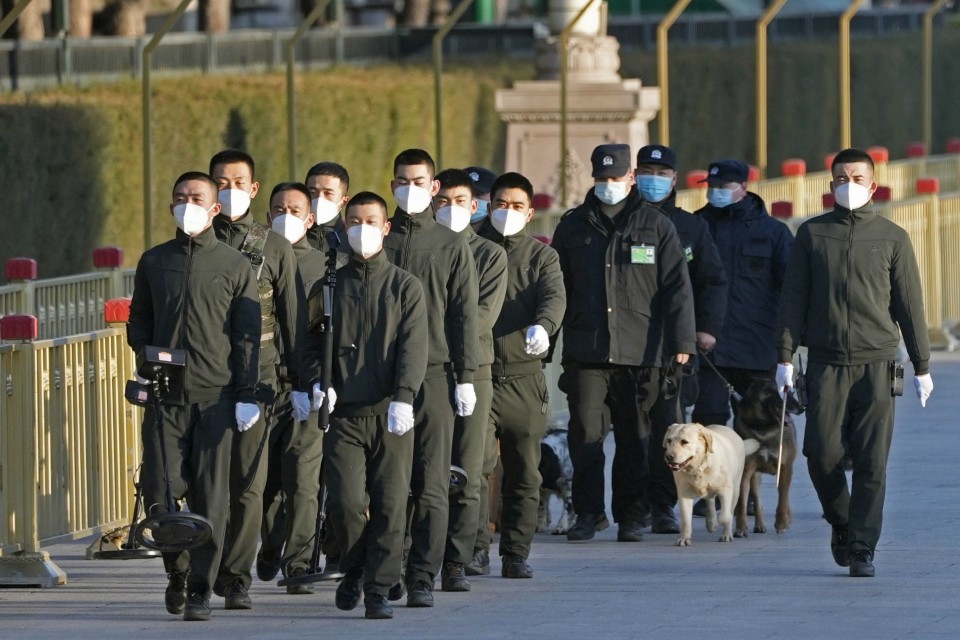 Police officers patrol near the Great Hall of the People in Beijing on March 5, 2022, ahead of the opening ceremony of the National People's Congress. (Kyodo) ==Kyodo

Tokyo severed diplomatic ties with Taipei and established them with Beijing in 1972. A joint communique signed that year stipulates China "reiterates that Taiwan is an inalienable part of the territory" of it and Japan "fully understands and respects this stand."

Chinese Foreign Minister Wang Yi said at a press conference on Monday on the sidelines of this year's parliament, "There are always some people in Japan who are reluctant to see the rapid development of China and stable China-Japan relations."

"Major sensitive issues such as history and Taiwan are foundational to mutual trust between our two countries," advising Japan to "avoid serious disruption to our bilateral relations in the future."

China's brief detention in late February of a Japanese diplomat in Beijing while on duty, which Tokyo claims violated the Vienna Convention on Diplomatic Relations, has also triggered a backlash from the government of Prime Minister Fumio Kishida.

The international treaty requires the hosting state to prevent any disturbance of the peace of a diplomatic mission or impairment of its dignity.

Japan "cannot overlook" the incident and "will never accept it," Foreign Minister Yoshimasa Hayashi told reporters following the detention, adding the government lodged a protest with China through diplomatic channels.

A source familiar with bilateral ties said Japan "will not extend an olive branch to China even if China tries to move closer to Japan economically."

(Shinsuke Osawa in Beijing contributed to this story)