FOCUS: Experts fret at risks of consumer scams as age of adulthood lowered

As Japan lowers the age of adulthood by two years from 20 in April, among the many new freedoms and responsibilities facing 18- and 19-year-olds will be the ability to enter into consumer contracts without parental consent.

They will, for instance, be able to take out loans or make investments, purchase cellphones, or buy various services over the internet.

But stripped of the protection of the "right to cancel a minor's contract" after the fact by either the person or a guardian, those with little or no experience as adults could be particularly susceptible to scams, experts fret. The key to protecting them, they say, will be preventing such problems before they happen.

According to the National Consumer Affairs Center of Japan, which deals with consumer complaints, consultations in fiscal 2020 by those aged 20-24, the new adult cohort at that time, exceeded the number of what were then pre-adults aged 18 and 19 by almost 40 percent. 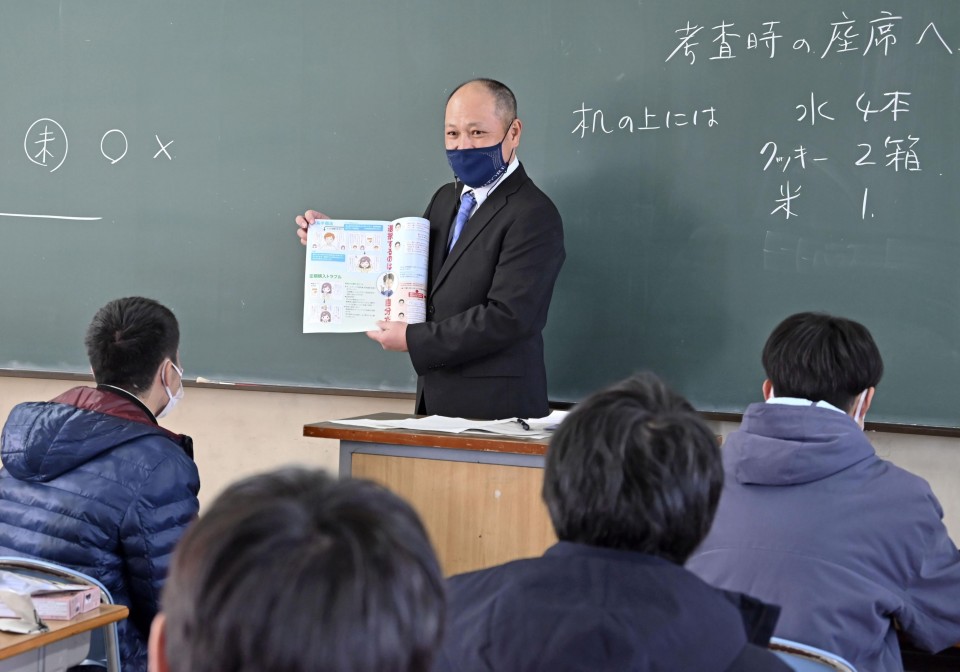 A photo taken on Feb. 28, 2022, shows a teacher explaining a pamphlet concerning issues about the lowering of the age of adulthood handed out to third-year students of the Osaka Prefectural Otori High School. (Kyodo)

Many in the 20-24 age range said they had fallen into trouble after purchasing business materials such as manuals on "how to earn a high income," buying dietary supplements, or cosmetic medical services. They also spent more than 18- and 19-year-olds.

Facing such a reality, the government, as part of a revised law on consumer contracts, has sought to bolster measures that would allow adults to nullify contracts, such as with unscrupulous dating sites.

Other crooked business practices might involve salespeople, for example, arousing anxiety to get consumers to purchase expensive, and often unnecessary, products with deceptive sales pitches.

The Consumer Affairs Agency is increasing awareness among high school students using teaching materials in home economics and civics classes to address concerns about consumer contracts and managing finances as an adult.

Too often, young people learn the hard way. One Tokyo man in his 20s took an interest in "binary options," an exotic financial product to predict exchange rate fluctuations, after being convinced of their virtues by college seniors and classmates.

Called "all-or-nothing options" because the payoff is a fixed sum or nothing at all, his 500,000 yen ($4,130) initial investment covered a security system and a USB memory stick containing programming tools that it was claimed could analyze trades.

The outlet even advised that he could "borrow from his student loan and a consumer credit service." The man took out two such loans while making up the difference through credit card installment payments.

But despite the outlet's claims of a big payout, the man saw no profits. The vender then told him he would get a referral fee of 100,000 yen if he made sales and sold the USB memory stick, so the man arranged a subcontract to invite friends to invest. Although he no longer is investing in the plan, he has leftover debts of around 400,000 yen. "I'd like to be paid back even if it's just a small amount," he said.

"It's necessary to take measures based on the fact that young people who have just become adults are being targeted by malicious businesses and improve their public awareness. We aim to share information and collaborate with related organizations to prevent this type of victimization," the spokesperson said. 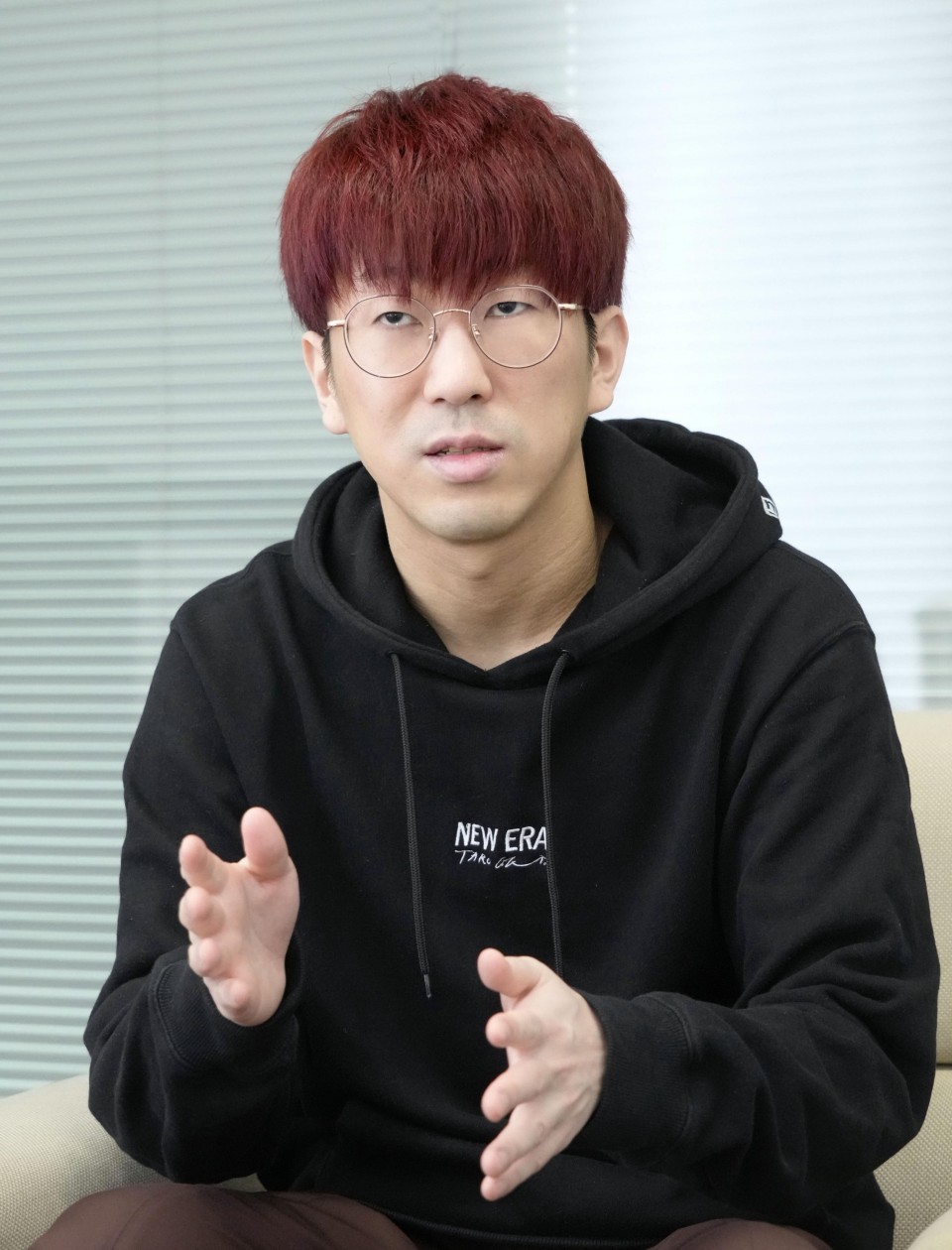 Kazutoshi Inudo, director of the short film "18 years old," speaks during an interview at the Kyodo News headquarters in Tokyo on Jan. 26, 2022. (Kyodo)

Kazutoshi Inudo directed the short film "18 years old," the story of the trouble experienced by a high school girl whose friend approaches her about an investment opportunity since she can "earn more than in a part-time job" now that she is an 18-year-old adult.

In an interview with Kyodo News, Inudo said he hopes the film about the dangers of falling prey to pyramid schemes will be used in classrooms and watched by parents alike, allowing people to think about "what it means to be an adult," he said.

"We started to see news about the lowering of the age of adulthood at the end of last year, but there are a lot of people who don't know what will change or what the issues are. It's too late to understand once an incident happens," Inudo said.

He chose pyramid schemes as the film's theme because he wished to describe the dangers of becoming a victim and a victimizer, as often is the case in pernicious relationships with close friends involved in multilevel marketing.

"I myself have been solicited for referral sales, and the person referring will always make grand statements like 'it's for your dreams' or for 'investing in yourself,'" he said. "So people end up believing in a 'good thing' offered by someone close. Without much thought, they accept a proposal but might end up losing their money and a friend."

At the end of February, third-year students of the Osaka Prefectural Otori High School were handed pamphlets under the heading "A decision that can change your life," regarding issues involving lowering the age of adulthood and raising consumer awareness, such as rights including cooling-off periods for cancelation of a purchase.

It was created by the "Osaka Prefecture Consumer Education Student Leaders Association," the leader of consumer education for the prefecture, which started a training program in 2016.

Kayo Nakatani, 62, who teaches home economics at Otori High School said, "We offer a lot of practical training to give the students the knowledge to live on their own," adding that although in-person classes are difficult due to the COVID-19 pandemic, "we want to do what we can by utilizing education materials and providing lectures from experts."

In Tokyo, the education ministry hosted a consumer education event in early February with high school and college faculty and local officials involved in consumer administration in attendance. In the discussion, the participants were divided into small groups at the venue and online and debated how to get young people to think about becoming adults, starting with what people can do in the home while delving into local issues.

Riko Fujibayashi, a 21-year-old sophomore at the University of Hyogo, conducted a survey to form an idea of how many high school and university students around her have encountered consumer-related trouble. She discovered that some 33 percent were victims themselves or knew people who were.

One person talked about being convinced to "buy a manual from a friend on how to earn money." Another mentioned a site that "suddenly demanded a 3 million yen payment." 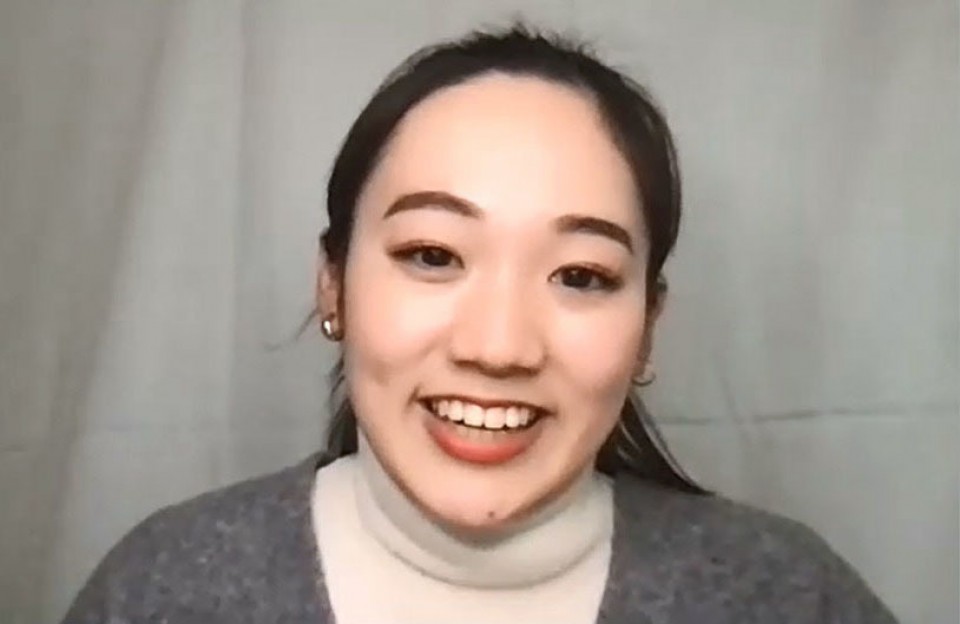 Riko Fujibayashi, a University of Hyogo sophomore and representative of a student group promoting smart consumers, speaks during an online interview with Kyodo News on Feb. 18, 2022. (Kyodo)

In the survey conducted from mid-January to early February, Fujibayashi received responses from 100 men and women ages 16 to 25 via social media and by asking people directly at her part-time job and university. She spoke as the representative of a student group that promotes smart consumers at an online event hosted by the Japan Federation of Bar Associations about measures necessary to address issues after lowering the age of adulthood in April.

"If there are this many people around me (who have fallen into trouble), there must be a lot more in society," Fujibayashi said. "The damage will only get worse with solicitation by vendors taking advantage of things that interest young people for which they lack knowledge such as virtual currencies and multilevel marketing."