Ukrainian President Volodymyr Zelenskyy on Wednesday asked Japan to ban trade with Russia to stop what he called the "tsunami" of its invasion into Ukraine, as he stressed the need to ramp up sanctions to punish Moscow.

Speaking to Japanese lawmakers by video link, Zelenskyy underscored the "extremely dangerous" state of all nuclear power plants in his country after Russia took control of the site of the Chernobyl nuclear accident. Russia is also said to be preparing to use chemical weapons, he said. 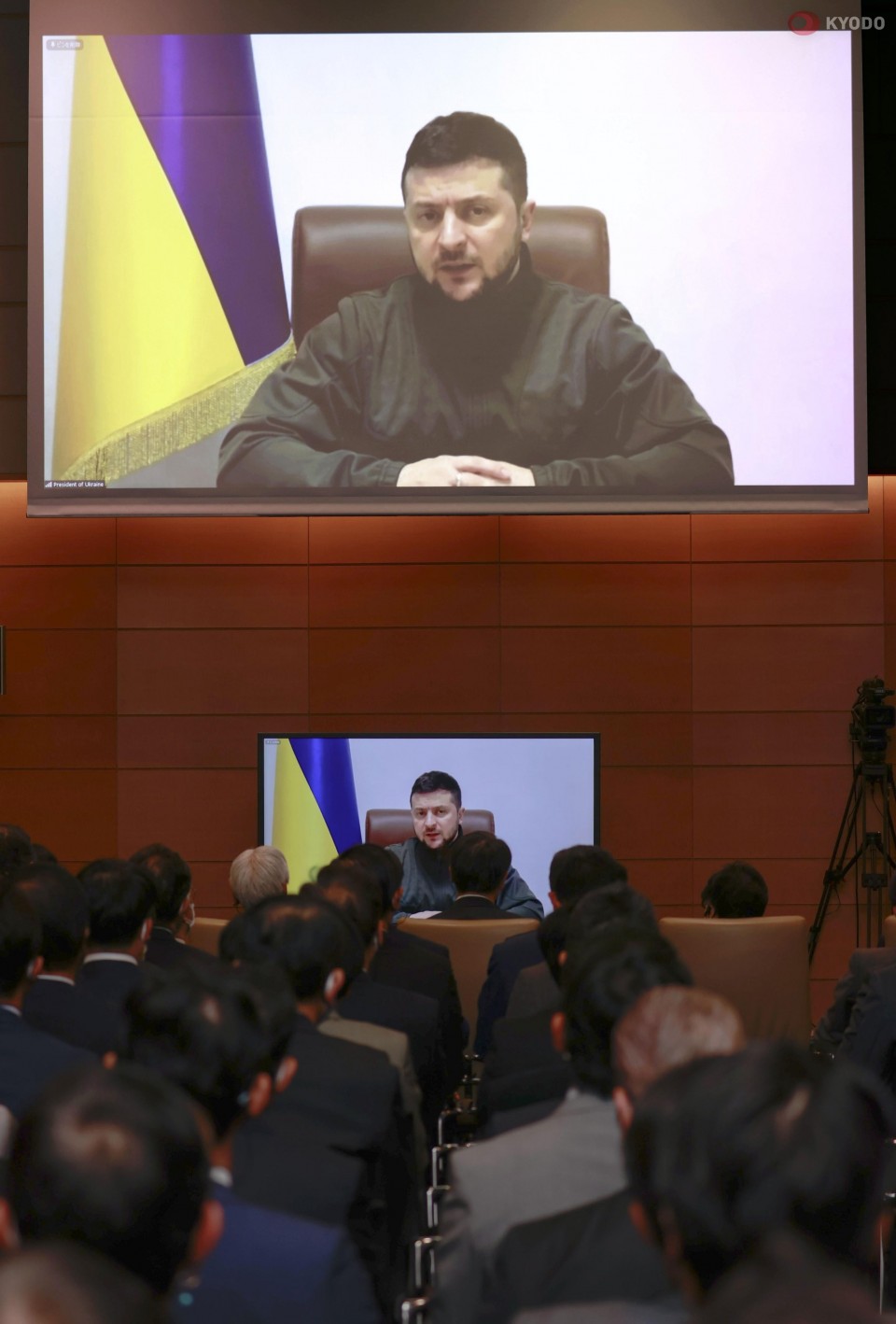 "Japan is the first Asian country that applied pressure on Russia. We want this to continue," Zelenskyy said in the first virtual address to Japanese lawmakers by a foreign leader, thanking Japan for its assistance since the crisis unfolded.

"To stop the tsunami of invasion in Ukraine, it is important to introduce a ban on trade with Russia," he said.

Zelenskyy appeared on large screens in a packed conference room in parliament at around 6 p.m. as around 500 lawmakers gave him a round of applause. Prime Minister Fumio Kishida and other Cabinet members were among the participants who listened to his roughly 12-minute speech that led to a standing ovation.

The address came just hours before Kishida was set to leave for Brussels to attend a Group of Seven summit on Thursday on the fringes of an emergency leaders' meeting of the North Atlantic Treaty Organization.

"I was moved by the strong determination and courage exhibited by President Zelenskyy to protect his country and its people even in an extremely difficult situation," Kishida told reporters afterward.

"We will consider additional sanctions against Russia and more humanitarian assistance (to Ukraine) on top of the $100 million already pledged," Kishida said, adding that Moscow's "reckless" act should not be tolerated. 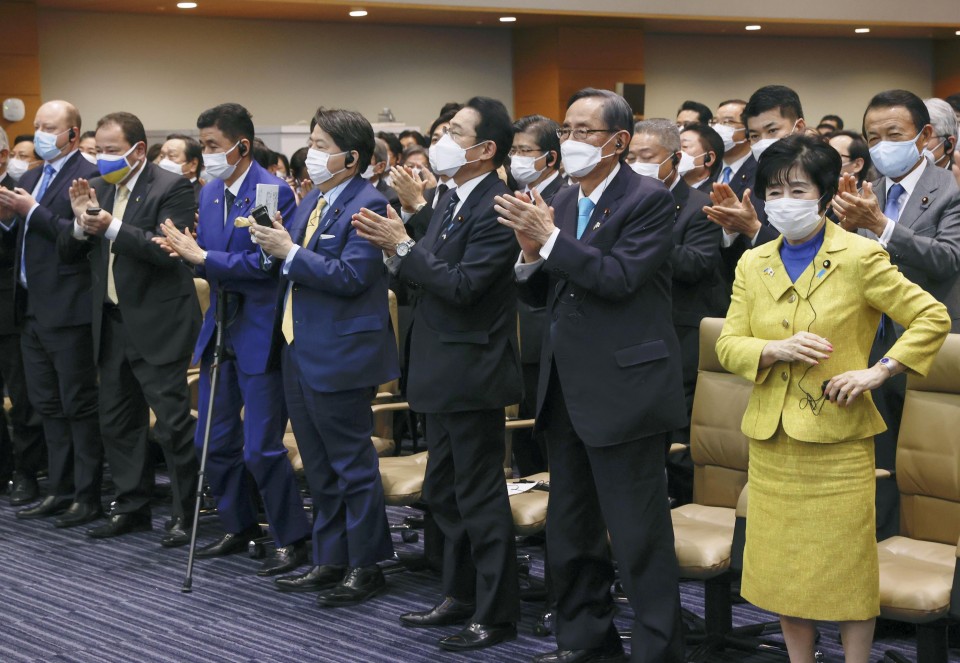 Japan, a member of the Group of Seven advanced countries, has expressed solidarity with the people of Ukraine, extending humanitarian assistance.

Tokyo has begun accepting people fleeing the war-ravaged nation in a rare move for a country whose immigration and refugee policy is often criticized as too strict.

Japan has also imposed sanctions on Russia over its aggression in tandem with other G-7 members, hardening its stance toward Moscow. As a result, Russia said this week it will suspend negotiations over a decades-old territorial dispute that has prevented the two nations from signing a postwar peace treaty.

Russia's attacks, including more than 1,000 missiles fired, have brought destruction to Ukrainian cities, killing scores of civilians and leaving many Ukrainians to flee their homes for safety.

"No one is certain or confident about the future," Zelenskyy told the Japanese lawmakers through an interpreter.

"We must ensure that each one of those people who have been evacuated can return to where they used to be," the president said. "I'm sure people in Japan understand how it feels, the yearning to go back home."

The northeastern part of Japan was devastated by an earthquake and tsunami that caused the worst nuclear accident since Chernobyl in March 2011.

Zelenskyy has been pushing for direct talks with Russian President Vladimir Putin to end the war. But he warned on a recent CNN program of a Third World War if negotiations fail.

"Russia's attack on Ukraine has made the world an unstable place," the Ukrainian leader said Wednesday. "To aggressors who want war, we need to send a very strong warning. We need to send them a strong message that peace should not be destroyed."

Ukrainian forces continue to resist the Russian invasion launched Feb. 24, putting up stiff resistance in cities such as Mariupol -- a key area that links the Donbas region containing pro-Russian separatists with Crimea, annexed by Russia in 2014 -- as they come under heavy Russian bombardment.

The humanitarian crisis has been deepening day by day, and over 10 million have fled, either displaced inside Ukraine or as refugees abroad, Filippo Grandi, the U.N. high commissioner for refugees, has tweeted.

Among the responsibilities of those who wage war, everywhere in the world, is the suffering inflicted on civilians who are forced to flee their homes.

The war in Ukraine is so devastating that 10 million have fled — either displaced inside the country, or as refugees abroad.

Zelenskyy has been rallying global support for his country's fight against Russia. In recent speeches addressed to lawmakers in Britain, Germany and the United States, Zelenskyy has sought to put the ordeal faced by the people of Ukraine into a historical context that would strike a chord with his audience.

In Britain's House of Commons, Zelenskyy vowed to fight to the end using language echoing the famous "We shall fight on the beaches" speech by Winston Churchill, who was British prime minister at the time of his country's struggle against Nazi Germany during World War II.

Zelenskyy asked for German help to destroy what he called a new wall set up by Russia to divide Europe, a nod to the Berlin Wall, a symbol of the Cold War era in which Germany was divided between communist East Germany and West Germany until the former's 1989 collapse.

"Remember Pearl Harbor," the Ukrainian president told U.S. lawmakers last week, referring to the 1941 Japanese assault on the harbor in Hawaii. He also touched on the Sept. 11 terror attacks on the United States in 2001.

Ukraine seeks more aid in war, urges Biden to be "leader of peace"