Spring Grand Sumo Tournament winner Wakatakakage gradually grew in confidence throughout the 15-day competition in Osaka but was nevertheless surprised by his success, the newly crowned champion said Monday.

The 27-year-old sekiwake from Fukushima Prefecture won the first Emperor's Cup of his career Sunday by beating former ozeki and current No. 7 maegashira Takayasu in a one-bout championship playoff after the joint overnight leaders finished deadlocked at 12-3. 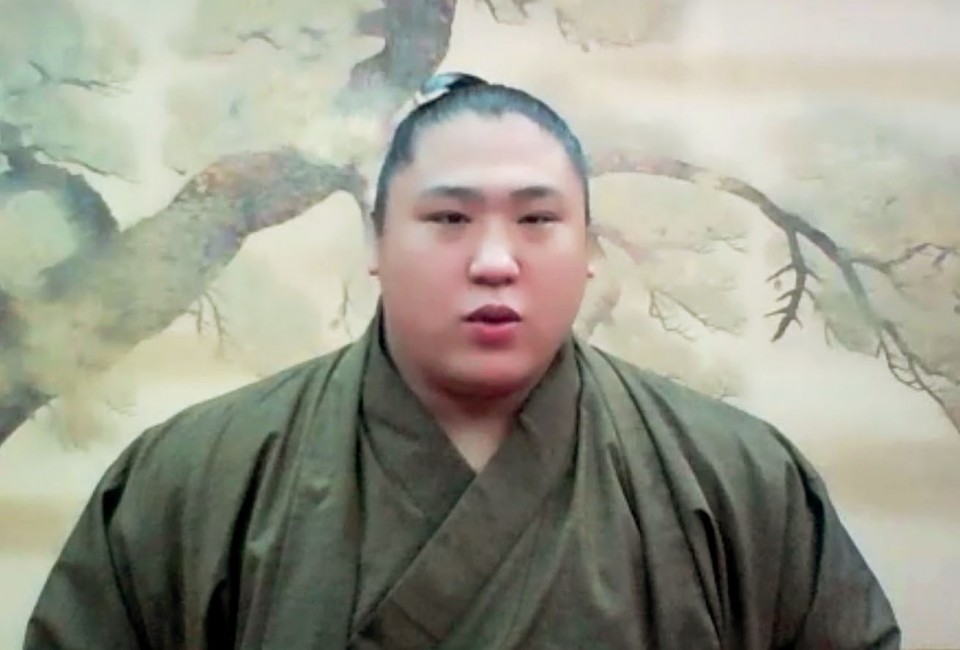 Wakatakakage attends an online press conference on March 28, 2022, a day after winning the first Emperor's Cup of his career at the Spring Grand Sumo Tournament. (Kyodo)

Following Takayasu's loss to sekiwake Abi, Wakatakakage had a chance to clinch the title by winning the day's final scheduled bout but could not overcome resurgent ozeki Shodai.

In a thrilling playoff match, Wakatakakage was driven back to the edge before toppling Takayasu with a pulling overarm throw, just keeping his feet inside the ring.

"I gradually began feeling that I could win the championship. That came as a surprise, even to me," Wakatakakage said during an online press conference. "I was happy I could wrestle with my own style of sumo at this tournament."

Having risen to sumo's third-highest rank before the meet, Wakatakakage became the first newly promoted sekiwake to win a grand tournament in 86 years since Futabayama, the legendary yokozuna from the 1930s and 1940s, who holds the record of winning 69 straight bouts.

The grandson of the late former komusubi Wakabayama, Wakatakakage belongs to the Arashio stable, where his stablemates include his older brothers Wakamotoharu, a No. 9 maegashira, and Wakatakamoto, who competes in the third-tier makushita division.

"I think my grandfather must be really pleased," Wakatakakage said.

At a weight of 130 kilograms, the 181-centimeter tall Wakatakakage was the third lightest in the top-tier makuuchi division at a time when the average size of wrestlers continues to get bigger.

But his fair and square pushing style while keeping a low center of gravity and impressive lower body strength that aided his tenacity saw him rack up victories and attract a growing number of fans.

With a championship under his belt, he will be expected to continue winning and take the next step to ozeki, sumo's second-highest rank.

"As ozeki is one level higher, that's the goal I'm aiming for," Wakatakakage said. "Results from the next tournament onward will be important, so I want to make sure I put in the proper practice."

It was the first time in 50 years a wrestler from Fukushima lifted the Emperor's Cup, while Wakatakakage's triumph happened to fall in the month of March -- 11 years after the northeastern region of Japan, including Fukushima, was wrecked by the earthquake, tsunami and ensuing nuclear disaster.

"What I can do is to perform well on the raised ring. I was determined to leave everything out there over the 15 days," said Wakatakakage. "I hope to keep delivering good performances."

Wakatakakage added that he enjoyed re-watching footage of locals' reactions the moment he won the playoff.

"I was stunned as they were more excited than I'd have imagined."