Already-qualified Japan were held to a 1-1 draw at home against battling Vietnam on Tuesday in their last Group B match of the final Asian qualifying round for this year's World Cup in Qatar.

Under-par Samurai Blue conceded for the first time in six games before captain Maya Yoshida scored the 54th-minute leveler at Saitama Stadium. The home side, 23rd in the FIFA ranking, had two goals ruled out late on against the 98th-ranked visitors. 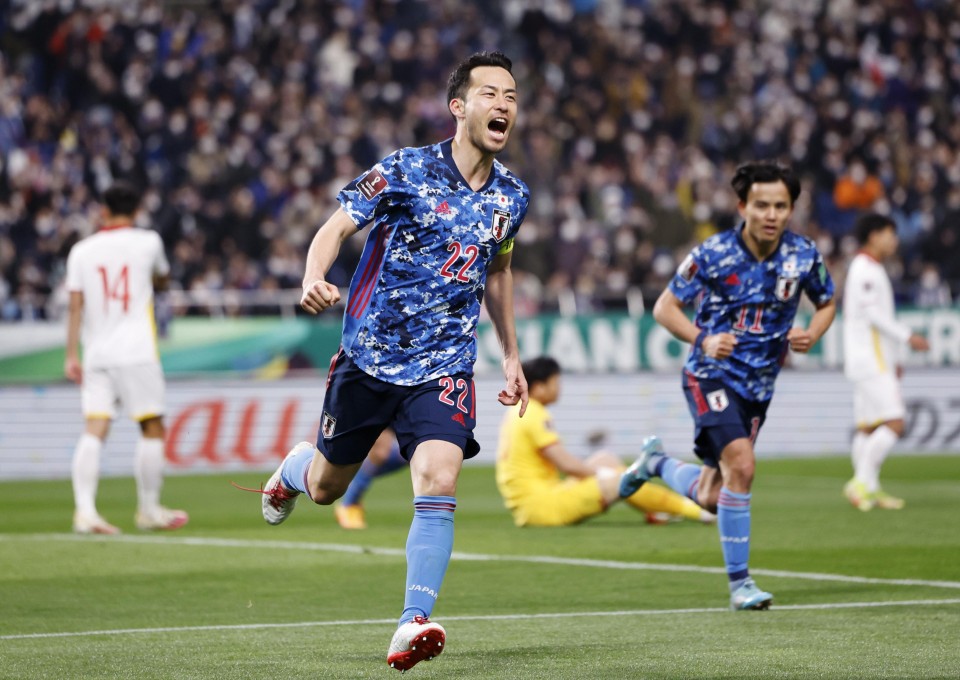 Japan's Maya Yoshida (22) celebrates after scoring a goal in the second half of a Group B football match against Vietnam at Saitama Stadium in Saitama, near Tokyo, on March 29, 2022, in the final group-phase round of Asian qualifying for the 2022 World Cup in Qatar. (Kyodo)

"The fact that we could not get a win today means we need to get much stronger heading toward the World Cup," manager Hajime Moriyasu said before 44,600 fans in the venue after a Japan national team match was held without a cap on spectators for the first time since the start of the coronavirus pandemic.

"We hope to be so at the finals and produce results that will please all the fans."

With the qualification guaranteed, Moriyasu only retained defenders Yoshida and Miki Yamane in his starting eleven from Thursday's win over Australia. Celtic's Reo Hatate was handed his debut in a three-man midfield, while the underused Takefusa Kubo of Mallorca occupied the right wing.

But the experimental-looking side were dealt a sucker punch in the 20th-minute when Nguyen Thanh Binh headed past veteran keeper Eiji Kawashima from a corner with their only shot of the half.

Genki Haraguchi sent his low effort inches wide from distance, lone forward Ayase Ueda's close-range shot was blocked by defender Que Ngoc Hai, and Kubo's header was caught late on as the home side dominated but trailed at the break.

Junya Ito came on for Hatate at the start of the second half as Moriyasu moved Kubo into a No. 10 role, and the 20-year-old played a part in Yoshida's equalizer.

The center-back launched a counter with a ball to Kubo, whose pass from the left found Haraguchi on the edge of the box. The midfielder's effort was spilled by keeper Tran Nguyen Manh before Yoshida cooly pounced with the outside of his right foot.

The introductions of regular starters Hidemasa Morita, Ao Tanaka and Takumi Minamino just past the hour mark saw the home team move the ball more smoothly and Tanaka thought he scored in the 70th minute, but the goal was ruled out with a handball in the buildup.

Yoshida had the chance to score his second in the 78th minute after his defensive partner Shogo Taniguchi's header was saved, but the Sampdoria man dragged his effort wide from meters out despite the half of the goal gaping. Ueda then had a goal ruled out for offside in the buildup two minutes from time.

"Of course we wanted to end with a win. We made lots of changes so expected to be disjointed...but took too long to level after conceding," Yoshida said. "I'm so sorry not being able to give a win to the fans, who came in such numbers."

"But their support really gave us a huge power as we fought through the tough 10 games. We need to move forward as we aim to reach the last eight in Qatar...players need to go into the four (international) games in June in right conditions."

Dribbler Kaoru Mitoma, the two-goal hero against Australia on Thursday, excelled throughout in his first start for his country playing on the left, but failed to get a shot away in the stoppage time as they settled for a point against Vietnam, who finished bottom.

"We didn't have the variations in our attack when they sat deep. We needed more momentum in the second half," said the on-loan Brighton player. "I need to improve on every aspect of my game...to provide those moments that lead to goals." 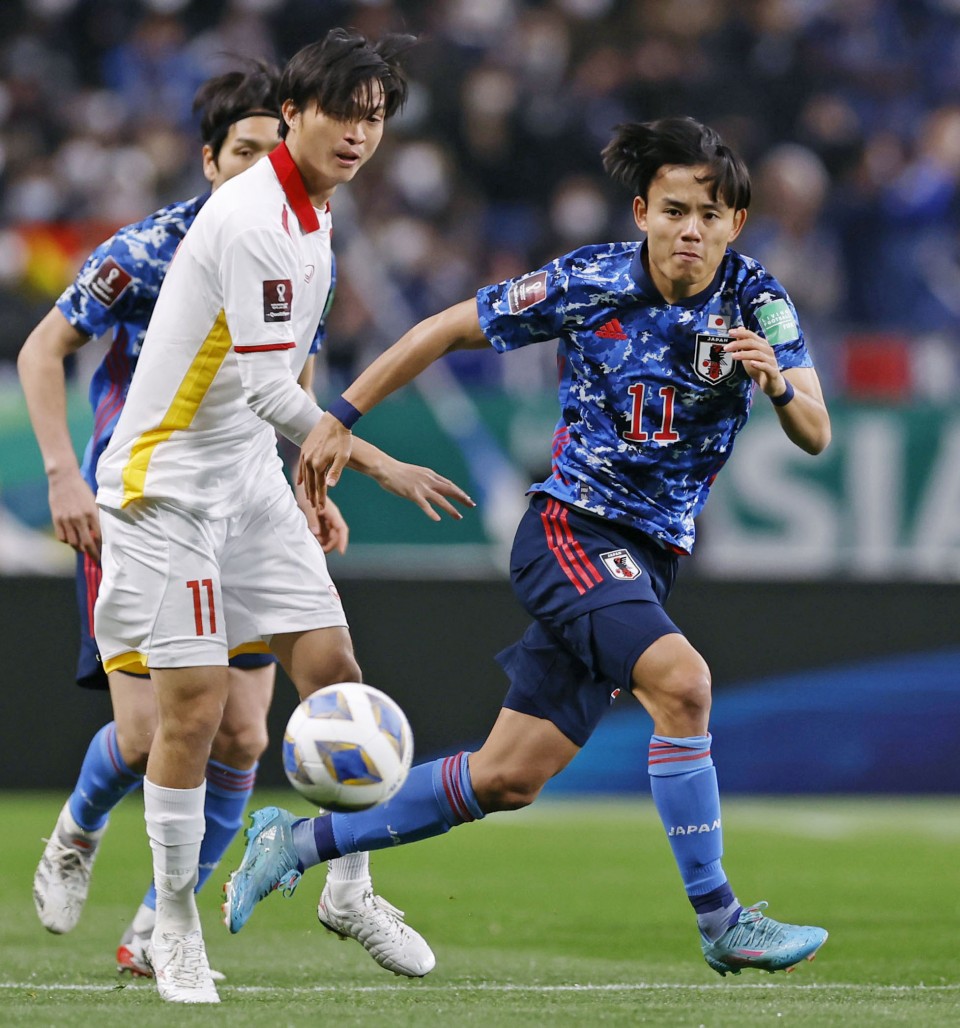 Takefusa Kubo (R) of Japan vies for the ball during the first half of a Group B football match against Vietnam in Saitama, eastern Japan, on March 29, 2022, in the final group-phase round of Asian qualifying for the 2022 World Cup in Qatar. (Kyodo) ==Kyodo 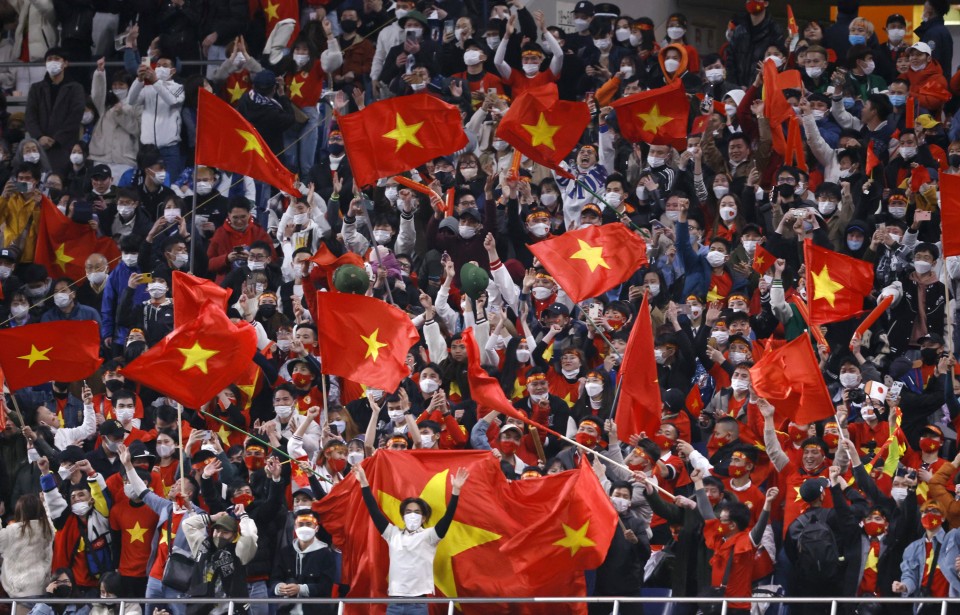 Supporters of Vietnam celebrate after Vietnam opened the scoring during the first half of a Group B football match against Japan in Saitama, eastern Japan, on March 29, 2022, in the final group-phase round of Asian qualifying for the 2022 World Cup in Qatar. (Kyodo) ==Kyodo