Russia is beginning an "invasion" of Ukraine, U.S. President Joe Biden said Tuesday, as he and other Western leaders moved ahead with imposing sanctions on Moscow in response to its ordering of troop deployments to two separatist-held regions in eastern Ukraine.

The situation over Ukraine escalated when Russia, which has been massing troops near Ukraine for months, recognized on Monday the two self-proclaimed republics of Donetsk and Luhansk as independent and ordered troops to be deployed there for "peacekeeping" missions.

"This is the beginning of a Russian invasion of Ukraine," Biden said at the White House, criticizing Moscow's action as "a flagrant violation of international law" that "demands a firm response from the international community." 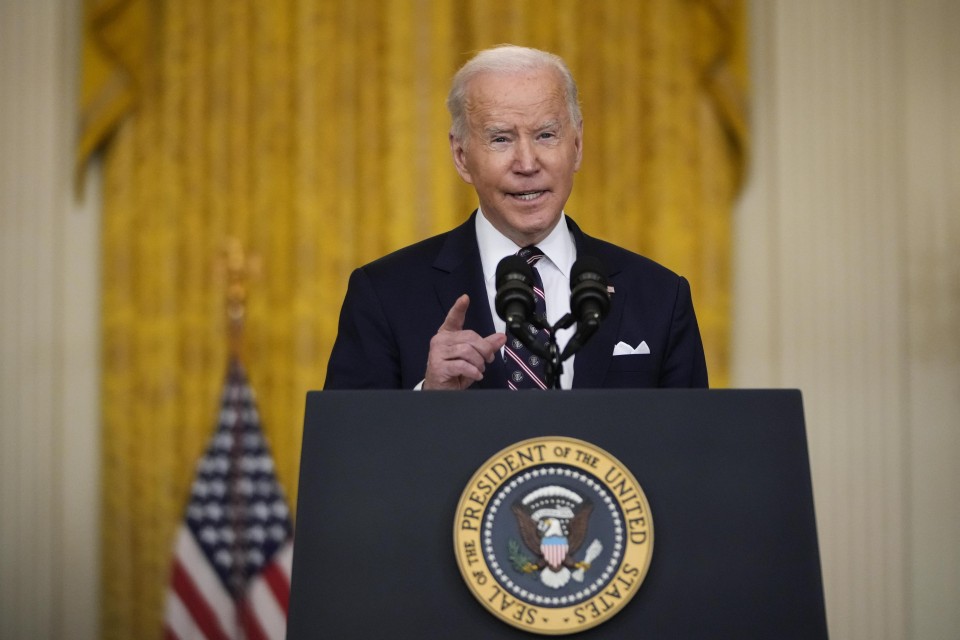 U.S. President Joe Biden delivers remarks on developments in Ukraine and Russia, and announces sanctions against Russia at the White House on Feb. 22, 2022 in Washington. (Getty/Kyodo)

Secretary of State Antony Blinken said later in the day that he had canceled a meeting with his Russian counterpart Sergey Lavrov scheduled on Thursday in Europe to discuss the Ukraine crisis, although he said the United States remains committed to diplomacy.

The engagement between the top diplomats was intended to lay the groundwork for a possible summit meeting between Biden and Russian President Vladimir Putin, which was to take place provided an invasion did not take place.

What Biden called "the first tranche" of sanctions will hit two major Russian state-owned financial institutions as well as five Kremlin-connected elite individuals and their families, and will impose restrictions on Russian sovereign debt.

The debt restriction will mean that the Russian government can no longer raise money in the United States and Europe, and its new debt can no longer trade in U.S. or European markets, according to a senior administration official who briefed reporters on the sanctions. 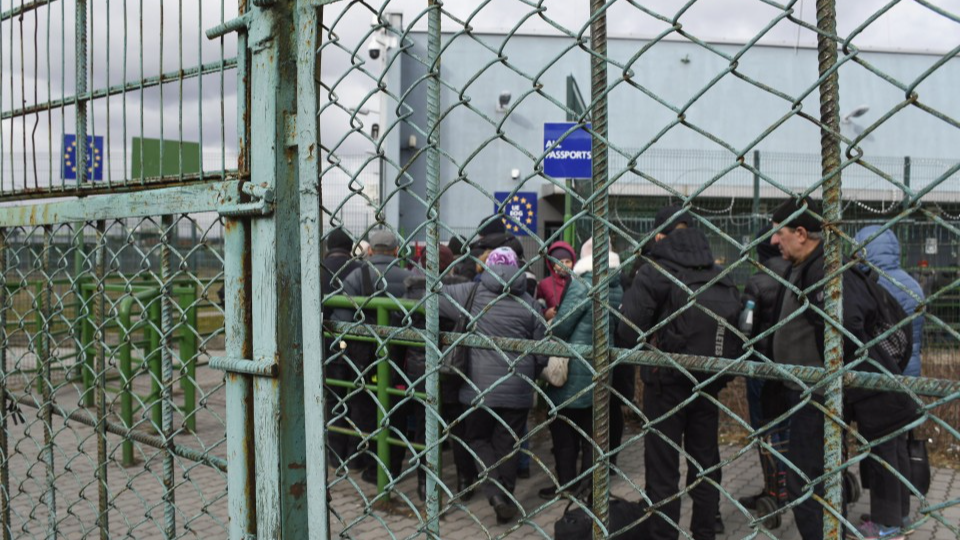 People wait to pass through the Shehyni checkpoint in western Ukraine to cross the border into Poland on Feb. 18, 2022, amid rising tensions between Russia and Ukraine. (Kyodo) ==Kyodo

"These (sanctions) have been closely coordinated with our allies and partners, and we'll continue to escalate sanctions if Russia escalates," Biden said.

The United States has been warning that the consequences for Russia in the event of a military escalation would be "far beyond what was implemented in 2014" following Moscow's annexation of Crimea from Ukraine.

The list has included economic and financial sanctions as well as export controls preventing the supply of sophisticated technologies to Russia, adjustments of the North Atlantic Treaty Organization's force posture in allied countries and additional assistance to Ukraine to enable it to further defend its territory.

British Prime Minister Boris Johnson on Tuesday announced sanctions on Russia targeting five banks and three "very high net worth individuals" who will face asset freezes in Britain and will be banned from entering the country.

German Chancellor Olaf Scholz, meanwhile, has said he will halt the certification process for a natural gas pipeline running from Russia to Germany under the Baltic Sea, a project that is feared could give Moscow greater leverage over Europe's energy market.

Germany's reaction to moves such as Russia's latest actions had been a matter of speculation, as Scholz had shied away from specifically naming Nord Stream 2, now fully constructed but not yet activated, as a potential sanctions target should Russia invade Ukraine.

The Biden administration, which has opposed the project, said Germany's decision means that the pipeline will "not become operational" and will relieve "Russia's geostrategic chokehold over Europe through its supply of natural gas."

The $11 billion investment "in a prized gas pipeline controlled by Russia" will now "go to waste," with Moscow losing what would have been "a cash cow for Russia's financial coffers," the U.S. administration official told reporters.

The foreign ministers of the Group of Seven nations, including Britain, Germany, the United States and Japan, agreed in a phone call Tuesday to condemn Russia's recognition of the two breakaway regions as a violation of Ukraine's sovereignty and territorial integrity, as well as international law.

Japan will work with the international community to come up with a "harsh response," including sanctions, Foreign Minister Yoshimasa Hayashi told reporters after the call.