In an hourlong meeting in Tokyo, Hayashi and Hun Manet, the eldest son of Hun Sen whose country holds this year's chair of the Association of Southeast Asian Nations, affirmed coordination in addressing the crisis in the military-ruled Myanmar, according to the Foreign Ministry. 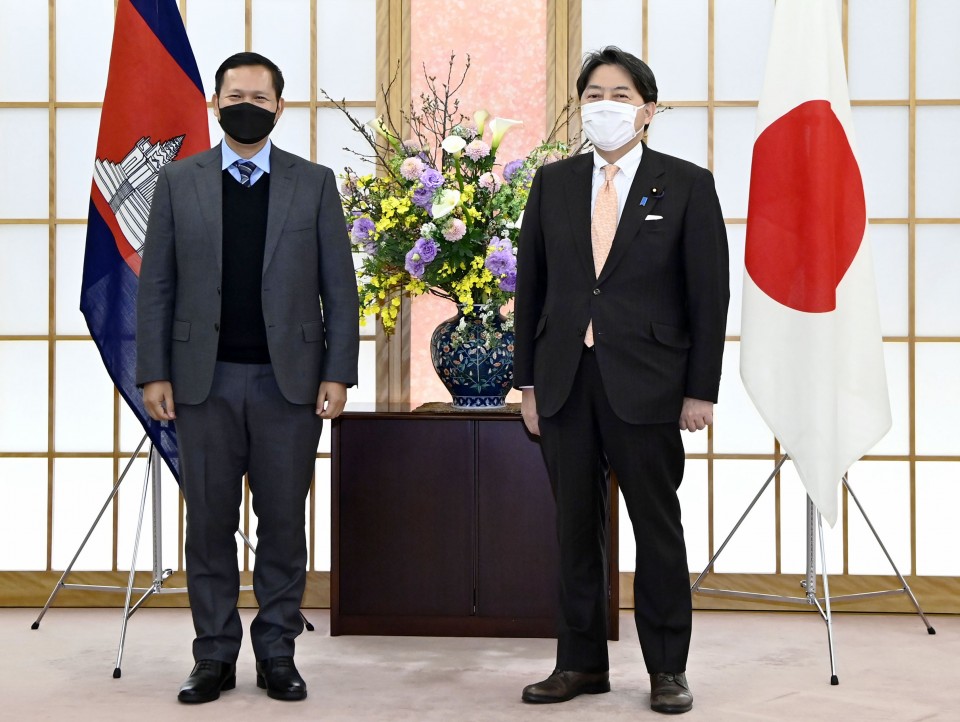 Japanese Foreign Minister Yoshimasa Hayashi (R) and Hun Manet, the eldest son of Cambodian Prime Minister Hun Sen and commander of the Cambodian army, are pictured ahead of their talks in Tokyo on Feb. 14, 2022. (Kyodo)

Hayashi was quoted by the ministry as telling Hun Manet that Japan will offer as much assistance as possible so Cambodia's general election in summer 2023 and local elections in June this year will be carried out "democratically and in a way that reflects a variety of voices of the people."

Hun Manet, the 44-year-old commander of the Cambodian army, was named the future prime minister by the ruling Cambodian People's Party in late December, following Hun Sen's remark that he wants him to be the next leader.

The party has yet to say when Hun Manet would succeed his father, who has ruled the Southeastern Asian nation for more than three decades.

Speaking at the meeting, part of which was open to the media, Hayashi said, "The Japan-Cambodia relationship is extremely solid, so I believe we can closely cooperate on challenges for the international community including the Myanmar issue."

Hun Manet briefed Hayashi about the situation in Myanmar after traveling with Hun Sen to the country's capital Naypyitaw in January for talks with junta chief Min Aung Hlaing.

Hun Manet is visiting Japan at the invitation of the Defense Ministry as this year marks the 30th anniversary of Japan's dispatch of Self-Defense Forces personnel to Cambodia as the first case of SDF participation in U.N. peacekeeping operations.

He is expected to hold separate talks with Prime Minister Fumio Kishida and Defense Minister Nobuo Kishi during his stay in Japan.