Japan will provide part of its liquefied natural gas imports to Europe from March as simmering tensions between Russia and the West over Ukraine undermine energy security in the region, industry minister Koichi Hagiuda said Wednesday.

Hagiuda told reporters after separately meeting EU ambassador to Japan Patricia Flor and U.S. Ambassador to Japan Rahm Emanuel that the Japanese government took account of requests from the United States and the European Union in making the decision, as well as a gas shortage in Europe. 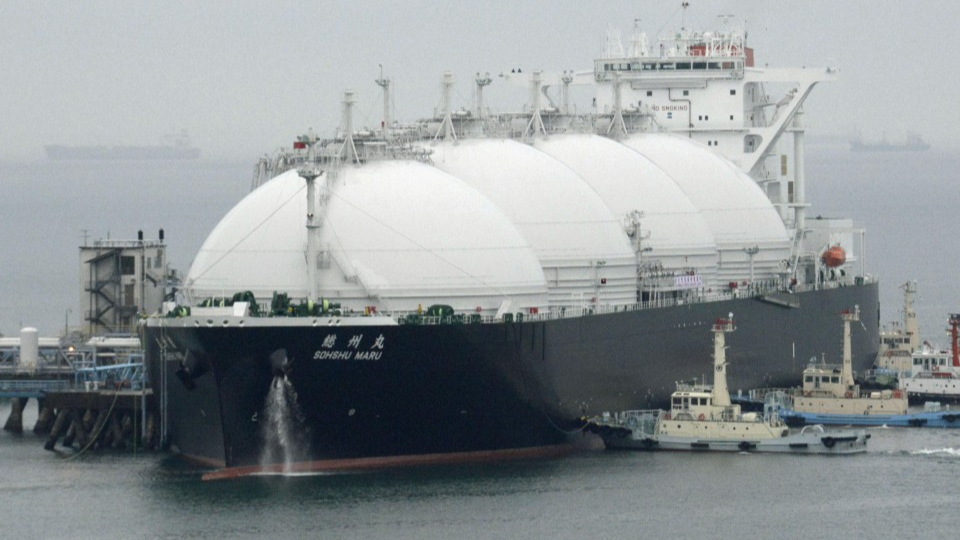 LNG supply in Japan is currently tight, "but we decided to meet the requests as long as a stable supply to Japan is ensured," Hagiuda said.

The government is asking Japanese companies involved in the LNG business for their cooperation even beyond March, Hagiuda said.

Japan, a major LNG importer, will secure enough supply for domestic needs before assisting European countries facing the threat of disruptions to their gas supply from Russia in the event of an incursion by Moscow into Ukraine, according to government sources.

With about 40 percent of Europe's imports of LNG coming from Russia, the United States has asked Japan to extend energy assistance to ensure stable energy supplies in the region during the winter.

The United States has warned of sanctions if Russia, which has massed troops near the Ukrainian border, invades. There is growing concern that Moscow could significantly restrict LNG exports to Europe in retaliation for Western sanctions.

To reassure allies of the North Atlantic Treaty Organization, the United States is sending additional troops to Europe, while Russia has accused the United States and NATO of ignoring security concerns related to Ukraine, a former Soviet republic.

At an energy council meeting in Washington earlier this week, the United States and the European Union affirmed their commitment to address risks related to the bloc's energy supply.

EU foreign policy chief Josep Borrell told the meeting that Russia does not hesitate to use its energy supplies to Europe "as a weapon for geopolitical gain" as energy prices surge worldwide.

U.S. Secretary of State Antony Blinken, noting Russia's state-owned companies are holding back natural gas exports, said Washington is in discussions with governments and major producers around the world to shore up energy supply throughout Europe, including Ukraine.

But in Japan, the growth in LNG demand for heating tends to outpace that of supply in the month of February, according to an energy industry official.

While Japan has a greater stockpile of LNG this winter than last, some in the energy sector believe it would be challenging to provide surplus LNG during February due to the possibility of a surge in demand.

The United States has urged Japan to consider imposing economic sanctions on Moscow if Russian troops invade Ukraine, according to diplomatic sources.