In a recent interview with Kyodo News, his first with Japanese media after becoming the official candidate last October, the former Gyeonggi Province governor said it is important to improve ties between South Korea and Japan for not only the people of the two countries but also for the peace and stability of the Northeast Asia region. 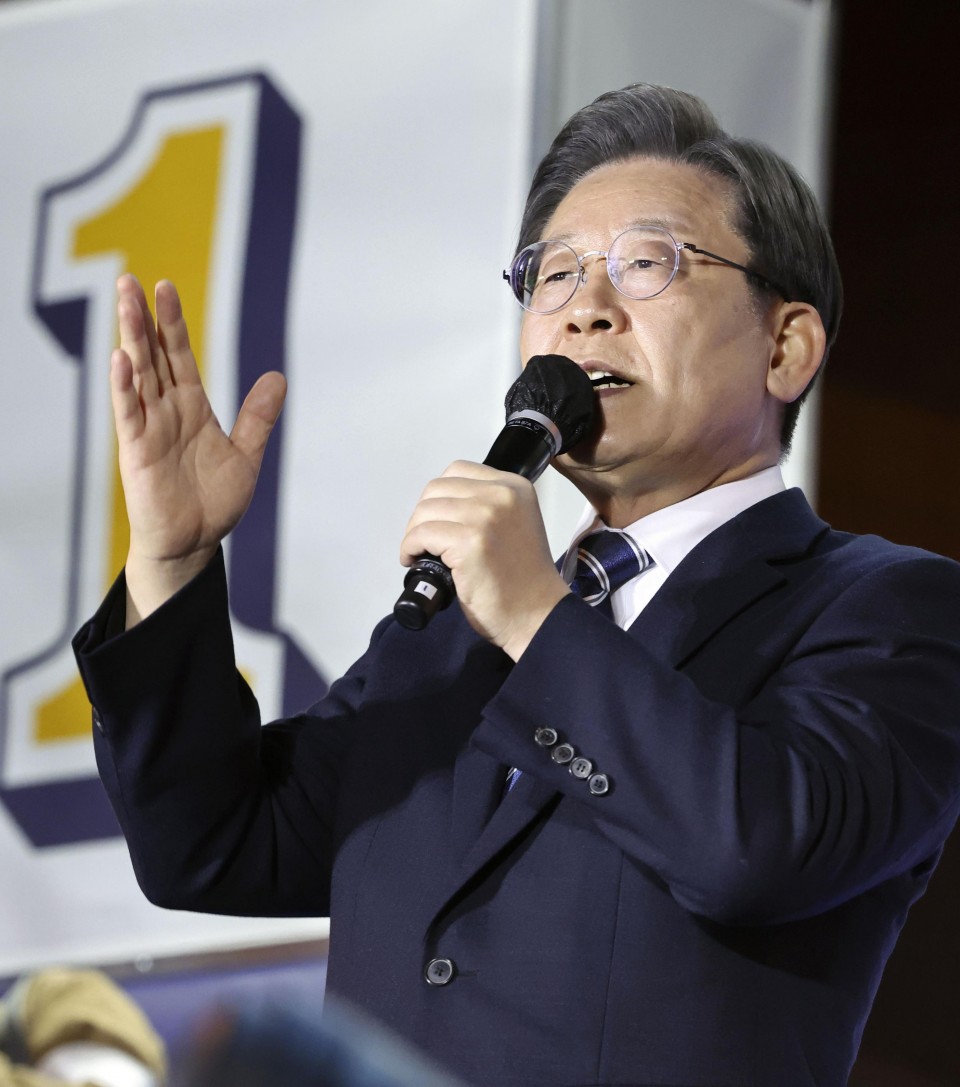 The two countries have not held an in-person summit since December 2019, as they have been at odds over issues such as wartime forced labor and the issue of "comfort women," a euphemism for women who worked in Japan's military brothels before and during World War II.

"I am ready to hold a summit meeting with the Japanese prime minister and start a dialogue to resolve the issues in a comprehensive way," Lee said, one of the two main candidates in the neck-and-neck race for the March 9 election to replace the current president Moon Jae In when his five-year term ends in May. In South Korea, a president is not allowed to seek re-election by law.

Still, Lee said in the written interview that the solution will have to come from the Japanese government along with a sincere apology on the historical issues.

"The South Korean government has proposed Japan have open discussions based on court decisions, but Japan has been refusing it," he added.

Japan maintains issues related to property and claims stemming from its 1910-1945 colonial rule of the Korean Peninsula were settled under a 1965 bilateral agreement.

Kishida said in December that he has no plans to review a 1993 statement apologizing for Japan's aggression in World War II and admitting the military had a role in coercing "comfort women" to work in brothels.

Lee also touched on the kidnapping of Japanese by North Korea in the 1970s and 1980s, saying that such acts should be condemned and must never happen again, comparing the abduction with the "comfort women" issue.

"The kidnapping of Japanese is a very serious issue and likewise, I think it is well understandable how South Koreans would feel about Japan kidnapping innocent young females to military brothels back in the colonial era," Lee added.

The candidate, however, said security cooperation between South Korea, the United States, and Japan is important to cope with increasing security threats from North Korea's repeated missile tests. The interview was conducted before Pyongyang's latest missile launch on Sunday.

He hinted that he would continue to operate the military-intelligence sharing agreement, saying he would make a decision as president responsible for national security.

The Moon administration had said that South Korea could scrap the General Security of Military Information Agreement, or GSOMIA, anytime, depending on the condition of South Korea-Japan ties that have been already strained.

"(South Korea and Japan) share the same goal of denuclearization of the Korean Peninsula in the face of North Korea's nuclear weapons," said Lee, adding that Japan could play a huge role in the peace and prosperity of the region going forward.

He pleaded with North Korea to halt firing missiles to bring back peace and stability to the Korean Peninsula and said the denuclearization process could be resumed if Pyongyang stops its missile program immediately after he takes office.

Lee showed his hopes to lift sanctions if North Korea responds to request for halting the program. But sanctions will be reimposed when Pyongyang discontinues the denuclearization process under a "snapback" clause, which was also used in the nuclear agreement between the United States and Iran.

Though it would not be easy to make assumptions, Lee said he is willing to have a summit with North Korean leader Kim Jong Un whenever is needed and make a meaningful agreement.

About joint military drills with Washington, to which Pyongyang shows strong opposition, the candidate said the exercises must continue to maintain the alliance between the armies of the two countries.

"But, (the drills) could be run flexibly as South Korea faces a twofold situation where it has to communicate and cooperate with North Korea," Lee added.