Japanese Prime Minister Fumio Kishida on Thursday urged Russian President Vladimir Putin to find a diplomatic solution that is "acceptable" to the countries concerned amid concern that Russia may invade neighboring Ukraine.

Kishida told reporters after the 25-minute teleconference with Putin that Japan opposes the use of force to change the status quo and will continue to monitor the Ukraine-Russia situation with "grave concern." The two leaders agreed to continue dialogue over the crisis in the Eastern European country.

Their first conversation on the Ukraine crisis took place as the United States and major European nations, such as France and Germany, have been stepping up diplomacy to avert a further escalation of the situation. 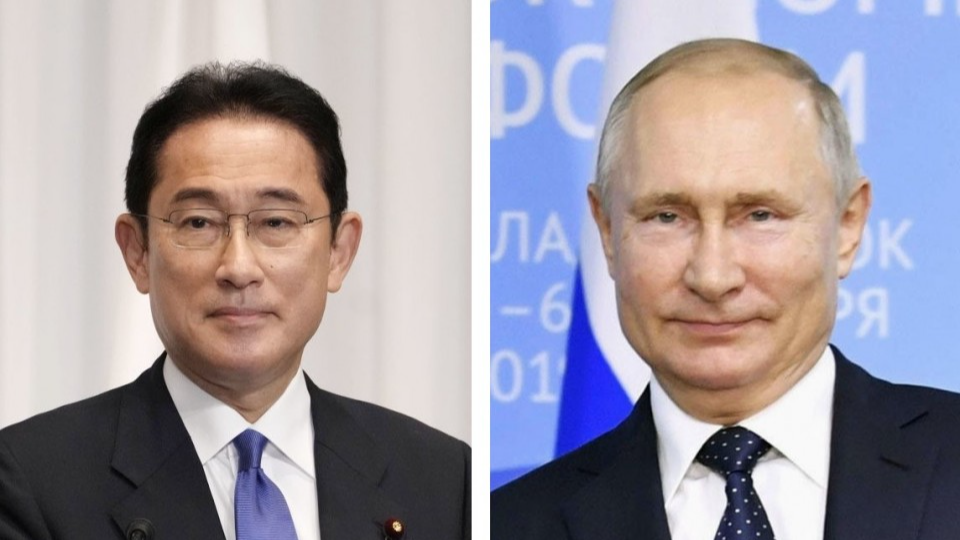 Putin told Kishida on the phone that Russia has no intention of invading Ukraine, a Japanese government official said.

Kishida said Putin conveyed Russia's positions on the situation but did not elaborate.

Russia has been seeking for a guarantee that the North Atlantic Treaty Organization will not expand eastward to include Ukraine.

Kishida's remarks reflect a sense of alarm about the escalating standoff caused by Russia's massive military buildup near the Ukraine border.

He also agreed with Putin to continue dialogue toward reaching a postwar peace treaty between Japan and Russia.

Tokyo and Moscow remain at loggerheads over the ownership of a group of Russian-held islets off Hokkaido. The decades-old territorial dispute has prevented the two countries from concluding the treaty.

Speaking at a news conference prior to the planned talks, Kishida said, "We need to work to ease the tension, given our relationship with Russia."

His remark signaled unwillingness to impose punitive measures against Moscow in the event of an invasion because such Japanese action would affect negotiations for the return of the islands.

Tensions on the border appear volatile. Russia has said some military units were returning to their bases from exercises near Ukraine, but the United States and European nations are skeptical about such a claim.

Kishida said Japan will coordinate with other Group of Seven industrialized nations and take the appropriate response as needed, but did not elaborate on what he and Putin discussed regarding sanctions.

Should a Russian invasion occur, Japan is considering imposing sanctions in step with the G-7, but taking this step may lead to a further stalemate over their negotiations on the bilateral treaty.

The crisis also comes as China's military buildup and its assertive territorial claims have been stoking concerns in the Indo-Pacific region, with tensions high between Beijing and Taiwan.

China regards Taiwan as a renegade province to be reunified with the mainland, by force if necessary.

"The Ukraine situation is extremely tense. If we allow any change in the status quo by force, it will send a wrong message, not only to Europe but to Asia and the rest of the world," Kishida said in Friday's press conference.

He underscored Japan's support for Ukraine's sovereignty and territorial integrity amid Russia's massing of military forces, and agreed with Zelenskyy they will make diplomatic efforts to ease tensions.

Leaders from the Group of Seven industrialized nations are considering holding a virtual meeting at an early date, possibly around Feb. 24, over the crisis in Ukraine, according to sources close to the plan.