Japan will relax COVID-19 border controls in March by raising the daily cap on entrants and cutting the quarantine period from seven days to three for both Japanese and foreign nationals, Prime Minister Fumio Kishida said Thursday.

The country's entry ban on nonresident foreigners, effective from late November to the end of February, has triggered a barrage of criticism for being too strict and not based on science.

Starting next month, Japan will set its limit on new entrants at 5,000 per day, up from the current 3,500. Within the daily cap, foreign nationals will also be able to enter the country for purposes other than tourism.

After arriving in Japan, they will be asked to quarantine for three days and required to test negative for the coronavirus on the last day of that period.

Those who have been vaccinated three times and depart from countries where infections are stabilizing will not need to quarantine. 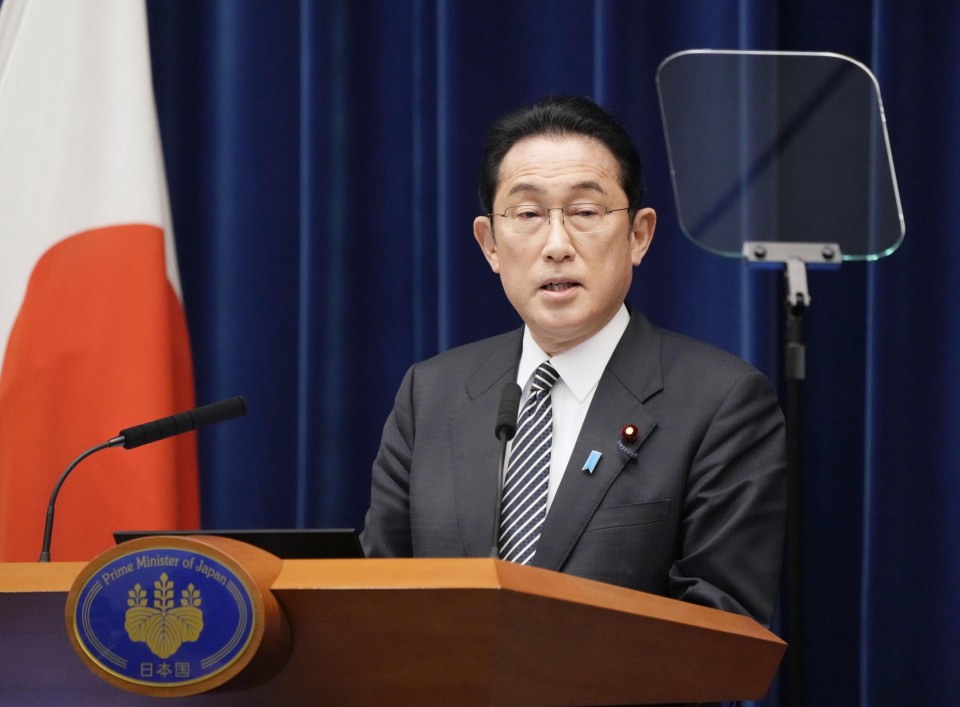 Japanese Prime Minister Fumio Kishida speaks at a press conference at his office in Tokyo on Feb. 17, 2022. (Kyodo)

"It is the first step in our gradual easing of the restrictions," Kishida told a press conference.

He acknowledged that Japan's border control measures will remain the strictest among the Group of Seven countries, saying it is "unrealistic" to relax the measures all at once.

"We will continue to consider how the measures should be by taking into account the infection situations at home and abroad, border control measures taken by other nations, and progress in the rollout of vaccine boosters (in Japan)," he said.

The latest decision came after the head of an expert panel advising the health ministry said Wednesday that the recent surge in COVID-19 cases likely "peaked" in early February.

Many of Japan's 47 prefectures including Tokyo are subject to antivirus curbs until early March to ensure infection numbers are on a downward trend.

Japan decided to impose the border controls at the end of November to keep the highly transmissible Omicron variant of the coronavirus at bay.

But students, businesspeople, academics and even lawmakers of the ruling Liberal Democratic Party have been ramping up pressure on the government to ease the restrictions.

Only a fraction of nonresident foreigners wishing to enter Japan have been granted entry as exceptions and the latest changes come ahead of the start of the new school and business year in April.

Business circles have blamed the measures for inflicting economic costs that far outweigh the benefits. The World Health Organization has recommended that nations ease or lift travel restrictions.

Despite the easing of the restrictions, Japan will remain a difficult country to enter for non-Japanese travelers among the G-7.

Britain and France, for instance, allow the entry of foreign travelers who can prove they have been fully vaccinated. Those who are not vaccinated need to test negative for COVID-19.

The United States requires foreign air travelers to show both proof of vaccination status and a negative test result.