A Japanese court on Tuesday ordered the state to compensate three people with disabilities over forced sterilization under the now-defunct eugenics protection law, awarding damages for the first time among similar suits filed with nine courts and their branches across Japan.

The Osaka High Court told the central government to pay a total of 27.5 million yen ($239,660) in damages to the three in western Japan -- a couple and a woman in their 70s and 80s -- and recognized the eugenics law as unconstitutional. 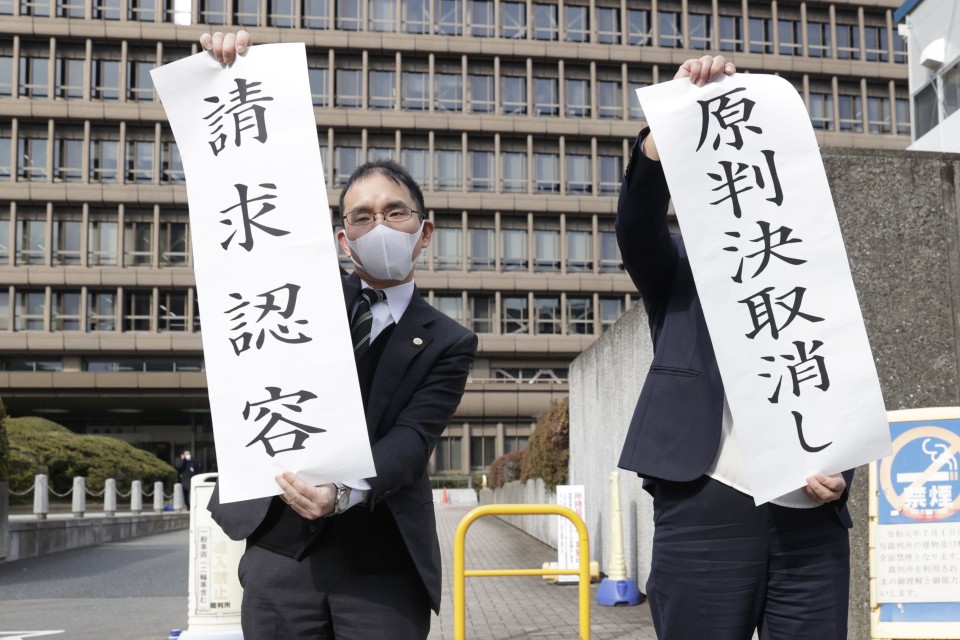 Lawyers representing plaintiffs in a lawsuit over forced sterilization under the now-defunct eugenics protection law hold up signs in front of the Osaka High Court on Feb. 22, 2022, showing the court's decision ordering the central government to pay damages. (Kyodo)

The couple is hearing-impaired and the wife underwent forced sterilization in 1974, while the other woman with intellectual disabilities did so in around 1965.

Some Japanese courts had earlier underlined the law's unconstitutionality, but demands for damages had been rejected on the grounds that the statute of limitations had expired 20 years after the forced surgeries. The three had sought a combined 55 million yen in damages.

Plaintiffs argued that the clock on the statute of limitations should not start ticking when the surgeries were conducted since it had been extremely difficult at the time for them to recognize the law's illegality and sue the government.

The Osaka High Court ruled in their favor, saying the statute of limitations should not be applied because doing so "extremely contravenes justice and fairness."

The ruling noted that it took so long for the plaintiffs to sue the state because it was extraordinarily difficult for them to access necessary information due to social prejudice and discrimination.

Calling the eugenics law "inhumane and discriminatory," the court also accused lawmakers of "negligence" for enacting it.

Welfare minister Shigeyuki Goto said the high court ruling is "very severe" for the state as its claim was rejected. Chief Cabinet Secretary Hirokazu Matsuno said the government will consider whether to appeal to the Supreme Court after examining the decision.

Plaintiffs across Japan were ecstatic about the ruling, and called on the government to apologize.

"This is great. This is a ruling that stands by the victims," said a sister-in-law of a plaintiff from Miyagi Prefecture in northeastern Japan, who became the first person to sue the state over forced sterilization in 2018.

"Our lives were completely destroyed. This is not about money. With this verdict, I want the government to bow in front of all the victims and apologize," said a representative of a group of victims and their families, who goes by the pseudonym Saburo Kita.

"Riding on this momentum, I want my case and others' to win," the 78-year-old said. A ruling on his case is scheduled to be handed down in March by the Tokyo High Court.

Between 1948 and 1996, the eugenics law authorized the sterilization of people with intellectual disabilities, mental illnesses or hereditary disorders to prevent the birth of "inferior" offspring.

About 25,000 people with disabilities were sterilized under the law, including around 16,500 who were operated on without their consent, according to government data.

After neglecting the issue for years, Japan's parliament enacted legislation in April 2019 to pay 3.2 million yen in state compensation to each person who underwent forced sterilization, but there was a backlash over the uniform amount.

Critics called it too little compared with the trauma imposed on those who had the surgeries, as well as disregarding spouses' suffering. They also criticized the government for not clearly mentioning its responsibility over the law's implementation.

As of late January, the government has authorized the lump-sum payment to 966 people, according to the welfare ministry.

In 1994, a disabled Japanese woman called for abolishing the law at the U.N.-coordinated International Conference on Population and Development held in Egypt, which became a catalyst for its abolition two years later.