The Kaga, one of the Japanese Maritime Self-Defense Force's two Izumo-class carriers, completed a rare mission last fall -- carrying judo uniforms from Japan to children in the Pacific island nation of Palau.

Placing the brand new judo kits, a total of 75 in all, packed in several cardboard boxes on the 250-meter helicopter carrier, was one way to avoid the high shipping costs required to send the uniforms, with the Japanese Defense Ministry carrying out the operation via the Japanese Embassy in Palau. Months later, the children's judo instructors say they have made a positive impact on the children's approach to the sport.

Jennifer Anson, the vice president of the Palau Judo Federation, said the new uniforms have become a big motivator for the children to train harder as some of them had never owned a judo uniform, or wore ones that were old, did not fit well, or featured the names of judo players who had donated used ones before. 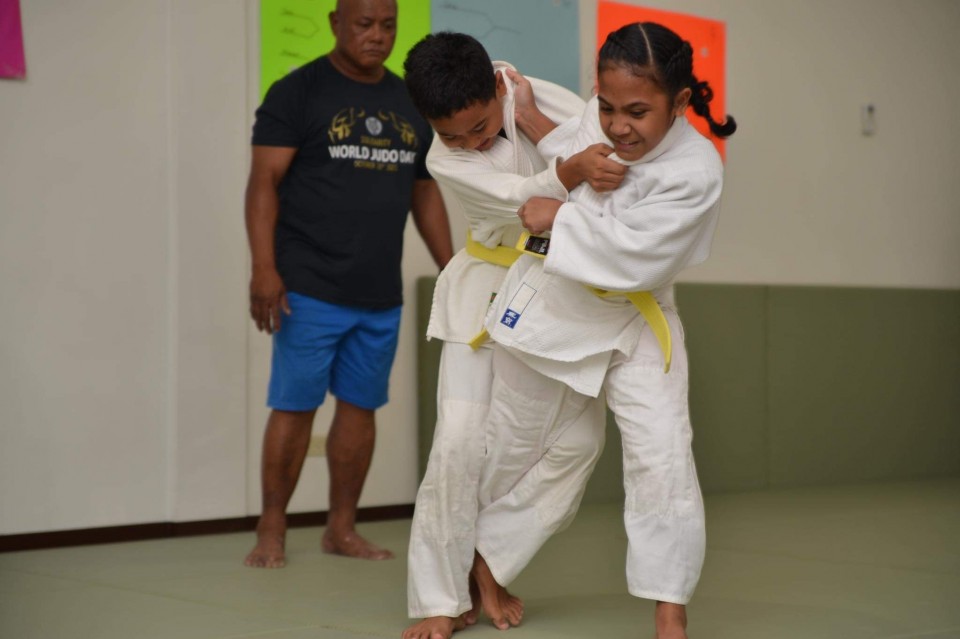 Recently, "the attendance rate (of the class) has been close to 100 percent," Anson, who is one of the judo instructors of the class of 30 children, said. "Their training and their performance improved in the sport because of the uniforms."

The children sent a video message expressing their thanks after the judo kits, including 50 for children and 25 for adults, arrived following Anson's request to Rieko Hayakawa, the head of Japan-based Palau Judo Kids Support Circle.

Hayakawa, who is also an expert on Indo-Pacific maritime security, immediately responded and purchased the judo kits for 453,750 yen ($3,900) through fundraising by asking people to donate via social media, including platforms such as Twitter.

Anson, an American-Palauan who competed in judo for Palau at the 2012 London Olympics, suggested that the sport contributes to youth development in the archipelago of about 18,000 people by keeping children "off the streets" and healthy as child obesity is a problem.

Hayakawa had launched the Micronesian Maritime Security Project in 2008 at the request of the presidents of Palau, Micronesia and the Marshall Islands. Japan's transport ministry, however, started using it as a means to force the governments to accept maritime ships. 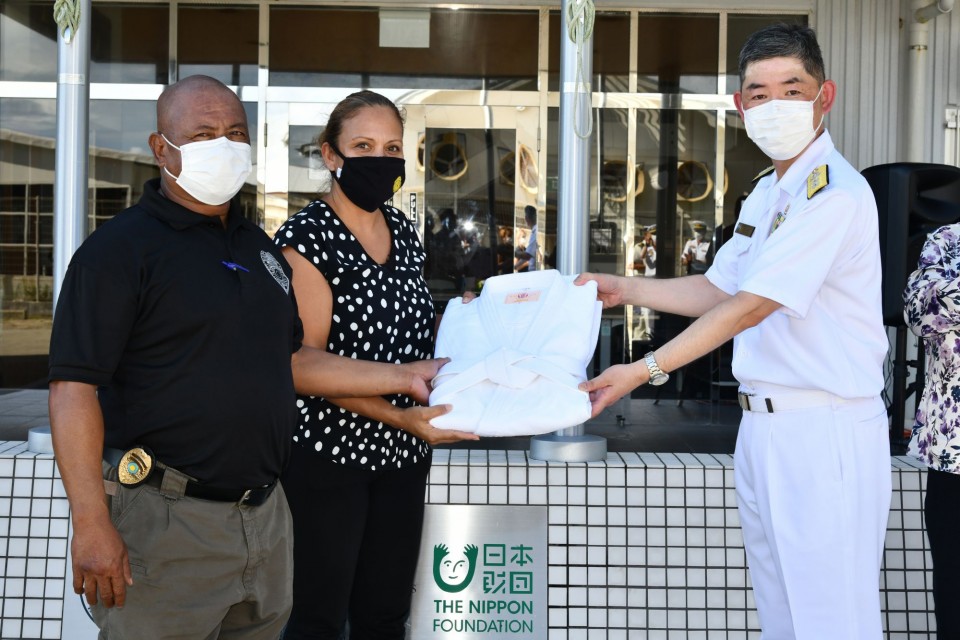 "The Palau side was disgusted that they were being forced to accept ships they did not need. I launched this project not for the benefit of government officials but for the security of the people of Palau," she said.

At the time, Anson, who was working for Palau's Justice Ministry, asked Hayakawa to assist in procuring second-hand judo uniforms for her classes. But this time, they were brand new.

The port call by the Kaga was made as the MSDF's fleet, also including two destroyers, a submarine and a patrol aircraft, were being sent to the Indo-Pacific region to conduct joint naval exercises. Dubbed the Indo-Pacific Deployment 2021, the mission took about three months from late August last year.

The support for carrying the judo uniforms showcased the importance of relations between Japan and Palau. "I think judo is one of Japan's great cultural, soft powers," said the Maritime Staff Office's Cmdr. Naoki Saito, who was in charge of the deployment plan.

"Judo is a great way to build relationships with people and to contribute to the development of young people," said Saito. "There was something about doing this that just clicked with me," he said, as he himself is a judo practitioner.

"The common denominator of martial arts is etiquette and manners," which can contribute to youth development, said Lt. Cmdr. Kuniaki Ito, a spokesperson of the Maritime Staff Office, a former practitioner of the Japanese martial art of Shorinji Kempo. 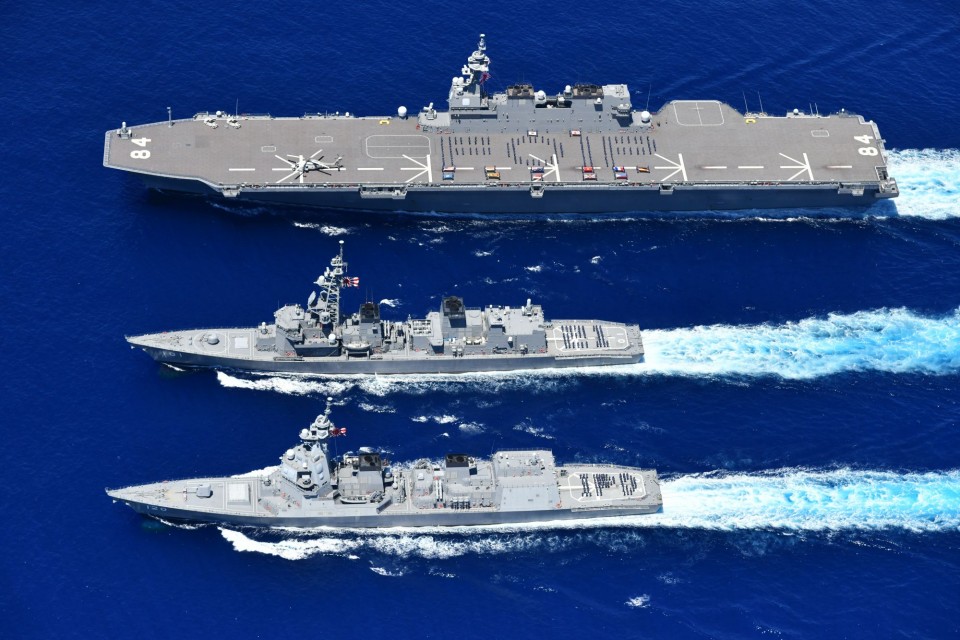 Anson, who also serves as the Palau government's National Security Coordinator, was pleased that, "They (MSDF) don't just focus on their exercises, but also participate in helping the community and providing support for something that's not part of training."

The MSDF wanted to highlight this fourth deployment visiting the Pacific island nation to strengthen cooperation.

When asked why the fleet was deployed to the Pacific, Saito said, "Although the mission name is Indo-Pacific Deployment, due to constraints, including because of COVID-19, we did not have previous opportunities to go to the Pacific Ocean, but mostly to Southeast Asia and the Indian Ocean."

It was the first time that the MSDF conducted joint military drills with Palau and Vanuatu, another Pacific island country. One of the destroyers also made a port call in New Caledonia, a French territory near Vanuatu, after conducting an exercise with the French military based there.

"The exercises are a form, of course, training our officers to improve their skills, but also as a way of deterrence," said Anson, the security coordinator, as the government is concerned about the Chinese activities in the region.

This is the activities of the JS KAGA, JS MURASAME, and JS SHIRANUI, IPD21 units.
🇦🇺🇫🇷🇻🇺🇵🇼
The JMSDF continue contributing to the realization of a #FreeandOpenIndoPacific through port calls to
like-minded countries and conducting multiple exercises with other maritime forces. pic.twitter.com/yTwkst15pH

The deployment comes amid increased security threats from China as it seeks to shift the status quo in the Indo-Pacific region in its favor through coercive measures and pressuring countries to abandon diplomatic relationships with self-ruled Taiwan.

Chinese research vessels have been entering Palau's exclusive economic zone and pressuring the government to sever diplomatic ties with Taiwan, according to Anson.

During a meeting with Ikeuchi, Palau President Surangel Whipps said, "We share the values of freedom and democracy and the rule of law" and preserving an open Indo-Pacific is critical for this cooperation.

"The annual deployment is to materialize a free and open Indo-Pacific," said Ito.

The free and open Indo-Pacific is based on values, such as freedom, democracy and human rights, a vision pursued from 2016 by former Prime Minister Shinzo Abe and carried on to the current administration of Prime Minister Fumio Kishida.